FREE DOWNLOAD: I Pledge Allegiance To The Grind II by Killer Mike

Released in July of 2008, I Pledge Allegiance To The Grind II

was supported by Grind Time/SMC/Universal Fontana Records. With appearances by Ice Cube, Chamillionaire, 8Ball & MJG, Pill and S.L. Jones, the independent effort would go on to appear in the Top 200, as well as be awarded HipHopDX’s Album Of 2008.

As Mike offers the 17 track release to new and old fans, DX asked him about some of the slept-on release’s magic.

From the intro, throughout the album’s many interludes, listeners can hear Mike’s spoken words of inspiration. One part sermon, one part diatribe, these soliloquies set the tone for the music. Asked about whether these highlighted interludes were rehearsed or staged, Mike credited it to some of his Grind Time producers. “The homie Chaotic Beats, who originally was on I Pledge Allegiance To The Grind I, him and Smiff & Cash…Pledge I was a declaration. It’s not a solidification, it’s just a declaration – ‘I declare myself free.’ Pledge II is me [embracing] my freedom and becoming my own boss, and I’m gonna tell you what Pledge III is gonna be later. You get the declaration, so when I’d work on that record, we’d say these things and talk amongst ourselves. Chaos would say to me, ‘You have to work like you have somebody else’s life in your hands. We’d go back and forth, just giving each other inspiration. We made Pledge I on the floor of a small house in Norcross, Georgia. We slept on the floor. We ate together, we slept together. Everything was done almost like it was a priesthood of sorts, like we were Jesuits or something. Through those things, we’d just give each other these talks. Chaos called it ‘the ghetto gospel.'”

Although those gospel sermons began on 2006’s I Pledge Allegiance To The Grind, they had deep purpose on the sequel. “When you get around to Pledge II, I don’t plan to do these diatribes that I do, these soliloquies. It’s just that the song calls for them. The emotion brings it out of me. So after I’m done with the song, I’ll go in over the track and I’ll just talk. What I try to do is just put people where I am, or project to them where I think they are, or what I think the future is gonna hold for them. Enough words to inspire, but so many that it becomes ho-hum and bores people, and brings people down. I really wish to uplift people. Those really are sermons, they are ghetto gospel.”

Within those words, and the lyrics of songs like “Can You Hear Me” and “You See It,” Mike says that he had a specific audience in mind. “To say that Pledge II is about being your own boss, it was because at that moment in time, everything had just started going bad – on a national level and on a global level. People were kind of seeing that it’s not gonna be good anymore, so people had to make drastic changes in their life to assert more control and authority. This is probably much to my demise, but I tend to think like the American male, in terms of what is going on in the American working-class male’s life right now. The guy that puts on a Coca-Cola uniform or a Fed Ex or UPS uniform…in Hip Hop, our lives are an extension of that. Whether a writer or a deejay, we’re built on working-class, blue-collar values, so I try to speak to those people. I think that what you’re hearing in the music is what’s to come, what’s happening now, and even some solutions. I think it’s needed, and I’m glad it’s appreciated.” 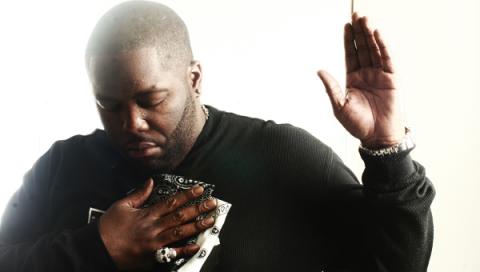 Particularly after the last two quarters, it’s worth noting that I Pledge Allegiance To The Grind II showcased Gangsta Pill, one of the breakout stars of 2009. Citing that Pill first appeared on “That Crack” in 2004 alongside Mike, Killer Kill pointed out their relationship, as heard on IPATTG2, “He’s my brother. My whole job in terms, in terms of Pill and S.L. Jones, is just making sure they get an opportunity. They have that opportunity, so my job is complete. I really just wanted to make sure everybody in Grind Time, but those two guys in particular, got they shot. With Pill being with Warner/Asylum, that job’s halfway done; we get Jones good, and my dreams will come to fruition. The morals, the music, the ethics, it’s all been there since we dropped ‘That Crack’ in 2004.” Bothered by the fact that his proteges are only now garnering recognition, Mike added, “It should not have taken five years for people to realize how dope he is. Pill didn’t get dope over the last year, he’s been that way. If you look at my final show for Mass Appeal in New York, before they closed down, that’s Pill and Jones with me.”

While Grind Time Gang members Pill and S.L. Jones added one dimension to the ’08 album, Mike also enlisted veterans Ice Cube and 8Ball & MJG to assist songs. With vocal allusions to Willie D and Too Short also on the album, Mike Bigga spoke to DX about the importance in looking backwards as well as forwards. “In terms of Rap and Hip Hop, if we don’t have a historical reference, then we’re just Pop music, and we’re gonna pop out. If you talk to a famous Rock guitarist, they’re gonna talk to you about Eric Clapton, they’re gonna talk about Jimi Hendrix, they’re gonna talk about Stevie Ray Vaughan and what inspired them. If they had the opportunity to play with these people, they’d play with these people. Thus, you get an Eric Clapton and B.B. King [Riding With The King] collaboration.” “If I want to make a pimp song, I know to listen to OutKast, 8Ball & MJG and Too Short; they give me a reference on how to grow. They did it out of thin air. Why wouldn’t I go get them and make dope music? I feel fortunate to be able to call Ice Cube and ask for a record. Unlike a lot of rappers today, who rap like people that came out in 2003, 2004 and 2005 – they don’t value those people; they just value they style. When a style affects you to the point where it changes your life, and who you are as a person, then that’s what you have with Lil Wayne and Jay-Z. That’s where I am with Ice Cube. Ice Cube shaped who I am as a man. I will always send him a track and very, very humble note asking him to consider doing this track. When he does, it’s always like the first track. When he did ‘Bad Day, Worse Day,’ it was that way, when he did ‘Pressure,’ it was that way.” Mike added that he feels the same way about ‘Ball & G and that Ice Cube has been asked to appear on I Pledge Allegiance To The Grind III.

Among the 17 tracks, Mike spoke about one of the singles, the Shawty Lo-assisted “2 Sides”

. The song, which announced Mike’s affiliation with both T.I. and Lo, was an anthem for a lot of the factions going on last year in Atlanta. Bigga was asked about the song’s prophecy for a lot of the struggles the ATL would witness in 2008 and 2009. “The future is always there for us to see. It’s all about who’s in tuned enough to see clues. The problem is that people are in tuned enough to see clues never look at it like, ‘This is the future. The ingredients that are going on around me will equal this.’ That’s what I saw happening in Atlanta. That’s the way Ice Cube spoke about the riots. He saw L.A. like a pressure cooker.” Going back to his song, Mike continued, “With ‘2 Sides’ and Atlanta, Atlanta was a different kind of pressure cooker. It was stewing. What I was talking about on that record, I felt it in the air, I saw it in the clubs, and I felt it in the way people were interactin’ with one another. It was a very surreal and weird experience for Atlanta. I don’t even think it’s something I consciously process. I think I just see things and turns into truth on paper or on the track.”

Breaking the details of upcoming projects, Mike Bigga pointed to S.L. Jones’ Y.S.L. (Why S.L.?) mixtape coming this season. After that, he expounded on I Pledge Allegiance To The Grind III, coming on Grind Time/SMC Records. Explaining its role in the trilogy, Mike told DX, “You know how you have that moment, you’re sittin’ at your desk, and you have that Fight Club moment where you’re like, ‘fuck this, I’m not a gerbil. I can’t do this anymore.’ You Jerry MacGuire it and jump out there. Pledge I is the declaration, Pledge II is the self-determinative moment. It’s Malcolm X without the Nation Of Islam, it’s Muhammad Ali fighting the US Government, it’s Huey Newton, it’s the dope-dealer that won’t pay taxes, it’s the working-class guy that wants to do something alternative to a job. Pledge III is gonna bring you to, ‘what happens when they take it all away from him?’ What happens when you get a call from the debt collector, child support, a job closing, probation, what happens when they close the barbershop? What happens when they take it all away?” “I got the music that’ll let you know it ain’t just you. I don’t have all the solutions, but I got some. I like to think people can listen to my music and apply it their lives. If you’re a drug-dealer, you can listen to ’10 G’s’

and you can meditate on how to get yourself out of the game. You can figure out how to buy a couple houses and get you some renters. My thing is, I want to be where the people are. I don’t know if I killed my career, or what it could have been, doing that. I could’ve chosen to floss and boss and do some stuff – not that I haven’t. I’ve bought some diamonds, I’ve rapped about it. You’ve seen some fast cars and things of that nature, but I chose to give people a little more of the other side. Maybe it’s the time now where everybody’s just fucked up enough to listen.” 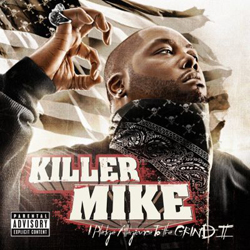 To download I Pledge Allegiance To The Grind II from Killer Mike, SMC Records and HipHopDX, click here.