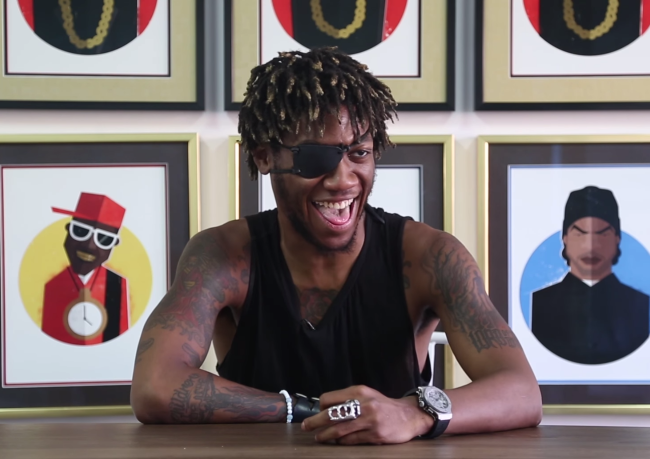 Atlanta’s rap rabel OG Maco has already accomplished so much since 2014 when his name became a household commodity thanks to a single that you can easily guess the name of. But all of that was put into grave jeopardy this past July when he got into a near-fatal car accident that resulted in the loss of his right eye — or so it was initially reported.

With a recovery time that rivaled one of Luke Cage, the 24-year-old “OG” was back in the studio within a month recording a few blocks from the HipHopDX offices. In just a little over 24 hours, he had crafted what came to be his comeback EP, Blvk Phil Collins and headed over to the DXHQ for the world premiere listening via Facebook Live (hit that like button if you have yet to do so; always big thing poppin’ over there).

Despite rushing things a bit, the project spoke to his resolve as a warrior and maniacal tendencies as an artist to win at all costs.

While speaking to DX, Quality Control’s nucleus cleared the air on how he survived his car crash, artists biting his style and the immenient takeover.

Even If OG Maco Did Lose His Eye For Good, This Interview Would Be The Exact Same

HipHopDX: A lot of this music takes an anthemic feel; it gives me that Mystikal “Here I Go” feel. Are these songs that we’re going to be listening to for like the next 25 years in concerts?

OG Maco: It don’t have a year on it! That’s some timeless shit. Even though I named it Blvk Phil Collins, one of my role models as far as showmanship coming up was always James Brown. That man … had fuckin’ fun with it! And we always thought, you know, “why use samples?” We can just bar it out and I think a lot of people think about me screaming and they just think of “Fuck ‘Em” and shit like and they forget like I ain’t screaming because I’m angry … I’m screaming you feel me because I’M LETTING IT OUT! So you know we got to a lot more of that within this project.

DX: This is a lot of energy; a lot of enthusiasm; a lot of focused musicianship for someone who just had a traumatic car accident…

DX: How do you get into a car accident … and lose an eye?

OG Maco: You know, it don’t happen like that. My face [points to right side of face] this whole part of my face is fake. This part just don’t exist no more. This is plastic surgery at its best. Even my eye; my eye will be back. My niggas will tell you, I look at them with two eyes all the time. It’s just not strong enough to be fully fucking around with it.

I can see out this eye! But it just ain’t healthy for me to keep it out and shit. If I keep doing that, I won’t be able to see out this eye. It’ll get infected so I gotta take my time with it.

DX: How long were you hospitalized?

OG Maco: I got the fuck out. I hated that shit. I hated the hospital. I was there long enough to be bloody, to be drugged and to take some good drugs home. Probably like two days, max. And that was after surgery and all.

OG Maco: Nah, I been through too much already. We survived way worse than car accidents and we lost way more than eyes. We got whole dead homies. We got homies locked up right now. So, at least I’m free. With a good eye! And in two months, I’ll be back to two eyes max. So who gives a fuck?

DX: What do you remember from the car accident? Was it like a fall-asleep-at-the-wheel scenario?

OG Maco: Nah, and I tell people who want to make it some crazy, epic story, it’s just a long-ass, drunk-ass night, bro. No extravagant shit. I wish.

DX: Usually when something like this happens, the artist’s next project is something along the lines of the depressed lines and doesn’t have any energy to it.

OG Maco: I’m motivated! I’m watching all my boys rise. We really came from nothing; the slums. I’m watching that shit and it’s fire because it means we’re doing it right. We depend on each other.

DX: Right after the accident, I saw you lash out on some people [on Instagram] over the eyepatch jokes.

OG Maco: Yeah, because that shit’s lame as fuck! If I punch your momma in the fuckin’ eye and she lose her eye, if I stab your dad in the eye and he lose his eye, if you little sister trip and fall on a fuckin’ branch and she lose her eye — then it ain’t funny!

But all of a sudden … you don’t know me! These niggas don’t know me. I got a thousand interviews and all these bitch ass niggas base me off of Twitter headlines. What kind of stupid shit is that??? A lot of y’alls girlfriends get fucked on Pornhub and we ain’t judging her! Like dead ass! Stop coming for my neck. Y’all niggas don’t know me — at all! And that’s what I try to tell them when they come chill with me; they be like, “Damn, OG Mac, you cool as fuck” and I be like, “Yeah, but you want to do that lame ass shit and base me off of Twitter and Facebook posts and all sorts of shit.” And really, I’m coming real direct and being real. I ain’t sell my soul; I ain’t sell out not one time. And y’all supposedly love a real nigga so much.

Is The Trap Music Lane Too Saturated?

OG Maco: I think that it’s super abused right now because the niggas [creating the music] don’t understand it. They got little pieces of it and they blow up off their little piece and that’s like what they do it for. And that’s cool, I don’t wish no failure on no man but at the end of the day, I made this shit! So I don’t give no fuck!

Niggas do what they do and they think they doing it well but whatever my nigga. It speaks for itself.

“I think a lot of people right now is confusing attention for talent. Just because everybody know you … they only know you because you did some conniving ass shit.”

Be real with yourself .. you ain’t the best. You ain’t nowhere near the best.

OG Maco: You know one of the biggest misconceptions of that I really want to clear the air on? A lot of people get on my neck about using Auto-Tune and that means you’re really not a fan of mine because I definitely started with it. Live Life had Auto-Tune running all through that muthafucka — from the first track to the last track. And people be swearing they diehard OG Maco fans! ‘If you didn’t switch up, we’d still fuck with you’ — you was never with me my nigga!

DX: Do you see Auto-Tune as an instrument or as a crutch?

OG Maco: Auto-Tune is an instrument! First of all, you can hear the different levels of niggas using Auto-Tune. [Young] Thug does not sound like your fuckin’ cousin, “Jerome.”

“Jerome” sound trash as fuck. We’re never gonna know “Jerome,” we know Jeffery. Stop playing like it ain’t some shit that take some time to use.

This generation is so keen on shooting people’s accomplishments down all because they feel bad about themselves and that shit lame as fuck!

And Live Life 2 is full of Auto-Tune! Live Life 2 dropped right after “U Guessed It” in the Rolling Stone and full of muthafuckin’ Auto-Tune with all them damn shits in the background that y’all praise all these niggas for now and the whole sound was on Live Life 2 and everybody is doing it now and it’s new.

OG Maco’s Blvk Phil Collins is available for purchase on iTunes and for streaming via his Soundcloud. Watch the end of the exclusive inteview for a preview of his debut album, Children of the Rage’s first single.