Establish an identity—real or perceived—and it can be hard to shake. Just ask Asher Roth, whose first decidedly non-Hip Hop look in cargo shorts and flip flops (gasp…Chancletas!) earned him the fate of being lumped together with Sam Adams and other “Frat Rap” acts. It probably didn’t help things that HipHopDX gave his debut Asleep In The Bread Isle a rating of two out of five. Suffice it to say, as the Notorious B.I.G. once rhymed, “Things Done Changed.”

The hair is longer; his music is pleasantly all over the place. When we ran into Asher Roth in Austin, Texas during South By Southwest his binge drinking consisted of water, and the only green he was taking to the face was in the form of a chicken Caesar salad. The song responsible for shaping many of our initial impressions of Asher Roth, 2009’s “I Love College” went platinum and hit the number 12 spot on Billboard magazine’s Hot 100 singles chart. His label, Loud/SRC has since struck a partnership with Def Jam, yet he hasn’t reached higher than the number 79 spot since (2010’s “G.R.I.N.D.”), and he seems perfectly cool with that.

In short, most of us were probably a bit quick to judge. But, to be fair, the guy behind Pabst & Jazz isn’t the same person or emcee he was in 2009.

HipHopDX: Everyone is focused on this new deal with Def Jam. What does it mean to you to be on this historic label with the lineage of Slick Rick, LL Cool J and Jay-Z?

Asher Roth: What’s crazy for me is that I’m coming from [Steve] Rifkind with Loud Records. So it’s like those are my two patches—Def Jam and Loud. It’s like “Do you know how much ground that covers? Oh my god.” It didn’t really hit me at first. I was just like, “Ah. Major label…I’m on a major label.” Then I copped the 25 Years of Def Jam book with all the pictures. So I’m sitting there looking through it like, “Wow…what a special time.”

Obviously the record industry and labels are a little tainted right now in 2012. With the Internet coming on and going full force, major labels are kind of pulling in the reigns with music and the sale of it. There’s kind of a control battle, and it causes people to look at major labels kind of cockeyed and ask, “Where’s your place in 2012 and beyond.” But with Def Jam you just kind of look through and you see the history of Beastie Boys, LL Cool J, and it’s like, “Oh my god. This is what it’s all about.” You see Lyor Cohen with the phone in his hand…he’s got the Zack Morris phone all the time. And it’s just really artist-friendly executives and a label that wants to put good, honest music out for the culture.

And that’s really what Def Jam embodies for me—the culture. It was New York in the ‘80’s. I just think, right now, we’re getting back to that. We’re getting back to putting out real, genuine, honest music for people and what’s going on right now. I kind of talk about it a lot, and especially in Hip Hop. Obviously Rock and Roll and Punk are very expressive about culture and society. But Hip Hop has always been like, “This is what’s going on right now, and this is how we feel.”

From the ‘90’s through the first part of the 2000’s it was kind of bling bling. There was a lot of making money, which was fine, because Hip Hop was making a lot of money. But we kind of lost that, “Hey this is what’s going on right now, and this is how we feel.”

So I’m excited because I feel like Def Jam is a good place to call home when getting back to that feeling of, “The world’s kind of crazy, so let’s use Hip Hop as a tool to get everybody to the table.”

DX: Creatively, you’ve hit a stride that is winning a lot of fans. Tell me how that goes on an artist first label looking at a sophomore album.

Asher Roth: It’s tough, because to me I don’t wanna get caught up in all the analyzing—like what people expect or how so-and-so views me. It’s been great because with the Rawth EP or Pabst & Jazz, both my fans and my new fans are actually witnessing progression. I think that’s the most important thing, because it’s like they’re growing up with me. I’m just figuring this shit out, because I got cast into it. I put out a mixtape, and the next thing you know, I’m on the cover of XXL. That’s a lot. In the art world, you’re coming out with something and you’re being met with just 360 degrees of judgment and criticism. You have people saying, “I could do that…blah, blah, blah” and all this other stuff. So I think you’ve really got to scale it back. Obviously when you’re first in, it’s a lot of criticism and a lot of stimuli. You can start nitpicking at yourself, like, “Am I pretty enough?” and that whole kind of American Beauty thing.

But you just kind of scale back and realize what’s important to you and prioritize. Then it’s like, “Okay. I just want to make music that I like.” And in direct relation, your fans are gonna like what you like. I’ve learned that, and I think that’s what you’re starting to hear. I’m just making music that I’m comfortable with and proud of. And the direct relation is my fans feeling like, “Hey I can really relate to Asher. I feel like he’s in a good place right now.” 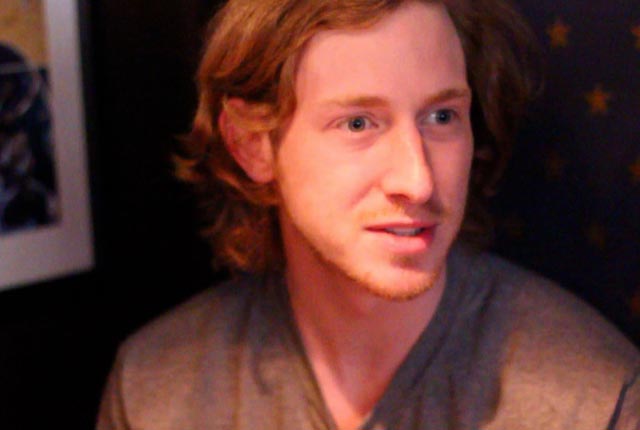 DX: In five years, you’ve managed to build up a rather diverse catalogue. Does your live show change from night to night…venue to venue?

Asher Roth: Yeah, absolutely. I hate to put my secret out there, but my live show is my everything. That’s why I root for [Big] K.R.I.T. so hard and [A$AP] Rocky. Those guys are not only making good music, but they also put on a hell of a show. I was talking to Alison about putting together a splash page for when we go city-to-city, because music is regional. You can see trap music in the South that doesn’t impact Maine. So we want to be able to say, “Hey we’re in Dallas. Here’s my discography. Vote for which songs you want to hear live.” So I’m always trying to figure out how to get the fans involved and have them control the experience.

That’s what’s really cool about music now. With my project, as an outsider looking in and a fan, you get to control the experience. A lot of times, an artist will just say, “No, this is the experience. This is the album cover, and these are the 12 songs in this order.” I’m more about asking what songs you want to hear and what order fans want to hear them in. You can pick your own album cover or draw your own album cover. We’re just trying to have some fun and let the fans be a part of it. To be honest with you, without them this doesn’t even exist.

DX: You mentioned Nottz, and every time we speak to him he sings your praises. Tell me about that relationship?

Asher Roth: I don’t even know how Nottz and I met. I just woke up one day, and I was on a leather couch in Virginia above a tattoo shop. It’s just one of those journey of life or fate things. Who would’ve ever thought, “Let’s get Asher Roth and Nottz in the same room?” But it’s one of those things that you can’t pinpoint or script. Who knows why he and I click? I don’t know if it’s an astrology thing where he’s a Gemini or something and we’re compatible. But to me, he just sticks to the script. He knows what he wants to do, and he does it well. He knows where he comes from, and he’s progressing too.

We’re doing another tape called Rawther. Travis Barker is on the drums, and it’s just like so stupid. He’s trying all these new things and messing around. Obviously, he’s a music guy. So he’s sampling all this Indie Rock—whether it be White Stripes or all this other stuff. It’s so dope to be with somebody I got in so early with when I was a little punk with my hair short and cargo shorts on. I was just kind of moving around, and Nottz saw something in me and told me to keep going. He’s not gonna talk your ear off. He’s just like, “Let’s go.” He’s all work, but he’s the man. He’s so funny and talks so much shit, but he’s not gonna put it all out there for you. I think that’s what’s so amazing about Nottz, because there’s still a little mystery involved with him. It’s not like he has his own clothing line or anything. He just does great Hip Hop music, and I’m excited for him because he’s starting to branch out. The new stuff that we’re doing is…I don’t even know if you can classify it as Hip Hop. It’s almost Rock music that’s coming from the boom bap, and there’s elements of psychedelic trip Rock [laughs]. I don’t even know. Nottz is such a mad scientist.

And the same goes for the other people I’ve been working with. It’s just creative people wanting to do some cool stuff and try new things. It’s like there’s no rules anymore. It’s just so fun, man.