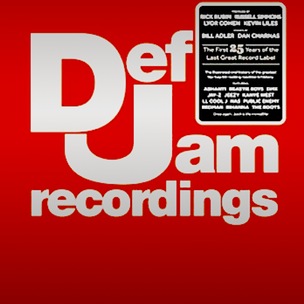 Flipping through the giant volume that is Def Jam Recordings (Rizzoli) is akin to flipping through your old high school yearbook. That is, of course, if your high school years spanned 20-some-odd years and the alumni became rich and famous after overcoming the traps of New York City streets and what have you. The characters in DJ25 are literally household names: Russell Simmons, Beastie Boys, Rick Rubin, LL Cool J. This volume is filled with their ups, downs, joys and sorrows and you, the reader, are taken along for the ride.

Weighing in like a brick, DJ25 is a coffee-table book, without a doubt. But, besides flyers and flicks of Hip Hop’s luminaries in their formative years, the writing that surrounds the visuals delves into the personal and business relationships that created Def Jam. Some big bylines are here, from The New Yorker‘s Kelefa Sanneh to author Dan Charnas. The book is the brainchild of Def Jam’s O.G. publicist Bill Adler, so there’s a healthy amount of content on Lyor Cohen and Russell Simmons’ synergy. There are direct quotes from Lyor and Russell describing the discontent that led to Rick Rubin’s departure, which indicate a clash of Type-A personalities – something all too common in the music biz.

The book moves at impressive pace front front to back. Really, it’s like a movie. By the time you’ve digested the story about Slick Rick and LL Cool J’s tour bus interaction, you’ll realize that you haven’t even gotten to Warren G‘s signing or anything relating to how Def Jam functioned under Antonio “L.A.” Reid and Jay-Z leadership.

DJ25 is filled with amazing photography that captures hip-hop’s formative era, and the reader won’t be able to help but appreciate the nostalgia that comes as a bonus if you choose to shell out $65 at your local Barnes & Noble (or $37 on Amazon) to cop the book. In this day and age, when blogs are preferred reading material to books, the sticker price might be too shocking to overcome for some. The book is well worth it, though, if you appreciate history and books in general.
There’s some irony in the fact that Def Jam isn’t defunct and this book is out. In fact, the label is not just alive and well but continuously putting out critically and commercially successful records, record after record. Don’t look too far back, as Big Sean made his mark on 2011 with his Def Jam debut, while Watch the Throne from Kanye West and Jay-Z also pushed the envelope as far as collaborations go. Behind the scenes, newly appointed A&R executives No I.D. and Sha Money XL are signing and developing the next wave of acts that will surely be included in DJ50.