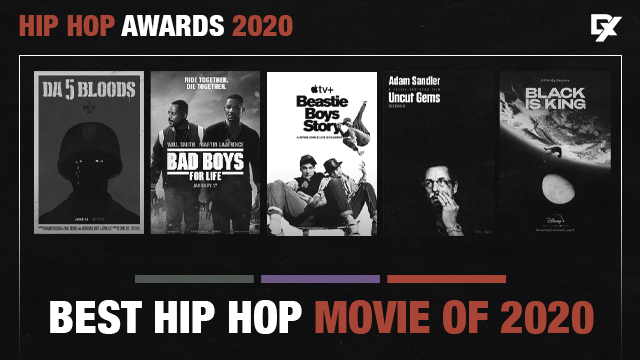 by Riley Wallace
0
In troubling times, nothing can help soothe anxiety like the act of getting lost in a great film. 2020 was (especially in the case of movies) uncharted territory. Worldwide lockdowns caused considerable setbacks — halting theatrical releases and shutting down production of highly anticipated films.
Luckily, many releases went straight to streaming, giving movie enthusiasts plenty of ways to entertain themselves while spending way more time at home than most were used to spending. This year, there was a lot to love — from the second last performance by the late Chadwick Boseman to Grammy Award-nominated documentaries.
Every year, HipHopDX staff joins in discussions, debates and sometimes heated arguments to come up with a list for our Year End Awards. Review all of our award categories and nominees before the winners are announced beginning December 28, 2020.
With the year drawing to a close, DX takes a look back at the five best Hip Hop movies of 2020.
Editor’s note: The cutoff for our awards was December 1, 2019 so Uncut Gems made the cut.

Initially, this film was set to drop at the 2020 Cannes Film Festival before hitting theaters in May or June. However, the unprecedented state of things saw the movie go straight to streaming via Netflix. Following four Vietnam vets who return search for their fallen leader’s remain — and a hidden treasure — the film served up an Oscar-worthy performance from veteran actor Delroy Lindo. Not to mention the late Chadwick Boseman in his second-last performance. It was the top streamed film in its first weekend and as of July, had been viewed over 27 million times.

Some of Our Favorite Movies Within Hip Hop Culture In 2020

Seventeen years removed from its second installment (and after a decade of setbacks), Martin Lawrence and Will Smith reprised their roles as detectives Marcus Burnett and Mike Lowrey in the third and final entry in the Bad Boys series. Dropping before COVID-19 shook up the world, it grossed a hefty $426.5 million worldwide, the third-highest amount in 2020. This makes it the most successful of the series and the biggest January film release of all-time.

Oscar-winning director Spike Jonze reunites with the Beastie Boys for this straight-to-streaming documentary that follows the legendary Hip Hop trio’s career (and friendship). COVID derailed the film’s rollout, halting an SXSW premiere and limited theatrical run. However, those setbacks did little to hamper its impact. The doc was nominated with numerous Primetime Emmy Awards, including Outstanding Documentary or Nonfiction Special. It also received a Grammy nod for Best Music Film.

Serving as a companion piece to The Lion King: The Gift (curated by Queen Bey for the film The Lion King), Black Is King made waves on and off screens — where it was hailed for its trendsetting hair and fashion statements. It was revealed during a Disney conference call in the discussion of quarterly earnings that the Disney+ platform had crushed its five-year growth projections in just over eight months, with this visual feast credited with earning it roughly three million new subscribers. After scooping up two awards already, Black Is King earned numerous additional nominations — notably a Grammy nod for Best Music Film.

This Josh Safdie and Benny Safdie-directed film makes an excellent case for being perhaps one of Adam Sandler’s best performances of all time. After creating a lot of buzz at both Telluride Film Festival and TIFF in 2019, it premiered in theaters on Christmas Day, scoring the second-best opening weekend numbers of 2019. Also starring names such as Lakeith Stanfield, Julia Fox, Kevin Garnett, it racked up numerous awards, including an Independent Spirit Award for Best Male Lead.

Christopher Nolan’s latest film starring John David Washington explores time, dimensions and parallel universes. Similar to Inception, this is a movie that may take multiple watches to fully comprehend. In terms of the film’s ties to Hip Hop, Nolan said Travis Scott’s outro track was the “final piece” to the movie.