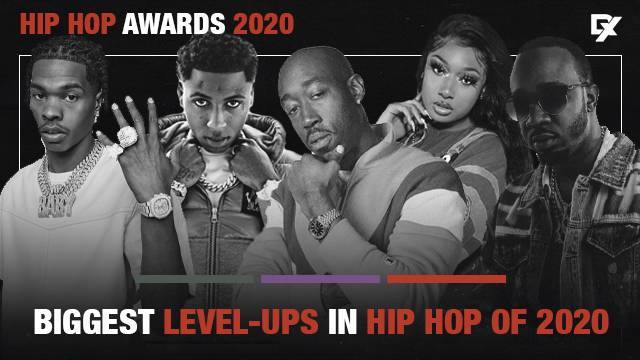 The music industry took a big hit as a result of the COVID-19 pandemic. Rappers weren’t able to do press runs or go on tours — and those are two essential things that are needed to be successful in that line of work. Because of that, leveling up in a time where nothing is really happening is a difficult task to do, but there was a select group of artists who managed to get it done.

The rappers on this list got right to work this year and didn’t let the pandemic stop their progression. Given they all had solid runs the year before, this group knew a little something about evolving. These rappers took what they already knew, tweaked it a bit and were able to separate from the pack to establish themselves as the breakout stars of the year.

They broke several streaming records, made headlines and the charts weren’t safe from the onslaught of music they were putting out. It’s also important to note each one released a project this year that either grabbed the top spot or are considered the best album of the year. That’s a remarkable feat, especially in a time where the music gets consumed so much faster and everyone is on lockdown with nothing to do but spend time listening to music.

Lil Baby’s 2020 was historical — from his sales to every feature, he didn’t miss. Benny The Butcher and Griselda reached new levels of success. Megan Thee Stallion got a Beyoncé feature and dropped her debut album while dealing with the aftermath of the Tory Lanez shooting incident. Freddie Gibbs continues to prove that consistently dropping high quality music will yield successful results. YoungBoy Never Broke Again continues to level up his streaming numbers, which were already the highest in the game.

Every year, HipHopDX staff joins in discussions, debates and sometimes heated arguments to come up with a list for our Year End Awards. Review all of our award categories and nominees before the winners are announced beginning December 28, 2020.

It was a Hot Girl year!

HERE ARE THE BIGGEST HIP HOP LEVEL-UPS OF 2020

The Butcher is here!

The Rabbit’s Grammy-nomination is well deserved.

Like the title of his No.1 album this year, the Atlanta rapper let the world know it was his turn.

Sean Don went back to his roots to make it back to the top.

After releasing Double or Nothing, Big Sean’s collaborative album with Metro Boomin, he went on a lengthy hiatus to deal with some personal issues. He made his triumphant return in 2020 when Detroit 2 gave Sean his third No.1 album.

Chika is a remarkable story of perseverance, hard work and determination.

The 23-year-old Alabama native went from viral Instagram rapper to Warner Music Group signee in less than two years and is steadily growing her star power with every move she makes. With the Industry Games EP her only proper release, it’s even more impressive she was nominated for a Grammy Award in the Best New Artist category earlier this month. Coupled with her NPR Tiny Desks appearance and acting debut in the Jamie Foxx-led Netflix movie Project Power, Chika is undoubtedly on fire

The Cactus Jack representative might be rap’s new hook man.

Don Toliver made his first appearance with a scene-stealing feature on “Can’t Say” off Travis Scott’s 2018 Astroworld album. The world got formally introduced to the Houston-born artist when his debut album gave listeners two hit singles in “No Idea” and “After Party.”

The Kentucky rapper saw a massive increase in streams from 2019 to 2020.

The curly-haired White kid from Louisville, Kentucky has been on a steady climb since breaking out in summer 2018 with his mixtape Loose. 2020 gave us a taste of what’s to come as the remix to his single “Whats Poppin” featuring DaBaby, Tory Lanez and Lil Wayne, which peaked at No. 2 on the Billboard 200.

She’s one of the realest out the South.

Mulatto has come a long way since being a contestant on Jermaine Dupri’s The Rap Game. She broke out in 2020 with songs such as “Muwop” featuring Gucci Mane and the remix to her hit single “B*tch from da Souf” featuring Saweetie and Trina. Her debut album Queen of Da Souf debuted at No. 44.

SAINt JHN has had one of the more quietest runs out of all the entries on this list. He’s released three studio projects but it was a DJ from Kazakhstan who remixed JHN’s hit single “Roses” that really brought attention to the Brooklyn artist.