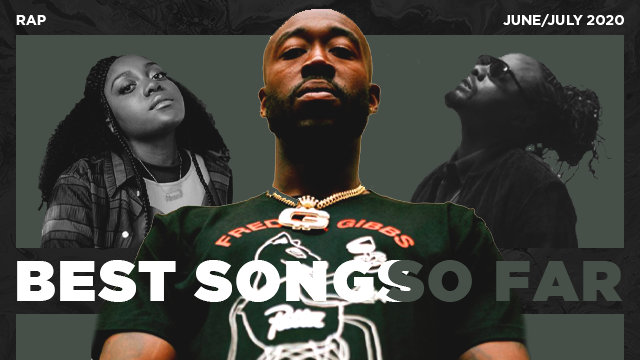 The past few months have felt like years due to all of the chaos happening in the world, but the one consistency has been the amount of good music that’s dropped in 2020. During June, a lot of timely songs were dropped to soundtrack the many protests taking place across the world in the wake of George Floyd’s murder at the hands of police. This month’s list includes new music from Lil Baby, Anderson .Paak and Wale.

HipHopDX is putting a spotlight on the tracks that stand out from the overabundance of releases throughout the year, highlighting everything from Billboard chart-friendly singles to essential album cuts. Check out our other lists below and follow our playlist, which includes all of the songs mentioned in this article:

For your listening pleasure, here is HipHopDX’s The Best Hip Hop Songs of 2020 … so far.

The ongoing Black Lives Matter protests sparked by the murders of George Floyd and Breonna Taylor at the hands of the police have inspired music from plenty of rappers. But none have quite captured the collective feeling of the moment as well as Lil Baby on the anthemic “The Bigger Picture.” Rapping with a beleaguered delivery about the systematic oppression caused by our broken institutions, Baby’s call to action strikes the right balance of being fed up with the police’s abuse of power, and cautiously optimistic that people uniting together can usher in the change this country so desperately needs.

Before Freddie Gibbs and Akademiks became fodder for internet buzzards, he dropped the surprise album Alfredo with beat magician The Alchemist. For the Benny The Butcher-assisted “Frank Lucas,” Gangsta Gibbs likens himself to the Harlem drug kingpin of the same name over Alchemist’s ominous production and peppers every second with pristinely crafted bars.

“WHAT’S POPPIN” became Jack Harlow’s biggest song on its own, yet the track got a major co-sign when three of Hip Hop’s biggest stars jumped on the remix. DaBaby, Lil Wayne and Tory Lanez brought their respective styles to the cut and only made it better in the process. But most impressive of all is how Harlow still stands tall, proving he’s more than ready to compete alongside the heavyweights in the rap industry.

Although Noname later expressed regret for issuing this response to J. Cole’s perceived “tone deaf” single “Snow On Tha Bluff,” the Chicago rapper seized her moment and murdered the Madlib-produced beat while setting the Dreamville boss firmly in her crosshairs. With lines such as, “But niggas in the back quiet as a church mouse/Basement studio when duty calls to get the verse out/I guess the ego hurt now,” she made it abundantly clear she can handle her own.

The acidic mix of coronavirus blues and red-hot racial tensions has left plenty of Americans feeling empty and deflated. On his soothing protest anthem “Lockdown,” Anderson. Paak offers the world mild sedative for their rage while keeping them on course to upset the bigger system.

Freddie Gibbs and Alchemist’s surprise album Alfredo is filled with excellent music, but the soothing sounds of “Something To Rap About” make for one of the best listening experiences in Hip Hop this year. Gangsta Gibbs floats on ALC’s beat, dropping jaw-dropping lines such as “God made me sell crack, so I had something to rap about. Tyler, The Creator’s guest verse is icing on the cake, adding a little extra flavor to this delicious Alfredo cut.

“Walking In The Snow” – Run The Jewels

Run The Jewels dropped their RTJ4 album at a fitting time, providing a much-needed soundtrack for the unrest caused by the COVID-19 pandemic and the police killing of George Floyd. Amid all the social commentary, the Gangsta Boo-assisted “walking in the snow” proved to be eerily prescient. Killer Mike’s “you watch the cops choke out a man like me/Until my voice goes from a shriek to whisper, ‘I can’t breathe’” lyric was recorded as a reference to the late Eric Garner yet accurately described Floyd’s murder despite his death occurring just one week before the track was released.

The masked singer proved that he’s worth the hype on his debut album DRUG DEALING IS A LOST ART. The genre-bending album has whiffs of Pop and Country, all while remaining undeniably Hip Hop. “WELFARE” puts RMR toe-to-toe with Griselda’s Westside Gunn for a trap ballad. Gunn’s belligerent adlibs paired with RMR’s smooth, soulful vocals make this track one of 2020’s best.

Between nationwide protests and coronavirus quarantines, there is no doubt that 2020 is unlike any other year in history. At such a unique time, there isn’t much music to capture the feeling, but Wale’s new EP The Imperfect Storm portrays the mood of so many living through this year. On “MOVIN’ DIFFERENT” Foloron tackles complex issues like the media’s portrayal of protests, riots, Los Angeles curfews, the militarization of police and not-so-sober quarantining.

Once again, Compton-bred rapper YG has used his power for good. Instead of calling out Donald Trump like he did with 2016’s “FDT,” now he’s taking aim at corrupt police with “FTP (Fuck The Police).” Again, timing played an integral role in the unharnessed power of the track. With protests and riots breaking out across the globe in the name of George Floyd and racial equality, YG’s words resonate louder than ever, especially lines such as, “Murder after murder after all these years/Buy a strap, bust back after all these tears/Mommas cryin’, how they gon’ heal? (How they gon’?)/How you would feel?”

The gritty and violent tales from some of the most traumatized street rappers endlessly fascinate those who haven’t experienced that life. To these wannabe hustlers, selling drugs, dodging bullets and shooting Glocks would be “so lit, bro,” leaving them wishing they could live out their gangsta fantasies. What’s forgotten, as allegedwrongly incarcerated L.A. rapper Drakeo The Ruler points out on “GTA VI,” is most don’t live that way because it’s fun: they do it to survive. Drakeo’s sobering cautionary tale of what happens when you treat life like it’s Grand Theft Auto haunts the listener long after the cracks of the GTL phone line fade out; a reminder there is no respawn if you fuck up in real life.

Much like Run The Jewels’ RTJ4, Public Enemy’s first song since 2017 seemed to arrive right on time. With production from the inimitable DJ Premier, the in-your-face, anti-Trump anthem erupts with Chuck D’s booming voice and Flavor Flav’s familiar ad-libs as Preemo and DJ Lord tear up the 1s and 2s. The groundbreaking Hip Hop group followed up the track with an explosive rendition of “Fight The Power” at the 2020 BET Awards alongside Nas, Questlove, Jahi, YG, Black Thought and Rapsody.

Given the way Freddie Gibbs has been Deebo’ing the rap game in 2020, it’s only right the bluesy yet cocky “Skinny Suge” is his new national anthem. Overtop The Alchemist’s stingray guitar loops, Gangsta Gibbs literally raps his way out of a paranoia-driven psychosis to emerge as Hip Hop’s top draw this year.