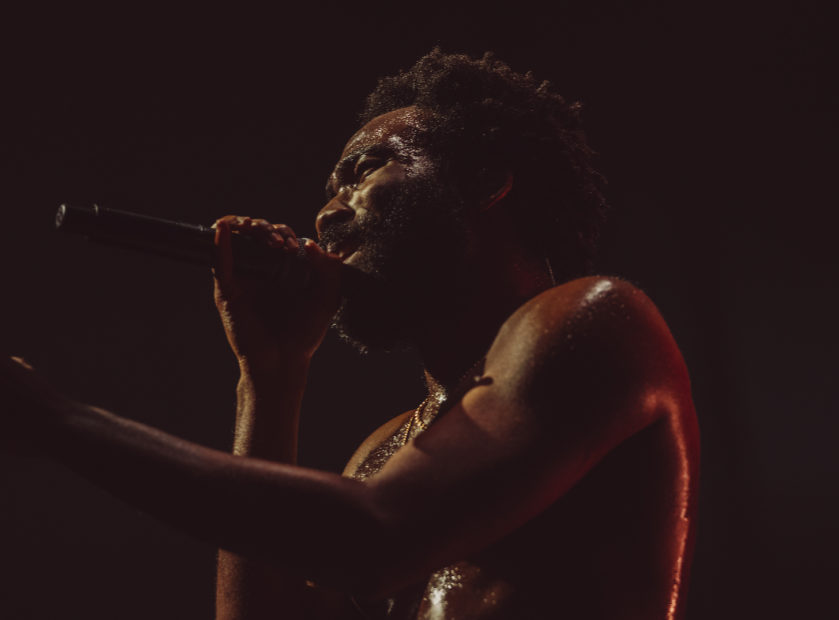 There was a time when much of Childish Gambino’s identity revolved around the life of “The Boy,” and the narration of his coming-of-age story that honed in on many of the bumps and bruises he picked up along the way.

Dating all the way back to his 2011 debut Camp, the boy has been an integral character threading together Gambino’s discography, reappearing at different life stages in the music, the videos, or, of course, the 75 page-screenplay.

We’ve seen him as the heartbroken young camper alone on the bus at the end of “That Power” and the half-alien creature hurling bodies through the forests of Kauai in “Telegraph Ave,” but lately he’s been a much more mature figure, hitting soulful notes in a funkier, more experimental realm as he looks to leave the childish persona in his past.

And if you still had any question as to whether or not Donald Glover had completed the transition into manhood, watching the fully bearded creative drop to his knees at the Forum to wail at the top of his register would certainly be enough to sell you.

Donald Glover has been his most liberated self for all of 2018, landing at number one on British GQ’s list of best-dressed men while shirtlessly dancing through the madness during his attention-arresting “This is America” video.

Sprinting across the stadium on Sunday (December 16) night, Gambino was just as unrestrained inside The Forum during the Los Angeles stop of his tour, doing everything humanly possible to reach the masses for as long as he held the spotlight. At one moment he popped up in the upper deck to passionately sing “Stand Tall” while the people in his section dreamily stared in awe; at another, he was barreling his way through the front section while belting out grand vocal riffs to the tune of “Redbone.”

Even when he was off stage, he was on full display for all in attendance, blown up on the video screen while holding his hand to his ear as the crowd roared for him to return for an encore.

As recently as two months ago, the future of the tour was muddied after he injured himself while performing in Dallas. Shimmying his way across the stage and hopping to the beat in L.A., however, he looked to be fully healed, even leaping to smack an overhead pipe while walking backstage at one point during the performance. As he crawled on all fours during a stripped-down rendition of “Riot,” a fan excitedly cried out “Hey, Simba,” referencing his upcoming role in the live-action remake of the Lion King slated to hit theaters in 2019.

Got in a Lyft without tickets. Ended up here. #firstrowworkwives #childishgambino #staywoke

Glover has played a plethora of personalities in his career, from the lovable yet innocent Troy Barns in the Community era to the cynical, cunning manager known as Earn on Atlanta. At the Forum, his character often seemed to be the crazed, intense messenger hell-bent on sharing his truth to the audience, with a compulsion from a higher power that was evident in his wide eyes and over-exaggerated movements. More than a few times, he expressed his desire to have a church-like experience rather than a standard concert, calling upon the congregation to leave their cool at the door and shake off their demons without fear of judgment.

Singing “Have Some Love” at the top of his lungs with the support of a gospel style choir behind him, he did more than take the onlookers to church, transporting the building to outer space with enthralling graphics and flashing lights that beamed their way across the room. When it came time for the final beat drop on “Sober,” he finally received the massive crowd response he had yearned for the entire night, with people in the floor section, lower bowl and nosebleeds alike bounding upward with glorious jubilee. Elsewhere, when he showed signs of fatigue from all the commotion, the crowd ensured that their appreciation would be heard, screaming words of praise and worship toward the stage as the hypnotizing preacher lay flat on his back while gasping for air.

Of course, there was another reason for the heightened sense of urgency that permeated the program: the sobering announcement that this would be the final Childish Gambino tour. He’s certainly accomplished all he set out to do when he typed his birth name into the Wu-Tang Name Generator, and now he’s ready to chart a new course, redefining himself and testing his creative talents in new waters. It’s a reality that has been on the horizon for years, but it’s inevitably a hard pill to swallow for his ever-devoted following, who have followed his growth ever since he was rapping his way through an empty warehouse in the iconic, unzipped red hoodie.

If this is truly the end of the road, it’s been a wild ride; one filled with lofty pinnacles and astounding achievements that will surely be chronicled into the history books until 3005 and beyond.