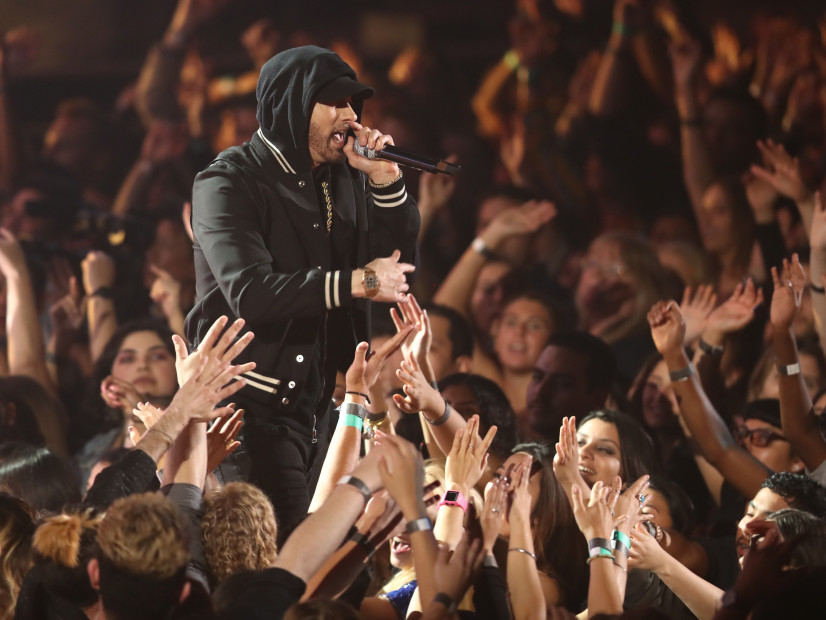 Pressing The Issue: Why Eminem's Critic Criticism Is Problematic

When you’re a journalist, you become used to being hated.

It comes with the territory. I’ve been told that I should have been molested, should kill myself, should “die slow,” and have been threatened with violence because people didn’t like what I wrote (or didn’t write).

I try not to take it personally, which is why I’m not mad at Eminem’s intense ire for the media on his latest album, the blistering Kamikaze. I’m disappointed, though. And, a little concerned.

A brief rundown: Shady dropped Revival last year, and fans and critics alike called the album mediocre at best and trash at worst. Em responded with the furious “Chloraseptic (Remix)” and returned with a surprise album last week.

He came out swinging on the opening cut, “The Ringer”: “But sayin’ I no longer got it/’Cause you missed the line and never caught it/ ‘Cause it went over your head, because you’re too stupid to get it/’Cause you’re mentally retarded, but pretend to be the smartest/With your expertise and knowledge, but you’ll never be an artist.”

“But my beef is more media journalists (Hold up, hold up, hold up…)/I said my beef is more meaty, a journalist/Can get a mouthful of flesh/And yes, I mean eating a penis/’Cause they been pannin’ my album to death/So I been givin’ the media fingers/Don’t wanna turn this into a counseling sesh/But they been puttin’ me through the wringer/So I ain’t ironin’ shit out with the press.”

In defense of those cutting, albeit hilarious lines, some of the criticism was not fair. Joe Budden’s nit-picking of Revival’s tracklist before hearing the album, fans overlooking the album’s lyrical complexity, and people being so quick to yank him from their Top 5’s all was unwarranted. However, there was plenty of valid criticism, and Eminem didn’t discern between the two on Kamikaze. In failing to do so, he made himself sound like the sitting president he so detests.

To be clear, Marshall Mathers and Donald Trump are nothing alike. Eminem is smart enough not to, at least in his thinking, throw a shit-blanket over the American media the way 45 does. I also realize that using criticism as fuel for good music is what Eminem has done throughout his career. His magnum opus, The Marshall Mathers LP, was a blazing clap-back at people who decried his music as hate-speech. He ramped up the gay slurs and misogyny to make a point about free speech and the difference between art and reality, as well as to piss off his detractors. It would be hypocritical of me to scream “you can’t say that,” when I enjoy his other albums.

Still, as Eminem knows, our country is facing dangerous and turbulent times. Trump’s never-ending assault on the free press has led many Americans to buy into the notion that the media is “the enemy of the people.” Angry men and women are empowered to threaten the lives of journalists, and even walk into a newsroom and shoot them to death. Lives are literally at stake, and some people’s horrifying response is to say there are consequences to journalists’ actions.

As unbelievably uninformed, hateful and stupid as that is, it’s a scary reality that journalists in America face. That’s in no small part because of Trump’s vitriol toward journalism. While I don’t believe Eminem intended to pile onto Trump’s “fake news” rhetoric, he unintentionally did so by vilifying writers for offering constructive criticism about his album and career.

Embed from Getty Images
Fans and Stans are allowed to have opinions, too.

It’s ironic, considering that the Rap God seems to have taken our advice. Kamikaze is not without its flaws, but it’s much better than Revival. His breakneck flow is more in sync with the production, which is decidedly rooted in rap this time around. He’s heartfelt, focused, and, of course, poison with a pen.

Shady has one of the biggest platforms in Hip Hop history, and his words are as important as ever in our turbulent political climate. Right now, we can’t take for granted that people won’t take things literally. Eminem should have made it clear his words were not an assault on the free press.

It’s time to draw another line in the sand.