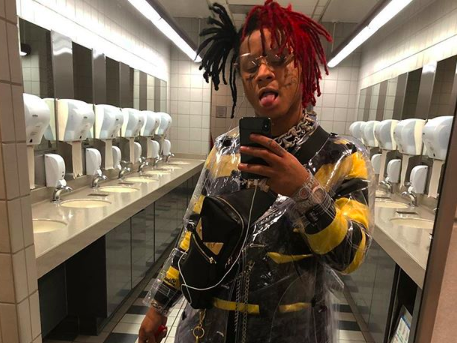 This week’s edition of Instagram Flexin’ includes Trippie Redd linking up with J. Cole and Smokepurpp spending a fortune on jewelry.

Trippie Redd has previously expressed his admiration for J. Cole on several occasions, saying, “He’s hard, regardless of what you think. He is a rapper. He gives you nothing but bars and lyrical play, which is amazing.” It appears the two have finally met in person, though it’s unclear where or for what occasion, as the photo’s location was tagged as “FAR AWAY.”

Smokepurpp Drops $1.5M On Jewelry In One Day

Purpp shared a video rocking what looks to be pounds of diamonds and gold during his trip to jewelers Avianne & Co. He can be heard asking the jeweler how much the total is, to which the man responds “$1.5 mil.”

21 went on Instagram Live to post a clip of himself playing FIFA, saying, “Any of you rappers want smoke in FIFA, we playin’ FIFA right now in the G5. We could bet whatever you want.”

Happy Birthday Fredo I Love You!

Chief Keef’s cousin and collaborator, Fredo Santana, passed away from a seizure in January. This week, Sosa commemorated his birthday with an Instagram post.

Pump shared the visuals for his “Drug Addicts” single on IG. In May, Pump said he wanted Charlie Sheen in the video, a feat which he has evidently pulled off.

Cardi B. Complains About Raccoons In New York

Anyways go check out WHO WANT THE SMOKE !!! …

Cardi, who just declared herself the “king of New York” in a verse, addresses the raccoon “epidemic” in her city, hilariously theorizing that the government is placing rabies-infested animals in their communities.

Swizz Beatz Has A Message For Timbaland

In a since-deleted video, Swizz called out Timbaland and repeatedly played a Lil Wayne track featuring the lyrics of “Pistol on my side/ you don’t wanna hear that thang talk.” The caption also promoted his forthcoming Poison album.