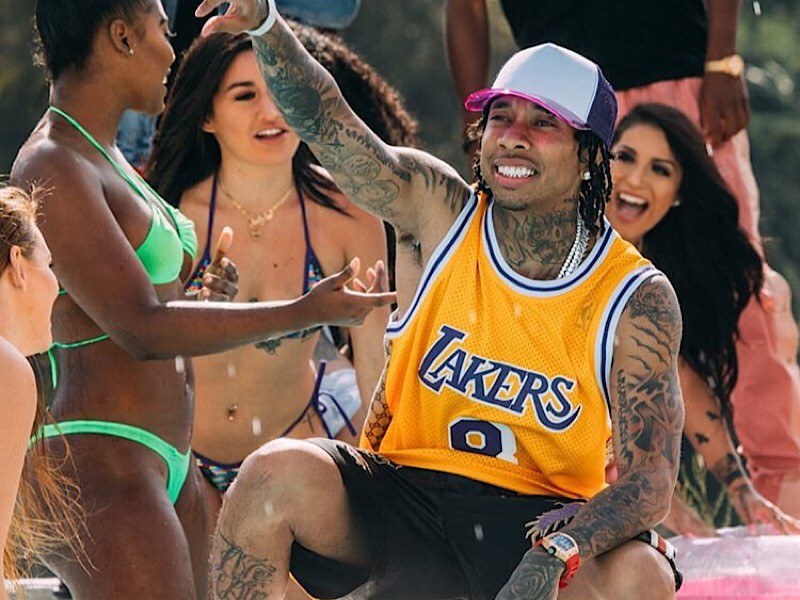 Kanye West has an unquestionable taste for fine art, and an ear for music that has allowed both his name and the word genius to intermingle in the same breath. But that doesn’t mean he’s incapable of backing the wrong conceptual horse.

He might have raised the nation’s eyebrows by storming the stage during the 2009 VMAs, but most of the surprise came from his method rather than his message — that Beyoncé’s “Single Ladies” was the best video of all time.

In hindsight, it was a pretty spectacular video.

But the same can hardly be said for Tyga’s latest video, “Taste.”

To a mere mortal, it may look like a phenomenally typical rap video but to Yeezy, it was absolutely perfect.

“This is the best video of all-time … Thank you for this perfection,” he wrote to the “Rack City” rapper via email (which Tyga shared on IG).

The video’s views have surged to almost 10 million — some thanks to the “perfection” label being thrown around. However, it’s easy to argue Kanye’s praise is more hyperbole than fact. Aside from not even being the best Tyga video, it’s barely worthy of being hailed as one of the best videos of the week.

Here at HipHopDX, we’ve compiled a list of 10 videos from 2018 that are leaps and bounds above “Taste” for various (obvious) reasons.

Childish Gambino — “This Is America”

The fifth fastest music video to reach 100 million views — also nabbing the #1 spot on Billboard’s Hot 100 — this exciting visual begs for multiple watches, and extensive conversation. It’s equally immediate, disturbing, and fascinating. Comparing this to “Taste” is like comparing Pasión Azteca (the world’s most expensive liquor) to Tang.

Whether or not you’re comfortable with what some critics have described as “charity for likes,” it’s impossible to deny that watching the genuine reactions to Drake’s acts of kindness in this incredibly well-made visual hit square in the heart. What it lacks in obnoxious amounts of models, it makes up for in actual concept.

Bad Meets Evil reconnects for this unique visual treatment that almost plays out like a new age take on Public Enemy’s “Shut Em Down” — as opposed to a new age take on Wreckx-N-Effect’s “Rumpshaker,” sans the boat and beach scenes.

Bruno Mars and Cardi B dropped possibly the most fun video to watch in recent memory. Playing up the song’s nostalgic New Jack Swing vibe, it’s impossible for anyone over 30 not to smile while watching this video; even Cardi found a way to win over her staunchest critics. Interesting what being unique can accomplish.

“Proud” has a lot of the elements found in an ultra basic Hip Hop video (like “Taste”), with one main difference — 2 Chainz’s mother. She mouths along to the track, adding another layer to Tity Boi’s endearing nature.

Kendrick Lamar & SZA — “All the Stars”

Explaining why “All The Stars” is a better visual than “Taste” is about as necessary as attempting to explain why Black Panther was a better superhero movie than Catwoman.

Sure, this video is all types of cheesy — and much like “Taste,” it has its share of unnecessary cameos — but “Freaky Friday” is a hilariously fun watch. Unlike “Taste,” though, the cheese factor was purposely injected.

When Quavo co-directed a video, we got an incredible Soul Train themed visual treatment for Culture II’s clear standout — complete with big hair and synchronized dance moves. When Tyga co-directed a video, however, we got a less classy version of “Thong Song” with an added roller skating scene.

The juxtaposition between the strong female leads in the critically acclaimed “Nice For What” and Tyga’s co-stars in “Taste” is laughable. Surpassing 6 million in mere days is impressive, but Drizzy has 132 million and counting.

“Framed” is a macabre experience that in many ways feels like peak “shock-rap”-era Eminem. “Taste” feels like an attempt at attaining peak level 2 Live Crew or Luke Skywalker. Next.