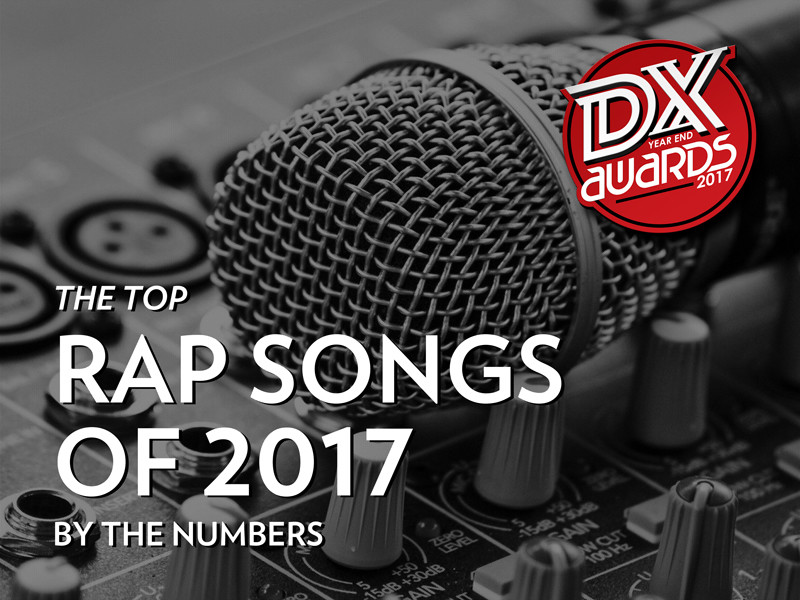 Well, 2017 was (another) one for the books. There were tons of big albums, breakout stars, hot tracks and more than enough drama. But when the smoke cleared, how did some of the year’s biggest songs pan out?

Now that we’ve named our Top Songs Of 2017, let’s look at the numbers behind some of them.

Lil Uzi Vert’s massive single “XO Tour Llif3” racked up a reported 1.3 billion audio and video streams in its first six months. According to a September report by Vulture, the TM88-produced cut generated over $4 million in streaming revenue alone, with Uzi taking home an estimated $900,000. It was also 2017’s second most-streamed song in the U.S. on Spotify, behind Kendrick Lamar’s “HUMBLE.”

King Kunta’s massive hit “HUMBLE.” had 552,970,000 pure audio streams (excluding YouTube and digital sales) making it the second most-streamed song of 2017 (behind Luis Fonsi and Daddy Yankee’s “Despacito” featuring Justin Bieber). Overall, DAMN. was the most-streamed album of the year with over 2.3 billion spins — on top of over 2 million sales.

4 Million – Sales Of “Bad And Boujee”

It was a great year for Migos. Their hit single “Bad And Boujee,” which was released in October 2016, went 4x platinum. In 2017, it had 400,500,000 audio streams, making it the seventh most-streamed song of the year. It also spent three non-consecutive weeks atop the Billboard Hot 100 this year.

Drake shattered his own record for the most songs to simultaneously be on the Billboard Hot 100 when he released his More Life playlist. All 22 songs from the project, along with guest appearances for Gucci Mane and Nicki Minaj, helped him set the new mark at 24. It was just one of many records that Drizzy set with More Life, proving his streaming dominance.

Bolstered by some philanthropic moves this year, French Montana managed to rack up 377,820,000 pure audio streams of his Swae Lee-featuring “Unforgettable,” making it the 10th most-streamed song of the year. It also landed at #15 on Billboard’s Hot 100 year-end chart and generated 567 million YouTube views on the video.

Whether or not Post Malone is truly here for Hip Hop, his undeniable hit “Rockstar” featuring 21 Savage spent eight consecutive weeks at the top of Billboard’s Hot 100 — more than any other Hip Hop artist in 2017. Also, according to Spotify, he held the third-highest total monthly listeners as an artist — behind pop stars Ed Sheeran and Camilla Cabello — at 38 million a month.

In 2018, there’s definitely a chance Cardi B could go from Grammy nominee to Grammy winner, with “Bodak Yellow” up for both Best Rap Performance and Best Rap Song at the January 28 ceremony. The Bronx firecracker’s breakout song has already won Single of the Year at the 2017 BET Hip Hop Awards and the Rhythm & Bars Award at the Soul Train Music Awards.

“We the best.” The super-extroverted DJ Khaled was the only Hip Hop act to crack the Top 5 on Spotify’s global list of the most-streamed tracks of 2017 (in any genre) with “I’m The One” featuring Quavo, Chance The Rapper and Justin Bieber. In total, Khaled had two singles — “I’m The One” and “Wild Thoughts” — that landed in the Top 20 of Billboard’s Hot 100 of 2017.

After an incredibly busy year, Quavo found himself on three songs in the Top 20 of Billboard’s year-end Hot 100 chart. “Bad and Boujee” hit #6, Post Malone’s “Congratulations” ranked at #10 and DJ Khaled’s “I’m The One” came in at #12. Between his other features and Migos’ hits, Quavo was on eight of the Top 100 tracks from the year-end chart.

Earlier this year, HipHopDX ranked some of his best features of 2017.

Check out all of DX’s Year End Awards here.