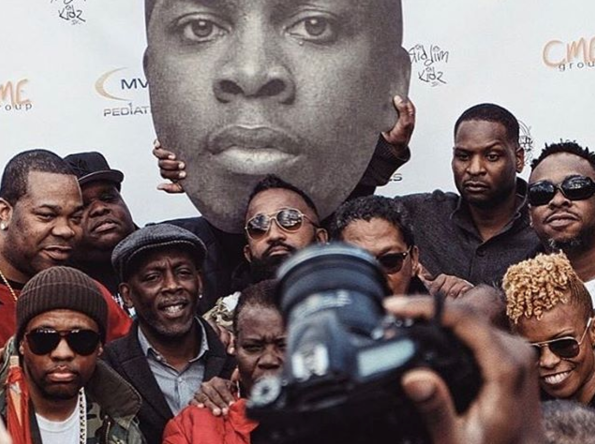 As long as this world shall exist, the ones who made an undeniable impact during their stint amongst the living shall always live in the hearts of the ones they touched on earth.

While that sentiment can be applied to countless genuine souls who have passed on, it definitely applies to the life and times of Malik Taylor, b.k.a. Phife Dawg of A Tribe Called Quest. For the thousands of individuals he knew personally during his 45 years of life, there were millions of more lives he contributed to as an entertainer and as an MC.

This past weekend served as an even bigger tribute for the late, great rhymer than the emotional outpour that flooded Twitter timelines after his death this past March. On Saturday, November 19, that Linden Boulevard immortalized on The Low End Theory’s “Check the Rhime” was officially renamed “Malik ‘Phife Dawg’ Taylor Way” to forever give those who walk, drive or view the block a taste of ATCQ’s lasting legacy.

Linden and 192. We will forever call it Malik "Phife Dawg" Taylor Way. God bless that brother. The unveiling.

Longtime DX contributor William E. Ketchum III was on hand for the festivities, which turned press, onlookers and personal friends of the Five Foot Assassin all into fans for a few communal moments.

“Felt like a celebration of Hip Hop but also a celebration specifically of that neighborhood, and rightfully so,” he recalled noting how the event was “beautiful.”

“Seeing so many people crowded around just to show love to this dude was wonderful. People from all backgrounds. Felt like a huge event and a community block party at the same time.”

Ketchum listed Busta Rhymes, Consequence, Cormega and of course, the remaining ATCQ members among the crowd, who all came to pay their respects to Phife.

WatchLOUD Managing Editor Jerry Barrow also shared a similar account, telling DX “there was definitely a party, family reunion vibe” with the only drawback he identified being the obviousness of Phife not being around to reap the benefits of his career’s impact.

Said impact includes not only being part of one of the more critically acclaimed rap albums of 2016 but also crushing it atop the Billboard 200.

Too often in Hip Hop do our heroes get honored at the time when the celebration is bittersweet but the silver lining of the “Malik ‘Phife Dawg’ Taylor Way” rollout perfectly puts into context how large the revered MC stood among his fellow rap giants.

Check out the sights and sounds from the ceremony down below.

Phife's widow Deisha Taylor with his mom Cheryl Taylor at the unveiling of his street in Queens. #ripphifedawg

#latergram @jarobiwhite getting a little emotional when literally trying to move the crowd (off the side walk) yesterday. I'm pretty sure @revolttv got a much better angle lol #atcq #ripphifedawg

Fans showing love at this renaming of a street after Phife Dawg. #RIPPhife #ATCQ #atribecalledquest #Queens

DJ J. Period spinning in front of the A Tribe Called Quest mural in Queens, shortly before the street gets renamed in Phife Dawg's honor. #RIPPhife #ATCQ #atribecalledquest #Queens