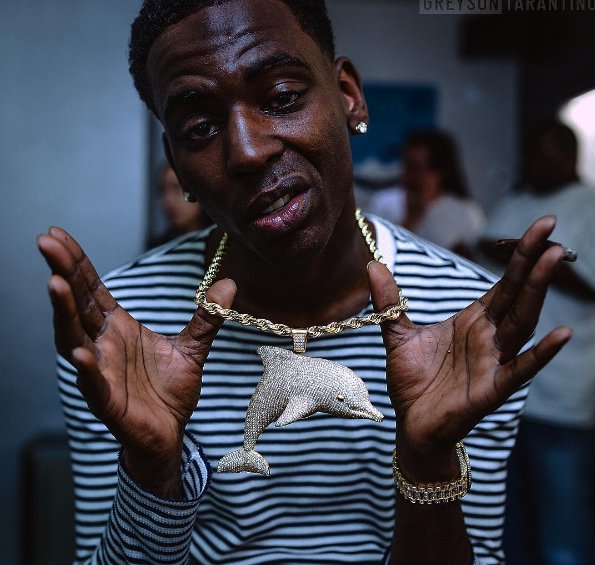 Young Dolph opens the show with baddies throwing rose petals on the floor.

Young Dolph is currently on his Royalty Tour, stopping by Los Angeles to perform at The NOVO in downtown LA. This is one of my favorite venues, and right across the Staples Center, home to the Lakers and the Clippers (go Warriors). I was actually home in the Bay Area for the weekend, and mobbed back just in time to make this show. Dolph is one of my favorite turn up rappers, and I’m well aware that most of his stuff is ignorant as hell.

Fortunately, it works for him. Self-titled the King Of Memphis, he really is about his money. I had the absolute pleasure of going backstage with my homeboy. It was actually my first time, and to be honest, I might have preferred being on the floor. There was maybe less than 10 of us off to the side of the stage, and the energy level was just so non-existent. I love crowds and I love seeing the crowds react to when the artist they love and paid money to come see hits the stage. Being backstage, I missed all of that.

The message: VIP and backstage ain’t always all that. Trust.

Special shout out to Lacy for lacing me with this special edition Young Dolph x Pink Dolphin tee. He actually held a pop-up shop on Fairfax earlier that day, and speaking of FOMO, I was really sad to miss it. Lacy is a publicist at Street Execs and someone I truly respect. It’s always dope to meet another female in the industry who is just as passionate about Hip Hop. The collab with Pink Dolphin was genius to me and she was behind it all. I met her backstage and she told me only 100 of these shirts were released. Young Dolph was rocking one on stage, but you only noticed if you saw past the incredibly shiny gold dolphin chain hanging around his neck.

Apparently, thanks to my homie who was in attendance, I missed a huge fight on the floor too. Why are people starting fights at shows? To me, that’s the ultimate level of immature. Anyways. Young Dolph did his thing. He came out behind a couple of beautiful girls who threw rose petals to the floor, like Prince Akeem with chicks throwing rose petals at his feet. My favorite songs by him include “Get Paid” and “Rich Crack Baby.” Besides his usual life mantra full of money, weed, and baddies, he also touches on the topic of Black Lives Matter in his music. Respect.

I had no idea he was so popping. Nicknaming himself “DOLPH GABANNA”, Dolph has over a million followers on IG. It’s good to see someone like that use his voice.

Reason throws his album release party at a hookah bar in LA.

I had plans to see Kubo and The Two Strings, the cartoon movie that was opening that weekend with incredible ratings. The Game actually hosted a screening with his daughter Cali at AMC Century 15 in West LA, which is my theater. How’d I know about it? My boss went. #TFTI (thanks for the invite). Anyways, I had just posted a track for Reason, which is an MC from Los Angeles. He was throwing a release party for his new project called “Proof.”

He was teaming up with another LA rapper named Cash to throw this event, and they took over a hookah bar, Nogoom Hookah, in downtown LA. I hate to bring race into the equation, but me and my friends were the only non-African Americans in attendance. It was something that we just had to address. He definitely had his entire squad out that night. It was so crowded and stuffy inside, we had to go outside for air multiple times.

The thing about L.A. rappers is, they really got their squad on their back. There was so much support for these two rappers. Definitely promising to see. It actually reminded me of a lot of rappers that never really made it or broke through, which always leaves me wondering why. Some that come to mind include Dom Kennedy and Casey Veggies. I fuck with both artists so heavy, but they never catapulted to say, the level of YG. What’s missing here?

Kap G sits down with Jen DeLeon for an exclusive interview.

I was invited to an exclusive interview and meet and greet with Kap G. Shout out to Jen Deleon for throwing a dope event. One of my best homegirls actually had a huge crush on Kap, so I had to bring her. I was originally planning on seeing JMSN at El Rey. Talk about FOMO…

It was actually a pretty chaotic evening. But no one would know from the outside. It was at downtown at the Michael Vincent Academy, which is a makeup school/studio/everything above. It was just bizarre because there were two events that night, and it was hard transitioning the set from a live band to two couches for Jen to interview.

Kap was also a little late, so that didn’t help, but it ended up being a smooth roll out. If you guys don’t know, Kap G’s most famous song is “Girlfriend,” which cracks me up every time. “I smoked a blunt with your girlfriend” is a line that I need to stop repeating. The conversation got real juicy as Kap got into talking about females and relationships. It quickly turned into a topic on side bitches and the double standards that come with it.

The fan meet-and-greet was awesome. They closed it off so less than 10 would be able to see the interview and meet Kap. He REALLY caters to his fans, which is always such a positive characteristic in an artist. They were able to ask their own questions and Kap took the time to answer each one. He closed off the night by performing outside on the patio, where there were tacos being sold as well as a mini skate park. It was lit.

That wasn’t the end of his night, though. Kap had to mob over to The Argyle in Hollywood for his club appearance. How do artists do so much in one night?

FOMO kicked in SO hard when Kanye West announced another pop-up shop for his Pablo clothing line. We tried, and we failed. I dragged my brother to Fairfax to try to finesse our way in, but there was no chance. Kids (and I mean kids) were waiting two hours to get inside those blacked out doors. Straight up the entrance was covered in black so you couldn’t see inside. There was security, too.

It’s all good,though. We ended up at a dope Kanye West mural down the street. It turns out it’s an art gallery inside, collaborating with Bape clothing. I walked in and immediately felt at home. I fuck with Bape.

The downside is, the Kanye West clothing is exclusive in store. Can’t get that on-line. Although you can get knockoffs…