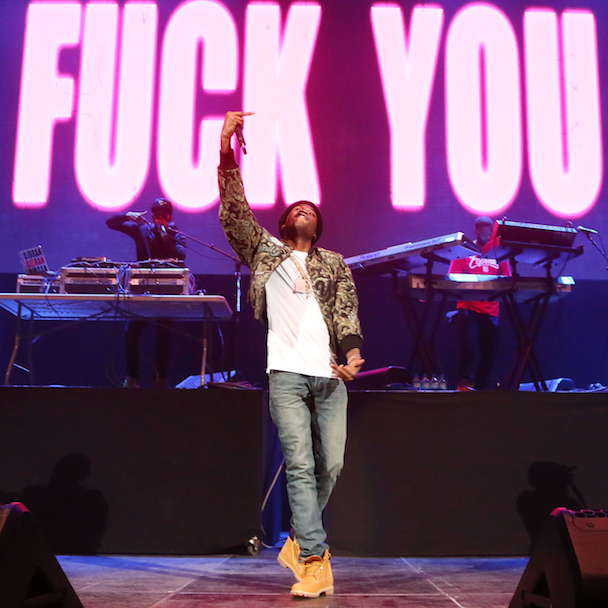 This is no longer your big brother’s rap game, where even the notion of ghostwriters being hired to assist on smash records could instantly end careers. This is not even your semi-purist uncle’s Hip Hop where artists strictly go back and forth on wax — one of the cornerstones of the genre. There’s simply no time. The Internet moves way too fast and everyone is trying to beat everyone to the punch. Back in July, Maybach Music rapper Meek Mill took issue with October’s Very Own general Drake, lamenting on social media, saying that the Toronto MC wasn’t helping promote his Dreams Worth More Than Money LP — which he collaborated on. Then Meek committed the ultimate coup-de-grace, or, at least, that’s what he was hoping it was — by revealing online that Drizzy had a little help writing his guest verse on the album for the track “R.I.C.O.” He even went as far as to out the young artist that was collecting the check: Quentin Miller, an Atlanta rapper, well-known in circles as one-half of the WDING CRSHRS. As Drake sat mum, the sometimes-suffocating world of hip-hop judgment swirled around him and everything OVO.

The conversation was: Are we mad that Drake may have had a ghostwriter? Is it acceptable that said writer also “helped” on the rapper’s If You’re Reading This It’s Too Late? The murmurs about Meek Mill’s petulant execution floated, but they weren’t louder than the queries about Miller’s songwriting credits. There wasn’t a word from Drizzy for three days until he dropped the modest diss track “Charged Up.” Meek grew, even more, determined, revealing that he had access to reference tracks in order to prove his point. Here’s where things get interesting: The “beef” began on July 22 by way of Meek’s tweets, “Charged Up” arrived on the 25th (complete with complimentary tee shirts all over Instagram). On the 30th, Meek leaked the Miller reference tracks and before those could even breathe online, Drake—of all people—took Hip Hop beef back to wax, so to speak, in the middle of the night, dropping “Back to Back.” Fatality. On July 31st, Drizzy addressed what is perceived as a growing issue in hip-hop even as he threw his gauntlet down in front of Meek Mill, whose calling card, ironically enough, was a knack for spitting ruthless battle raps on Philadelphia street corners. It was only half a bar, but it was the shot heard around the world: “Trigger fingers turn to Twitter fingers…”

“The way I see it,” says Brian “B Dot” Miller of Rap Radar, “Is that you shouldn’t make private affairs public. Unless you want a public response.”

“I think it’s gonna get worse,” Miller continues. “I think that the more technology evolves and the middleman is cut out, the more artists are gonna react and express themselves on these platforms. Look at Jeremih, he’s throwing his record label under the bus because he can do that on his phone. His own Twitter account.”

The Drake/Meek situation is only one example, but, of course, there are quite a few emcee’s known to beef online or air out their grievances through a keyboard. Wale has found himself in quite a few back and forth online: from his tiffs with his labelmate Meek to everyday detractors. Sometimes it isn’t even an actual war of words, but simply exercising their right to overshare.

It was only last week when news broke that Kendrick Lamar’s To Pimp a Butterfly received 11 Grammy nods and Wale took to Twitter. “New black soul unless ur Wale then it’s too many instruments and hard to understand.” A fan then asked about the two potentially working together and the DC rapper responded curtly, “Ain’t answered that phone since the last nomination. I get the Demi Lavato treatment from him now. It’s hard out here.”

Within the five years that Twitter has been booming, ten since being founded, it’s gotten the fans closer to the artists. Sometimes, too close for comfort but closer still. There’s a sect of Hip Hop fans from a different era that don’t want to be that damn close. “[Social media] humanizes the artist,” B Dot explains. “To me, rappers are like superheroes and I would hate to know that Superman is really Clark Kent. I would hate to see Jay Z spas out about his problems on his Twitter account. It’s just corny.”

“I feel like it’s beneath you,” he adds. “I don’t like it, but I get that it’s in the moment. It’s entertaining but nah, I just want my artists to feel like they’re above the fray when it comes to things like that.”

Back in the mid-1990s, Kawan ‘KP’ Prather was building his record executive career in Atlanta at LaFace, working closely with artists like Toni Braxton, OutKast and Goodie Mob. These days, he’s pushing the younger generation along and his newest artist Kap G is Mexican-American, from Prather’s College Park hometown and plugged in, working on music with people like Pharrell, one of KP’s best friends. Prather is the guy everyone in Southern Hip Hop knows. Or knows about. Or knows they need to get next to. But long before all of this, he was an artist in Dungeon Family’s P.A. and from an artist’s perspective, Prather thinks online beefs leave much to be desired. “Prior to social media,” he says. “If you ‘felt a way’ about another artist, you first gave yourself a minute to understand your feeling and then you contacted the artist that you ‘felt a way’ about.”

“And if the feeling persisted,” he continued. “You then put it on a record and let your art reflect said feeling. Or you got over it and went back to making your art.”

“I tell artists I work with the same thing that I tell my kids, who I care about more than anything,” he reveals. “‘Think before you post. Social media is for the world. So keep personal feelings/comments/thoughts personal, or contact the person that you want to know these feelings/comments/thoughts and tell that person.’” Sound advice but how realistic is it when the temptation to post a seething remark is at your fingertips.

B Dot adds to the sentiment: “I think any artist is capable of jumping online and reacting, again, what technology has done is empower the artist, so it’s no different than when the LOX stands out against Diddy or Ja Rule got on with DMX. It’s just that the platform was radio. That’s all we had.”

“But now there are so many platforms that the artists feel empowered. They don’t have to call up the local DJ to throw someone under the bus or express themselves. The power is in their hands with their phones. It’s just a new day man. Think about it: when was the last time you heard someone go on the radio and air somebody out? It doesn’t happen anymore. Now it’s only on Instagram or Twitter.”

KP agrees, to an extent. “The Internet can’t make things appear in your personality that weren’t already there,” he insists. “But it does give hypersensitive people too much exposure of those ‘in-the-moment’ thoughts. The problem with social media is that the moment often passes, but the thought remains for the entire world to reference. Forever.”

“Technology has enabled everybody. It’s leveled the playing field,” B Dot adds.

There’s something to be said about so much having changed in less than a decade. Scary, even. So you can imagine that it’s near science-fiction, thinking of whether or not this sort of loose public behavior would fly during Hip Hop’s Golden Era in the mid-1990s. Would Biggie be on Twitter beefing? Would ‘Pac? Is it fair to hold today’s rappers up against iconic figures who’ve been dead and gone for a couple decades now?

“I would like to believe that the ‘code’ would not have allowed artists to air their emotions out online,” Prather says firmly.

“Not without a beat playing under it,” he adds. “But I’ve seen people that I truly respected, and expected more from be very anti-’code’ in the wake of social media.”

Where’s the line these days? Is there even one? Or are we, as B Dot says, the old heads “shaking our canes” at the neighborhood kids?

“It’s hard to tell,” B Dot shares. “That particular beef [between Meek and Drake] is really representative of how the game is shaped and that social media has taken on a life of its own. Back in the day, I think it would’ve been solely on wax because that’s all we had. We had mixtapes, but the platform was limited. Either those or radio, so I think it would’ve played out differently back in the day.”

Still, even with music fans thirsty for the drama to be played out within hours on the Internet, this recent issue between Drake and Meek Mill has spawned copious think pieces and the like, pondering whether or not it’s good for hip-hop. The irony, again, is that a battle rapper taunted a hitmaker for hiring help, an action typically considered deplorable in Hip Hop. But what about the protocol he took? Is that Hip Hop now? Needling your adversary online?

“For the fans I guess, it’s a great thing,” B Dot explains. “But it’s instantaneous, the reaction. But a part of me also likes the way it used to be because an artist would express themselves and we’d have to wait to get a reaction.”

“It made things a little more anticipated because we didn’t know how a person was gonna react. So if a person said something in a magazine, we had to wait a month and a half or so until the next issue came out to get a reaction.”

Meek is an immense talent. Always has been. He’s a refreshing throwback to what made many love the art in the first place. His intensity and wordplay are reminiscent of what artists did back in the day — especially back in the Golden Era — but that’s just it. Meek was inspired by the older cats, but he is a product of this generation. He’s a rapper with access. He made the ultimate mistake by picking a fight he didn’t prepare for, online, in front of everyone — because the platform was there. And now that “finish him” track is nominated for a Grammy. If “Back to Back” actually wins, it’d be like twisting the knife. Here’s the thing: none of us can go back in time. Social media is, apparently, here to stay but if rappers are going to go that route, a strategy is key. Meek should’ve — and could’ve — been ready.

“Absolutely,” B Dot states. “Because at the end of the day, tweets are tweets. Comments are comments, but music is the cornerstone of this shit. I think you should react pretty swiftly.

When Nas hit with “Ether,” Jay came back with “Super Ugly” pretty fast. Considering the day and age, we were in at a time. You gotta back your shit up and tracks are what do that.”