The Most Important Producers Of 2012 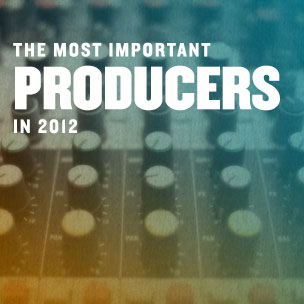 Year in and year out it becomes ever so clear why producers should garner as much recognition as their lyrical counterparts. Would “They Reminisce Over You (T.R.O.Y.)” be as heralded as it is without Pete Rock’s soulful backdrop? Would Snoop Dogg’s “Who Am I? (What’s My Name?)” turn the party out as hard if Dr. Dre’s signature G-funk drums were missing? History has shown time and time again the significance of the contributions being made by the ones behind the board, and 2012 was no different.

Not only did the usual suspects deliver some of the best records of their careers, newer talents likewise staked their claim for respect and admiration amongst their peers. In that respect, it was difficult to pick just five individuals as the entry pool was ripe with certifiable beat makers who made this year what it was. With that said, these are the five producers we feel pushed the envelope in 2012. Some are older, some are younger. Some cater more toward a mainstream appeal, while others are deep in the underground scene. And yet, what they all have in common is a mutual passion for their craft. Furthermore, they know how to elevate an emcee’s game without compromising their own abilities. These, simply put, are the best producers of 2012.

Just like our favorite emcees, what we expect from our most prized producers is quality control and consistency. However, to describe what Alchemist did this year in that way would be a vast understatement. It seemed like every month the veteran producer was releasing a new project, and rarely were his listeners let down by his execution. His contributions to the collaborative Vodka & Ayahuasca with fellow producer-rapper Oh No were cryptically enthralling, Russian Roulette was a seminal piece of impassioned art, and his joint effort with Action Bronson on Rare Chandeliers was the icing on the proverbially cake. With the amount of work that he put in this year, there would subsequently be too many highlights to name here. Without a doubt, 2012 was the year of Alchemist.

While he’s been producing for quite some time, Harry Fraud’s presence within Hip Hop didn’t fully emerge until last year when he laid down the backdrop to French Montana’s New York-centric club record “Shot Caller.” Ever since then, the Brooklyn-native has been on a roll, collaborating on full-length projects with the likes of Curren$y (Cigarette Boats) and Smoke DZA (Rugby Thompson), as well as continuing his musical relationship with Montana. His standout cuts for this year included “Kenny Powers,” “Ashtray,” “Bird On A Wire” and “The Zenith,” which matched him up alongside Maybach Music Group. With plans of an Action Bronson project (Saab Stories) just on the horizon, there’s no doubt that Harry Fraud will continue his success into 2013.

Mike WiLL Made It

If the club (gentleman’s included) is somewhere you frequent, chances are Mike WiLL Made It and his layered beats were the soundtrack for the night. In fact, the Atlanta-bred producer seemed to be featured everywhere this year, and his versatility likewise knew no bounds. “No Lie” had the males scheming, “Bandz A Make Her Dance” had the ladies doing exactly what the title declares and “Turn On The Lights” and its infectiously sensual beat had us doing the two step, even if Future did all he could to bury the record vocally. Club joints aside, where Mike WiLL Made It found his biggest strides were on album cuts that didn’t get the radio treatment. Built over a hazy melody and throbbing drums, ScHoolBoy Q’s “My Hatin’ Joint” was a slice of Hip Hop success while “Just a Sign” fittingly brought out a lyrically-introspective B.o.B. on Strange Clouds. When you hear Mike WiLL’s tagline next year, rest assured what’s coming is heat.

You could say 2012 was a resurgence of sorts for El-P. Seemingly languishing away as business concerns with Definitive Jux took up the majority of his time the last few years, El-P surprisingly made his return on R.A.P. Music, a collaborative album that paired him with veteran Atlanta emcee Killer Mike. While Mike received countless praise for his top-notch lyricism and execution, El-P was just as good on the production side, serving up records like “Reagan” and “Southern Fried” that showcased his knack for visceral craftsmanship. Not more than a week later he released his fourth album Cancer 4 Cure, which further solidified his presence that few could match. Even if El-P isn’t as productive in 2013 as he was this year, his latest efforts will most certainly not go unrecognized.

Hit-Boy has quickly become a go-to producer for many within the industry, and with good reason considering his 2012 achievements. One of G.O.O.D. Music’s in-house beat makers, the 25-year-old provided his crew with the posse cut “Clique” as well as Kanye West’s 2012 magnum opus “Cold.” The heat didn’t stop there, as work with A$AP Rocky (“Goldie”), Kendrick Lamar (“Backseat Freestyle”) and Nicki Minaj (“I Am Your Leader”) heeded impressive results. While his own debut, HITstory, was subpar on the lyrical side, he still came through with an onslaught of fresh cuts (“Old School Caddy,” “Fan”) that gave the project much-needed depth. He even blended an urban vibe with Pop sensibility on “Right Here,” stretching out his comfort zone for a record that could be enjoyed regardless of your take on Justin Bieber.

RELATED: The Most Important Rookies Of 2012