Due to tracks like “Stank In My Blunt” and his “360” collaboration with Meek Mill, Kid Ink is enjoying increased visibility in 2012. The fact that Ink has been on the scene since 2008 means he’s far from a newcomer and closer to a symbol for what being persistent brings. The emcee/producer takes the weight of the West Coast in stride along with a new heavy roster of Los Angeles artists. Being tatted up from head to toe also means Kid Ink is hard to miss. The combination of his own personal style combined with his rhyming and production give Kid Ink hope that he is here to stay in 2012 and beyond. 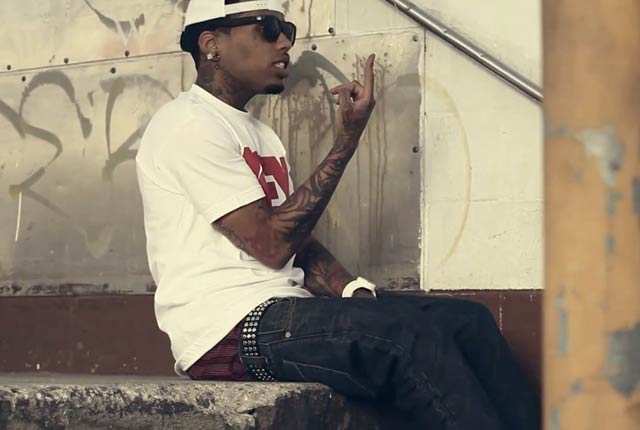 Start In Music: “Well I had my first start in Music producing around 2008 when I got my first taste in the real game working with labels and stuff like that. While producing I used to write and from there I started spitting on a lot of different beats that I had lying around.”

From The Boards To The Mic: “I got responses from people in the streets saying like ‘You look like you rap.’ After getting a lot of feedback from people it gave me the confidence to go behind the scenes and really go forward with this rapping stuff. I always had a different look from the aspect of a producer.  Being that I already had all the beats, it was just natural for me to step up to the microphone and start writing.”

Tats On The Neck: “I got my first neck tattoo and it was my fourth or fifth tattoo. In my head, I made that decision that I have to go hard with whatever I want to do. In the end, since accepting my career as music, it’s never going to be a real job.”

Making The XXL Freshman Cover: “Yeah, that was a big honor and it feels good to be on there. It really is a blessing. I would really like to get some new music with Machine Gun Kelly. I was talking to French Montana and Future too. That was hilarious when Frenchie came out with a bear on his head.”

Ni**as In Paris: “The hardest thing about touring is the rest factor. It is definitely tiring, but the fans liven you up. That really is the only thing. I love being on the road, traveling and seeing places.  Paris was the coolest place that I have been so far. That was all my show with a local DJ opener. It sold out. I feel like now with the Internet it is a lot easier to get responses. I can go on Twitter and talk to people directly across the world. The kids are really in control and the new generation is all on the computer.”

Turning Point: “The biggest turning point in my career was when I hit New York. There was a lot of pressure behind the show, because people were telling me how tough it is there. That along with radio not really playing my music—I was pretty nervous but the show was amazing. It was real to me then.”

International Appeal: “It’s hard to say what exactly you need to do. You really need that visual of yourself.  With stuff like YouTube it makes it easier to have a record on the Internet.”

When You Want Other Musicians On Your Projects: “More of my underground projects I produced the whole thing. However, I realized that once I bring other producers in the mix, they help you think of things you may not think of on your own.”

The Balancing Act: “I think it’s just a change of the times. Hip Hop has definitely crossed over and mixed with the Pop world. There is a still a really big underground, conscious Hip Hop world though. They are bringing back the old school samples and stuff. My goal is to kind of help balance that and appeal to everyone.”

Up And Away: “I want to release my independent album in June called ‘Up And Away.’ I am going to be doing mainly in-house production on that, but we will be getting some other producers on there too.”