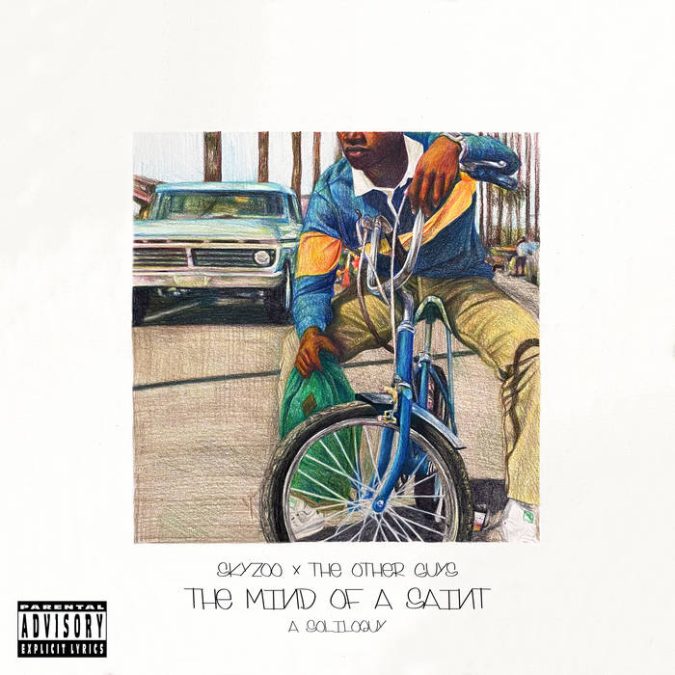 Fully thematic albums can be a mixed bag. If an artist’s concept is too complicated or obscure, listeners will lose interest. Conversely, if it’s too loose, artists open themselves up to criticism for poor execution.

Brooklyn MC and ATL restaurant owner Skyzoo’s latest release, The Mind Of A Saint: A Soliloquy by Skyzoo, is a master class in pulling off a conceptual album without breaking character or losing steam (no easy feat).

The album is told from the point of view of drug kingpin Franklin Saint, a character in Snowfall, a drama co-created by the late John Singleton, set in 1980s Los Angeles at the start of the crack cocaine epidemic. Throughout the 10-song affair, Skyzoo’s penchant for crafting lyrically rich, rewind-worthy Hip Hop loaded with easter eggs shines as brightly as ever, with an almost mind-boggling level of attention to detail.

Whether it’s telling the engineer that he’s not used to the studio as he’s from a “different life” on the song “100 to One” or describing Franklin telling his friend Leon about working on an album on the intro to “Brick by Brick” (“Yo Saint, I know you’re going to get all poetic”), he fully commits to his character.

He even carries this over to the video for “Straight Drop,” never once showing his full face, further hammering home that while you’re tuned into Skyzoo, you’re listening to “Franklin.”

Even though the production is modern, a lot of work was put into subtly making it clear that the album is set in the 1980s. An example of this is in “The Balancing Act,” where he describes the beat as having a “Fox Body Mustang aura,” referencing a car model that was especially popular during that era.

While the LP does have spoilers (for those who haven’t seen the show) and direct references to the actual plotline (“Bodies,” for example, reveals a laundry list of deaths from Manboy to Andre with thoughtful retrospect), the project is not a straight narrative. Instead, Sky takes the liberty to explore ideas that didn’t necessarily happen in the show but are plausible—again, under the guise that he isn’t Skyzoo making an album about Snowfall, but Franklin, working on an album in the mid-eighties.

For example, “Panthers & Powder.” Even though we know that Franklin’s father was a member of the Black Panthers, Sky digs deep to find out why a child who grew up with those values would go in a completely different direction.

Then there’s “Apologies In Order,” where Franklin bares his soul in a retrospective of his relationship with his off-and-on girlfriend Melody—who [*spoiler alert*] attempted to kill him after learning he killed her father, André.

But, the project’s most poignant moment comes on “Purity,” when he describes, among other things, a heartfelt encounter with Dawit Asghedom, the father of Nipsey Hussle, on the corner of Crenshaw and Slauson. It’s interesting because it brings Franklin into our world and gives us another exact time marker, as he notes that Nipsey was a one-year-old, dating this encounter to 1986.

Produced entirely by The Other Guys, it doesn’t make any sonic pivots; in fact, there is some familiarity, like “The Balancing Act,” which samples Carol Douglas’ “We Do It” (also notably sampled for Nas’ “Remember The Times“). However, it’s exceptionally well executed. There may not be any giant leaps, but there aren’t any lulls either.

The Mind Of A Saint is, at its core, a coke rap album that doesn’t rely on the common ground of celebrating the benefits of a street lifestyle. Instead, Skyzoo’s character tells the other side of the story, using the freedom that comes from being able to create without being limited by personal experience.

Ultimately, what makes this album so great is its accessibility. If you’re familiar with the show, its perspective will melt your mind. If you’ve never seen it, the fact that the crux isn’t thrown in your face means you can listen to the album as it is and love it all the same.

Season 6 of Snowfall starts on February 22, so if this album makes you want to watch the show, it’s the perfect time to have a marathon of the first five seasons. And, for longtime fans of Skyzoo’s pen game, it’s yet another opportunity to proclaim that he doesn’t miss.

If y’all not talking about @skyzoo‘s The Mind of a Saint at the end of the year, you ain’t listening.

The dude @skyzoo has done it again with The Mind of a Saint.
Second pass through now. I’ve watched every season of Snowfall at least three times each and this dude missed NOTHING.