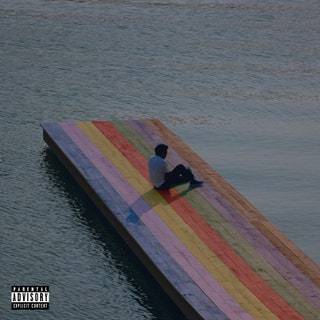 Baby Keem feels like an artist who we’re all supposed to like. The Las Vegas rapper’s rise to fame felt overnight, even if he had been releasing short EPs and singles prior to his breakout song “ORANGE SODA.”

Keem has all the qualities to become a star. He drops quotables at a rapid pace, he’s a gifted producer, his lines are quirky and memorable as is his squeaky and enigmatic vocal delivery. But above all, no Keem song sounds the same. A track like 2019’s “HONEST” has no sonic correlation with 2020’s “no sense,” which shows a desire for versatility and constant growth. His career should only be helped further by his ties to cousin Kendrick Lamar.

But Keem seems like an artist we are expected to accept is a rap star rather than waiting for him to prove it.

His debut album, The Melodic Blue, is Keem’s attempt to silence that doubt, a showcase of his full arsenal as a rapper and proof he’s here to stay. On the surface, the album accomplishes this goal but also shows Keem doesn’t always paint masterpieces when given a larger canvas.

To Keem’s credit, his ambition for The Melodic Blue is palpable. He isn’t afraid to take risks with his production and lyrics, allowing the listener to get to know the person rather than the persona.

“issues” details his cyclical battle with internalizing toxic traits (due to abandonment issues stemming from his mother’s alcoholism) and mental health struggles. “I’ve been duckin’ my friends, I’ve been stuck on my ends,” he raps at the start to tease how his problems maintaining close relationships are a result of his home life, while acknowledging he’s falling down the same path of self isolation.

It’s the crux of the album, showing a new side to Baby Keem that’s only been teased previously, and dually, challenges the listener to look at his previous work in a new light.

But Keem’s immaturity conflicts with his bid for empathy after repeat listens. He shows his age on the song “pink panties,” worrying about his latest hookup getting with ballplayers in the past — a sentiment that shows his lack of world experience.

It wouldn’t be a talking point though if Keem would express his misogynistic tendencies without trying to explain them or showed even a small glimpse of not being self-serious like numerous other toxic rappers and rap songs have in the past. Instead of just allowing his thoughts to sit in the open, he tries to justify them: “Bitches is my scapegoat, who I made this tape for?” he says on “scapegoats,” as if that excuses his vitriol for the opposite sex.

The shimmering song “16,” which sounds like it was plucked straight out of Yachty’s Summer Songs mixtapes, is one of the few times he has a moment of self-reflection, which could be interpreted as growth, though using a baby voice to say he’s “sawwy” feels too on the nose.

But Keem’s life philosophies aren’t what’s holding The Melodic Blue back: it’s the songs and ideas. He retreads his two-phone schtick on every other song (which really isn’t that impressive since Kevin Gates has two phones and six jobs, and Dee Watkins has three phones), a minor complaint on the surface but dig a bit deeper and it becomes a trend for Keem to recycle lines, concepts and rely too heavily on his unconventional delivery, producing rough drafts rather than finished products.

The middling track “booman” is one of the worst offenders, clinging to Keem’s ability to make simple phrases catchy (“I’m sexy and blessed”) instead of forming a full song to keep people’s attention. “scapegoats” is basically a Jaden Smith song: from the random beat switches to the melodramatic spoken-word faux deep interlude and Keem cramming personal details in a place where they don’t flow. Both “south africa” and “lost souls” have elements of becoming good songs but don’t capitalize on their potential. Much of The Melodic Blue sounds like it could’ve used a few more minutes in the air fryer.

His most realized work is actually the already released singles with Kendrick Lamar. Both “family ties” and “range brothers” may have polarized the masses (which is the point), but they’re by far the most complex, ambitious and fully put together songs on the album. Keem proves his staying power by doing something most rappers have failed to do: not get completely outclassed by Kendrick Lamar.

While The Melodic Blue may act as a blueprint as to how Keem can become a star, it doesn’t put him in that class. It’s a standard debut album, with plenty of flaws and high moments that flash greater potential but not much else.

On Twitter, Keem said his art was “99.9% feeling and .1% technicality,” which rings true, but sometimes the blessing can also be the curse. The Melodic Blue reveals Keem’s strengths and shortcomings, showing he still has plenty of work to do to meet the lofty expectations put upon him — fair or not.

Forcing baby keem on us is working I’m sad to say, top of the morning