Review: IDK’s Existentially Curious “Is He Real?” Shines Through Storytelling 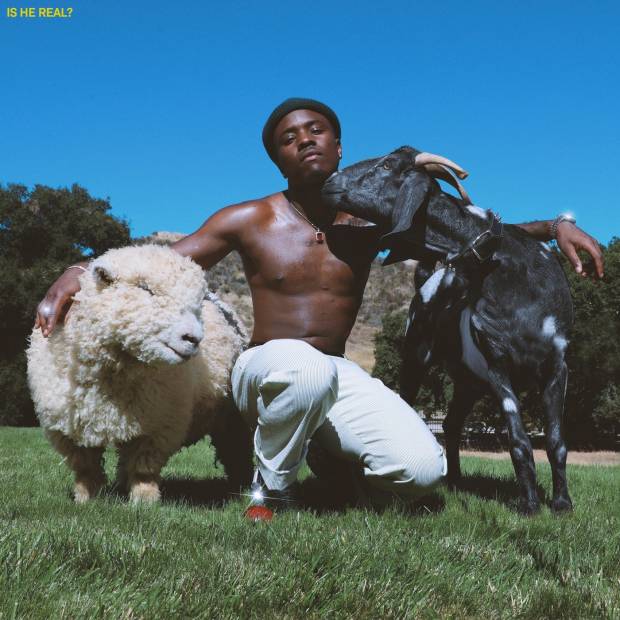 IDK refuses to be ignored. The Prince George’s County-raised rapper has a reputation for making sure audiences notice him. From his hard-working opening sets on Isaiah Rashad’s “The Lil Sunny’s Tour” to his controversial XXL-bashing independent freestyle, the artist formerly known as Jay IDK takes any opportunity possible to generate buzz. His promotion prowess is closely matched by his writing creativity shown on mixtapes like Sub Trap and IWASVERYBAD.

With his major-label debut album, Is He Real? the 27-year-old takes on a new challenge with a spiritual-dense record centered around religion and an assortment of other topics.
The first half of the project consists of catchy bangers detailing the sinful lifestyle and giving evidence to the conflict of faith. IDK poses a simple question: How can religion be real when daily life consists of gang violence, theft, and constant sinful acts? It’s a query the DC-Area rapper doesn’t have a resolve for, a recurring theme on this record.

While IDK’s flow is impeccable on tracks like “42 Hundred Choices” and “Alone,” his accompanying hooks hold each offering back, a trend throughout the release.

“24” features hard-hitting piano keys reminiscent of Kendrick Lamar’s “HUMBLE” and the late Jimmy Wopo’s “Elm Street,” as IDK shows off his technical skill switching flows seamlessly rapping about the evil that comes from money. Unfortunately, the track again suffers from a weak hook that comes off almost intentionally annoying. “Porno” serves as a top highlight of the album, a track relishing in excess where IDK spits sexualized bars backed by speaker shattering bass and heavy snares. Pusha T comes by to drop off a short, but solid feature consisting of luxury-focused bars. J.I.D. also appears near the end with a criminally-short appearance that gets overshadowed by the clashing production. Still, this track’s sonic creativity propels it to one of the best on the project.

The album takes a break from any mention of religion, sin or existentialism on “December” featuring a laid-back dance groove and warm vibe providing a brilliant standalone on the project. The song samples both Chaka Demus’ and Pliers’ “Murder She Wrote” and Kool & the Gang’s “Summer Madness,” creating this pleasant fusion elevated by Afrobeats artist Burna Boy’s energetic crooning contribution.

“European Skies,” switches the vibe into a dense and existential question fest, with atmospheric and stripped-back production that would be perfect for Frank Ocean. IDK comes through showcasing his best vocal chops thus far. “No Cable” criticizes the news cycle and how people’s short attention spans cause them to move on from real-world issues. IDK’s pen game is on point tying television references and reality together with lines like, “Guess the family mattered less when I was more an Urkel/ Yeah, but now I’m Stefan’d up/ And everything I do is everything that they fond of/ It’s funny how I went from paperboy to makin’ that paper, boy.”

While the concept is ambitious, it doesn’t tie into any theme of existentialism, it serves more as a companion piece to “Digital,” an infectious trap banger coupled with an ear-worming hook and the catchiest flow of the whole project. IDK lives up to his acronym, ignorantly delivering knowledge as he details the struggles of African Americans who were once involved in criminal activities changing their life around, yet society refusing to acknowledge the redemption.

Although these tracks show an immense level of creativity, they drive home the point that we haven’t heard anything related to religion or faith since “European Skies.” Thankfully, the last two songs of the album tie the concept together with IDK channeling his inner Kanye West, delivering a mix of raw emotion and genuine venting. “Michael What TF” is a vengeful-filled breakdown with IDK rapping about his anger towards his stepfather after his mom’s death. The cutting lines support the diary delivery as he grapples with his escalating emotions.

It’s all just a build-up for the final track “Julia…,” a song reminiscent of Kanye’s “Roses” with its minimalist production and personal tale of loss surrounding the death of his mother, Julia Lynch, in 2016. IDK’s intimate inflection makes it sound like it’s just him and the listener in a room as he talks about his mom’s impact on his life and the circumstances surrounding her death, leading to a shocking revelation that would be a disservice to spoil here.

Once “Julia…” ends the album’s intention becomes clear. It’s an existential examination of faith and the existence of a higher power, while also crafting a personal account of grief and the hope that wherever his mom is, it’s a better place. IDK is not seeking answers, rather he just wants to discuss religion and purpose without the conflict that comes from it.

Is He Real? is an impressive and thoughtful addition to his adventurous catalog packed with raw emotion and the authenticity that builds huge cult fan bases. IDK has officially elevated himself to “up next” status showcasing technical skill, creative storytelling and a distinguishing sound that sets in motion something greater in the future.