Review: Kari Faux Is A Beautiful Disaster On "CRY 4 HELP" 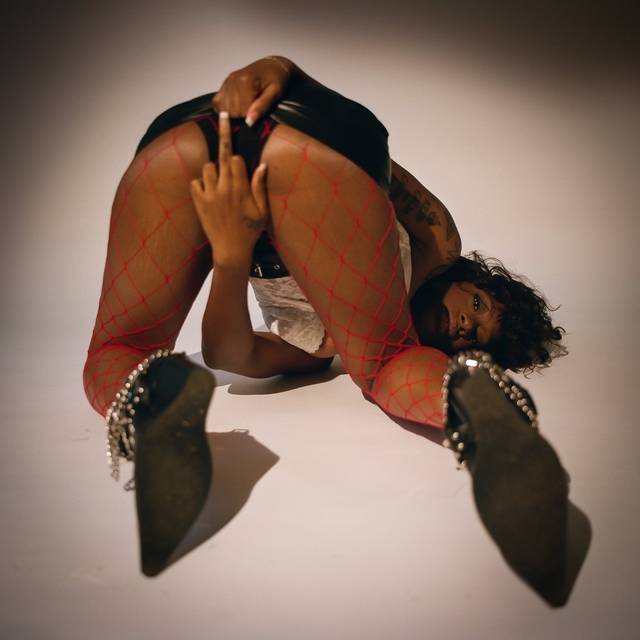 This quote by Letty Cottin Pogrebin is often repeated in feminist circles, mostly because it’s a true, nearly-Zen koan. For many centuries, women’s suffering has been used to sell everything from war to art, and “pussy pain” is the reason for Madison Avenue and the advertising industry even existing in the first place. How else, really, can they sell you products you don’t need to cure ailments you don’t have?

Of course, in the #MeToo era, women are rebelling against the notion that their pain is for profit, and it’s in this vein that Kari Faux — she of the P-Funk style of fashion and Digable Planets-style minimalist production value — decided to rap through her pain on CRY 4 HELP, her second EP. If anyone is going to profit from her pain, let it be her, and at the end of the day, why not? You go, girl.

I spoke candidly with @truelaurels about how CRY 4 HELP came to be, learning not to overextend myself and much more on @redbullradio. Catch it live today at 4pm EST. LINK IN MY U KNOW WHAT 😊

Faux (born Kari Rose Johnson) first came to underground fame with her woefully underrated mixtape, Laugh Now, Die Later, and a co-sign from one Donald Glover/Childish Gambino. CRY 4 HELP ably demonstrates that she’s more than come into her own, and that even though there are a few rough spots, she’s clearly a diamond ready to shine.

The five-track joint kicks off with “Medicated,” which is just as congested and foggy as the title suggests. The subject matter is, of course, Faux’s failed attempt at numbing the pain of her past, and she raps “Here we go again/Another high again” as though she’s lost behind a fog of Vicodin and vodka.

U KNOW THE VIBEZ*~

And this is where the die for the rest of the album is cast. This is going to be a long, dark road into — and out of — Hell, but the urgency in which Faux needs to “go there” is an unspoken undercurrent.

And oh, boy, does she really go there with “Latch Key,” the final track on the album. It’s on such a confessional in which she moves away from the previous four tracks’ sense of avoidance, and moves towards processing and accepting her trauma.

So when she raps, “The deepest parts of me are wounded/I’m mean skin to bone/I lost my V while Ashanti playing ‘I’m Foolish’/She acting out in school again/I don’t know why she do this,” we are almost there with her as she revisits the Ghost of Christmas Past. The problem is, unlike Ebenezer Scrooge, Kari Faux’s ghosts read like a social worker’s case file: adopted (and, only recently, found her rather infamous father), back-to-back relationships with ain’t-shit dudes, a pregnancy (and a miscarriage) at 15-years-old. It’s heavy, heartbreaking subject matter, and Faux’s propensity to eschew slick production and bragadoccio for minimalism and raw talent makes the delivery all the more piercing.

Aside from the obligatory guest appearance by a well-known rapper (Curren$y, who puts in an almost-unnecessary appearance on “Leave Me Alone“), CRY 4 HELP is all about showcasing Kari Faux, and all her raw pain, in its naked, yet strangely beautiful, glory. The sole unfortunate part of this EP, however, is that it concludes with a real lack of resolution. There’s no “happily ever after” on this EP — Kari Faux still has a lot of processing to do, both internally as a person and externally as a musician.

But if pain can be beautiful, Kari Faux can be its muse.