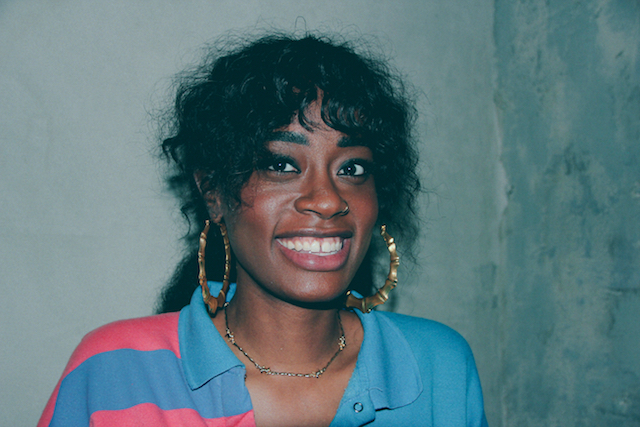 Getting into Silverlake’s Tenants of the Trees couldn’t be more difficult the night Kari Faux is slated to perform for the first time in L.A. Not only is the event sold out, but overcrowded as well. I’m already running minutes late and a handful of people are already getting turned away at the door. Being on the guest list grants me special privileges, however. The small space is thoroughly packed, but thankfully, I make it in just in time to hear Faux’s breakout singles “Gahdamn” and “No Small Talk” minus the hilarious guest verse from Childish Gambino. It’s been a year and some change since the free-spirited woman dropped the video blending both joints from her Laugh Now, Die Later mixtape. Having Gambino drop a guest verse on “No Small Talk” became the perfect launching pad after placing it on his STN MTN / Kauai mixtape. The project not only launched the self-proclaimed “rap game Daria” into the consciousness of several notable publications but gained her a loyal following. A year prior to that, she was working at Chick-Fil-A after dropping out of art school in Atlanta.

After the show, we shoot the shit about her upcoming project Lost En Los Angeles, living between Little Rock and L.A. along with her love for groovy basslines.

From Little Rock To Sold Out L.A. Performances

HipHopDX: You just did your first performance in Los Angeles to a packed crowd. What’s going through your mind at the moment?

Kari Faux: I feel great. Glad that I finally did this and a lot of people were asking me about when I would do this. I don’t think this is my first real L.A. show. This is like a listening session. It’s always a good feeling to have a packed crowd.

DX: Coming from Little Rock and catching a big break here has to be a great feeling.

Kari Faux: Coming out here was definitely a culture shock. It was a super culture shock. I was definitely kind of sad. I really felt like I didn’t fit in with anybody outside of the people I worked with or already knew. I don’t have family out here and I’m a big family person. I spend a lot of time with my family so it was kind of hard. It was crazy because I never had aspirations to live in L.A. and actually had a dream where I was living here. A few months later, you know the whole Childish Gambino thing happened. Then it was like eh, we should come down to L.A. At first, it was a scary thing being so far away from everything that I know. I did it. I live back at home now so I’m back and forth between Little Rock and L.A. I like it that way.

DX: Little Rock’s rap scene isn’t really on the radar like that eh. How exactly did you carve a lane out for yourself?

Kari Faux: It does have a scene, it’s just that nobody knows about it. There are definitely people out there who are working. I was going to school out in Atlanta and dropped out. I was back and forth between Little Rock and Atlanta a lot. I was just basically networking with people that I would meet on Twitter. I would go to AC3 and SXSW, just doing the casual thing. It’s funny because I never thought it was really going to happen. But, it’s funny because I was doing all the right things to make it happen. Then, it happened. Now, I’m at the point like damn. It’s fun.

DX: For someone from Little Rock, your music almost feels region agnostic.

Kari Faux: Really, I get that. I’ve been someone who has been into all types of music. Anything that feels good to me is all good. I’m a feelings person. I’m more emotional than technical or logical. I feel like now I’m finally getting to make the type of music that I want to make. I’m basically giving people back everything I’ve absorbed my whole life. Yeah, I’m not going to sound like a typical Southern rapper because I just didn’t listen to that type of music growing up. People always ask me what’s my earliest memory and there two things that my dad always played when we were in the car. That was classical music and Parliament Funkadelic. I love groovy basslines. Basslines are like…they drive the song for me. That’s the type of stuff I’m into. I love funky shit.

The Difference Between Living In Little Rock & L.A.

DX: Gambino hopping on “No Small Talk” was a huge look despite you guys first connecting on Twitter. What was the first face-to-face meeting like?

Kari Faux: He actually came to Little Rock. That’s why I fucked with him. Even though we were going back and forth, I was very skeptical about it. Most people would have been like, “I’m on a song with Childish Gambino, I’m about to take off.” I was more like is this right for me in this time as an artist. I believe in myself enough to ask those questions about my brand. When he came out and hung out with us, chill and smoke with us, it was tight. I was like, “Ah, he’s a real person.” He’s not some fuckin’ person that doesn’t exists in the real world.

DX: I have family in Camden, Arkansas. The fondest memories I have was smoking weed with my cousins across the street from a police station that was closed on the weekends and getting turnt in a Walmart parking lot.

Kari Faux: Camden breeds basketball players. Like for real. They got some fire basketball players, but that’s besides the point. But yo, that’s what we do. Growing up in Little Rock, you have to make your fun. When people see me they say, “Oh, you’re so carefree.” I’m like yeah because I had to make my fun. When I go places and see people standing there not enjoying themselves, I didn’t have the luxury of having events every fucking weekend to go to. We would go to a local parking lot, open the doors to all the cars, turn up the music and be outside dancing, smoking or whatever. Yeah, I just love to have fun.

DX: Has being out here in L.A. changed your recording process?

Kari Faux: It’s pretty much still the same. It’s just me being silly, coming up with a phrase and creating a song from it. I’ll hear a beat and just have fun. When I’m in Little Rock, the shit is real. It’s real as fuck. People [aren’t] living lavish. Niggas is stuck in this place. It sucks seeing people worry about paying rent and stuff. I feel like I need to stay connected to that to always stay true to myself and get caught in all of this. I fuck with L.A. because it gives me the space to be free as an artist. In Little Rock, if you’re not doing this, then we don’t fuck with you. If you not coming with them trap bangers, they don’t fuck with you. I like being out here because I can take out my cool, be a free spirit and do whatever I want.

DX: You got the album Lost En Los Angeles coming out soon. What’s the direction for that?

Kari Faux: It’s not even a conceptual album. I know people think that but it’s literally songs that I made while I was feeling completely fucking lost in the world. I was doubting myself a lot, just typical shit that we all go through that I feel no one really talks about. These are the songs that I made. It’s really like the first part of showing people I can make good songs. This isn’t the end-all-be-all. I’m not trying to make The Chronic, I’m not trying to make a classic album. This is literally about showing people what I can do. This is just my portfolio and moving forward, I want to make better music.

DX: Can you describe the insecurities you felt coming to the big city?

Kari Faux: I’m a black girl and this is L.A. Ain’t nobody checking for me in Los Angeles.

DX: I mean you got Central L.A. a.k.a. South Central or at least, Inglewood.

Kari Faux: Right, but I don’t go to Inglewood or South Central. I don’t go there. I’m in Hollywood so nobody checking for me. To not have somebody say, “Hey you really look nice today.” I’m not even talking about people trying to get at me. If I go to New York, dudes be like, “You lookin’ fly.” Then, they keep it moving. I’ve been to Compton twice to get my hair done, but I wasn’t trying to walk on the street, though. That’s the only place I get my hair done.

DX: Some people get sucked into the Hollywood life.

Kari Faux: Nope, not me. I was raised in a loving home where my mom taught me that you don’t have to do what other people want you to do just to be accepted. You are fine just the way you are. And just because I feel insecure sometimes, I’m always like no, I’m valuable and I don’t have to do what everyone else is doing just because everyone is doing it. I can see how people get sucked into it because acceptance is a real thing. I don’t want to be accepted that bad. I’m cool just chillin’ by myself.

DX: Outside of Gambino, you’ve gotten other significant shout-outs as well.

Kari Faux: Yeah Wiz Khalifa shouted me out when the “Gahdamn” video came out. Janelle Monáe shouted me out. It’s cool. I fuck with them. I really fuck with anybody doing their thing. You getting to the money and doing what you love, I’m not mad at you. And, you showing me love.