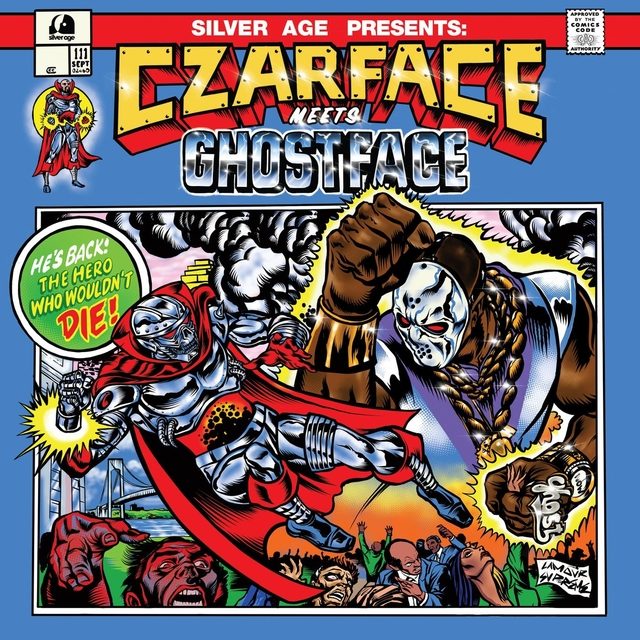 Although they all revolve around a fictitious comic book-themed superhero, some of the albums are rhyme-less, some came in hard copy comic book format and one even features the lyrical stylings of MF DOOM.

This time around though, the assumed crown jewel installment ultimately falls flat on its czarface.

One would assume that having Inspectah Deck, Esoteric and Ghostface all collaborating would bode the best verses the series has yet to see but, in reality, the punch is far from packed. 7L sets off the project with the same astute production (a crash course of black hoodie boom bap and eccentric comic book sound effects) and as the 12 songs roll through and show-stopping excitement is never delivered.

After “Back at Ringside” (an on-brand comic book intro sans rapping), “Face Off” opens the floodgates with a strong screwface-inducing, black hoodie beat courtesy of 7L and Spada4. Ghostface kicks the track off with a promising premonition: “Ayy, yo it’s CZAR vs. Ghost, we about to face off/Turn my mic up, and when the verse drop, turn the bass off/Dangerous material, spread like venereal/Got the scoop on the game like a bowl of cereal.” However, that’s as exciting as the song gets – trailing off tenacity as the three minutes come to an end.

The same monotone bars and delivery carry through to the proceeding two tracks, “Iron Claw” and “Czarrcade ’87.” It isn’t as if Ghost, Esoteric and Inspectah are dishing out nursery-rhyme level raps but the conviction in their cadence reflect that of overworked rhyme-writers reading the back pages of their composite notebooks. Ghostface brings some steam to “Power and Stuff” with a heightened intensity while rapping: “Son, I walk through the night with a cat-like vision/Precision, you get smashed like a head-on collision”. But just like many of the peaks and valleys on this album, he concludes the verse with his most cringe-worthy line in years: “Still gettin’ our burgundy and gray on/We colorful like that box of 64 crayons.”

While Ghost and Deck might not be completely in their bag on this one, 7L and Spada4 keep wildly consistent, bringing spot-on sounds that match the series’ unique superhero-themed soundtrack. Both “Super Soldier Serum” and “The King Heard Voices” have cosmic beat switches that are as seamless as they are Super-Saiyan. Not to mention Kendra Morris’ haunting chorus on the latter track that will bring shivers to listeners; that also goes for her contributions on “Morning Ritual.”

Czarface Meets Ghostface is far from a “bad” rap album despite having a seemingly uninspired rap trio. From a bar-for-bar standpoint, the rhymes on here are better than a lot of today’s modern offerings but it’s missing the menacing attitude which is often times half the battle.