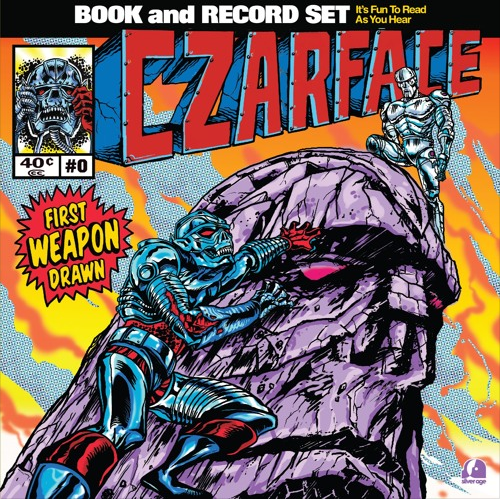 Following the thematic narrative of a rap album isn’t always the easiest task to undertake, even as an avid listener. Some of the genre’s most talented lyricists find ultimate triumph in making their albums jam-packed with both explicitly intricate storytelling and metaphorical chronicles that keeps fans digging for the music’s actual meanings, messages and musings. Now try following that same purposely blurred storyline without any lyrics to reference. Czarface’s First Weapon Drawn is exactly that; a narrative told through music but without any actual rapping.

The album is the fourth edition in the series of fictitious comic book-themed rap albums by 7L, Esoteric and Inspectah Deck (the latter two who serve as executive producers this time around) that revolve around Czarface; a superhero intended to be a true combination of the trio and their respective talents. They teamed up with Marvel Comics to create this album specifically as a soundtrack to an actual hardcopy comic of the same name. The previous three Czarface installments have featured rapping from Esoteric, Deck and other featured guests, while 7L handled most of the hardy boom-bap production. However, First Weapon Drawn is constructed simply with that evocative instrumentation. There is brief narration tacked on to the beginning and ends of a few tracks, but the album is primarily action movie background music layered with knocking Hip Hop drums.

The opening track, “Czarface Theme” sets a groovy crime fighting tone, that when paired with the comic book makes for a dramatic entrance for the story’s main character. Although audibly you don’t get a sense of the story until the following song which happens to be the title track “First Weapon Drawn.” The narrator comes across as a rap game Vin Scully and fans of comic book allure will appreciate to the ode to old-time radio broadcasts backed crescendo orchestration of audio feedback, pulsating guitar riffs and crashing drums.

Had Inspectah Deck and Esoteric laced the beats with some of their battle-tested bars like on a cinematic number such as “Godspeed Solider,” perhaps this would be comparable to their previous three. In fact, 7L’s production here is some of strongest found throughout all the releases.

While all the beats, narration and voice acting are intriguing, there really isn’t a ton of replay value — unless someone really needs background noise for their video game sessions. Having well-orchestrated, dramatically satisfying theme music for a comic book will quench the thirst of the Hip Hop head/comic book aficionado, but the majority of listeners won’t revisit this soundtrack.