Review: Lil Skies Is Cloudy With A Chance Of Greatness On "Shelby" 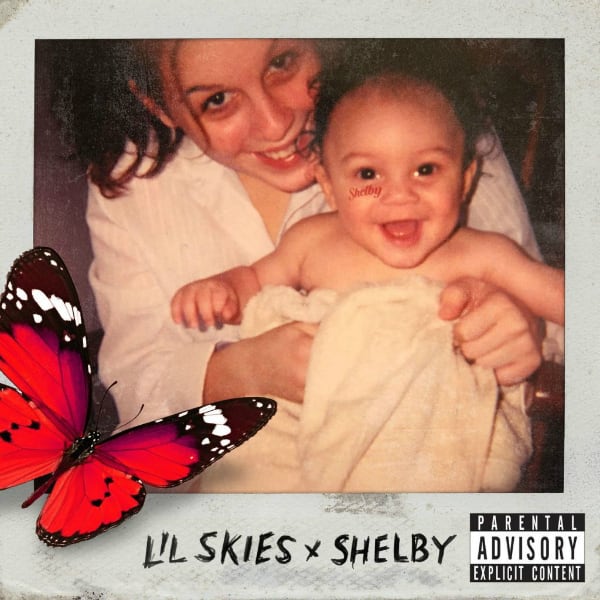 From a surface level, Lil Skies (real name: Kimetrius Foose) checks off all the 2019 rapper boxes.

As an ambitious 20-year-old from central Pennsylvania, he has the “mumble rap” calling card down pat, almost as if he’d come straight out of Central Casting to play the part: the heavy tattoos, the stage name that eschews the “gangsta” nomenclature (i.e., Capone-N-Noreaga) in favor of something more spritely, the emo-esque subject matter.

He’s far from a bad artist. To the contrary, some of his previous songs are standouts, such as “Welcome to the Rodeo” and the equally solid “I Know You” featuring Yung Pinch.

It’s just that his overall repertoire needs a bit of fine-tuning.

And that’s really the best summary of his latest album, Shelby (which is named after his dear mother). There are glimpses of a potential to be a true tour de force but falls short on occasion.

As a proper follow-up to his Life of a Dark Rose mixtape — which was flavorless and, frankly, boring — Shelby fares a lot better than its predecessor. It certainly helps that Lil Skies gets by with a little help from his friends Gucci Mane and Gunna, who trade bars with the young up-and-comer on “Bad Girls” and “Stop the Madness,” respectively. Gucci is in top form when he spits about “McLaren drivin’ reckless, Trap God, don’t miss your blessin’/Good girl, come get your lesson, Lil Skies, these bitches tellin’/I sold so many records, I know so many felons/And I see these bitches checkin’, and I see these niggas jealous,” and Gunna fires off like a machine gun with lines like “Fifteen hundred horses, oh, you can hear when I’m passin’/Nigga ain’t wanna feel me, oh, ’til I start spazzin’/Right now I need to own my charts, gotta bring that cash in/I’m not walkin’ inside your club, I need my backend.”

When left to his own devices, Lil Skies makes music that’s catchy — in the sense that it’s easy to bop your head to the beat — but, lyrically deficient. Nowhere is this more evident on “Through the Motions,” which kicks off with a “la la la, la la la” hook (c’mon man, really?) and features such mundane lyrics as “Goin’ through the motions, I’m just tryna make it through/Hard to keep in touch when I’m always on the move/You tell me that you love me, I don’t know what I would do/If you wasn’t by my side, will I be able to move?”

To be fair, the kid’s endearing response is indicative of a young man whose aspirations are being realized, and for this, he is truly thankful. With that said, even if he’s just a product of his times, he’s got to be able to carry his own musical water with so much competition out there.

There’s no doubt that Lil Skies can do it — the question remains, will he do it?