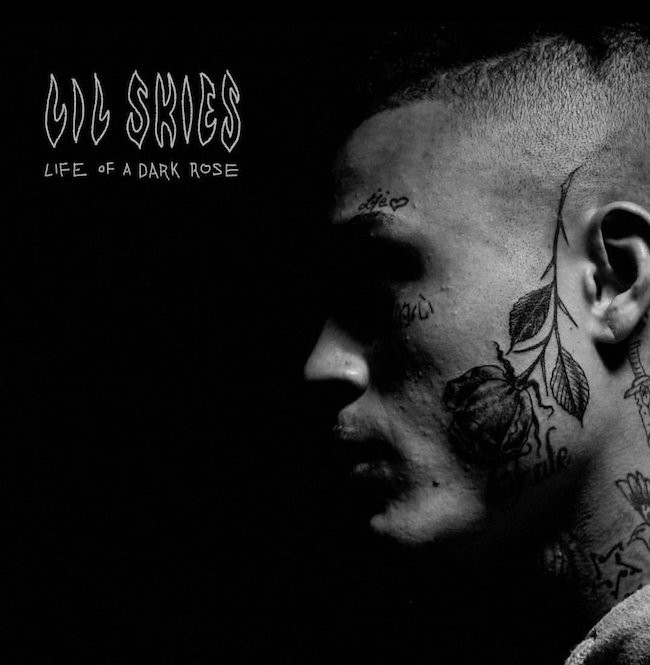 It would appear the prerequisites to be popping in 2018 are a couple of obnoxious face tats and a music video with the Lyrical Lemonade stamp of approval. The latest SoundCloud sensation to achieve said level of internet accomplishment is Lil Skies (pronounced Sk-eyes. Not sk-ees). The 19-year-old melody-driven rhymer hailing from rural Pennsylvania has managed to accumulate more than 28 million YouTube views on just two separate videos — “Red Roses” and “Nowadays” — and both Internet smash hits appear on his signature project to date, Life of a Dark Rose.

Before pressing play on the album, one would assume the aforementioned mentioned tracks would be the highlights – and indeed they are. The two hits bookend the album in attempts to disguise the fact that the middle of the project is mild at best. If anyone is revisiting the bulk of the album, it’s thanks to the producers (Maaly Raw, JGramm, Menoh Beats etc.) whose beats allow Skies to find footing with melodies and not much else. His lyrical content doesn’t leave the confines of this emo-rap notebook everyone has been taking a page from lately.

Album opener “Welcome to the Rodeo” is a cold splash of water in the face with abrasive, trunk-rattling bass and snares constructed by Taz Taylor – it’s a complete 180° from the rest of the album’s heavy reliance on silky vocals and shiny melodies that smoothly rock you back to sleep. Nonetheless, the intro allows him to get off some self-satisfied rags to riches bars like “Long nights I sold drugs just to hit the studio/Now I’m eatin’ steak and shrimp, bitch, I ain’t eatin’ sloppy joe/Look into the mirror, flex, and now a nigga in his glow.”

Deep cuts like “The Clique,” “Lettuce Sandwich” and “Boss Up” have captivating beats and moderately catchy stylings but a real lack distinct emotion. As a young rapper birthed in the current era of vibes > lyrics, the expectations for lyrical miracles are understandably low but that needs to be offset by unparalleled emotional expression. With mumble rap ballads like “XO Tour Llif3” as the golden standard for artists trying to get by on passion alone, Skies can’t seem to consistently trigger any real emotional response. He raps, “Depression settin’ in, so grab my medicine” (“Kill4u”) with the same monotonous breathe he spits “I walk in the bank, look like a walking lick” (“Big Money”).

Lil Skies shows promising signs of Life of a Dark Rose for it not to be thrown in the pile of cookie-cutter SoundCloud projects. The album has a small handful of moments that can be revisited to fulfill one’s need for catchy beats and the contemporary “ayy” flow but that’s about it. Overall, his sound is inherently more polished than most of his world wide web rap cohorts which puts him in a better position than most but his dominance in modern-day musicianship is noticeably still in its early stages.