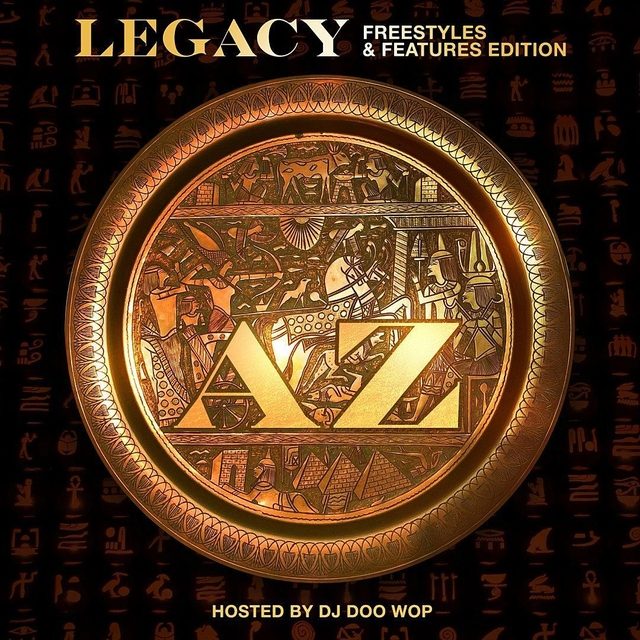 AZ has a bone to pick with his Hip Hop status. The rapper so often crowned “most underrated” was lambasted by Steve Stoute for not having enough talent during a famous “Drink Champs” podcast episode.

Anthony Cruz’s response comes in the form of Legacy: Freestyles and Features Edition. The 23-track mixtape showcases the dexterity AZ has always possessed as an MC but falls flat artistically.

There’s never been any doubt about AZ’s flow, not since his stunning verse on Nas’ “Life’s a Bitch.” He showcases the versatility of his flow, as he raps seamlessly with multiple beat changes on “Thank You.” This is Rap 101 for youngsters, and for a moment it seems as if AZ is going to make Stoute look foolish as he winks at his “haters.” His lyrical abilities remain sharp, as on “AZ Freestyle From Doo Wop Mixtape 2”: “The doer, could snatch the medulla off Medusa/Pursuer, pop off Rugers and fuck cougars.” Rhymes like these showcase why he’s developed a cult following from those who eat up punchlines.

The problem lies within a lack of substance. While AZ can raise eyebrows with his words, there are only so many times disassociated bars will connect before they lose their luster. “Oil Money,” which comes in at track 20, features enough scatterbrained rhymes to make Lil Wayne blush. “Horns and halos, fish, corn and potatoes/Perform love in the dawn, getting licked on in the Caicos,” he rhymes, and while the multisyllabic component of his bars is impressive, there’s no denying how nonsensical the rhymes are.

Length is not an issue, because most of the songs are brief and there are plenty of interludes courtesy of mixtape host DJ Doo Wop. However, this also keeps the songs from sticking, because as soon as the listener finds their groove, most of the cuts are half over. “Da Jux” remains as an outlier, as AZ and Vado trade bars about a heist over appropriately Rotten Apple production. The rest of the music follows suit, with enough soulful cries and tapping drums to satiate Papoose. The production is solid but fails to stand out amidst East Coast production we’ve heard so many times before.

AZ brings plenty of outstanding rappers along for the ride. Yet, it’s telling that the two of the strongest joints on the album – “Honest Truth” with 38 Spesh and “The Season” with Nas – are cuts on which AZ is outshone by his peers.

That’s not the way to carve a legacy or respond to criticism from a popular podcast. AZ should have taken his time to craft a dense album filled with the most positive of his attributes. Instead, we have this mixtape, which is too half-baked to be a consumable finished product.