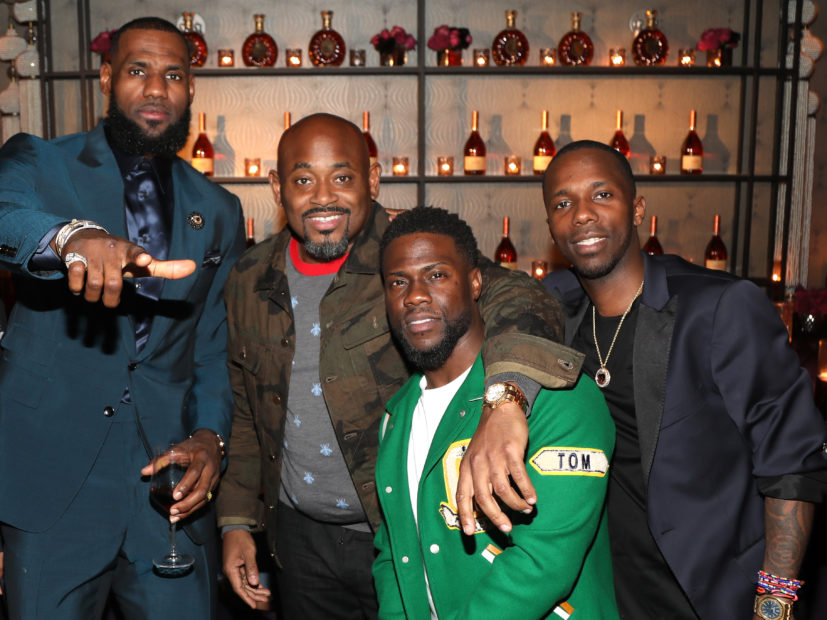 Over the course of his storied career, veteran music industry executive Steve Stoute has always positioned artists to win.

Whether it was helping JAY-Z or Nas secure the bag or expounding on edutainment for the culture as a whole, the 48-year-old mogul is always eyeing the next shift in the ever-changing landscape of Hip Hop music.

Which naturally makes his new partnership between the NBA and his distribution startup UnitedMasters a merger worth watching.

Nearly a year after its inception, Stoute recently announced that UnitedMasters artists will have access to the NBA’s social media platforms — a multi-billion-a-year impression operation. In an exclusive conversation with HipHopDX Editor-In-Chief Trent Clark, Stoute explains why a deal like this is not only the future, it’s the necessary present.

When it comes to the NBA and Hip Hop culture, the synergy has always been there and it sounds like your merger, your venture might be the full- the first actual commercial vehicle that actually bridged tops here at Hip Hop. The best of the best versus the NBA. Would you agree?

I don’t know if you remember the Allen Iverson A6 commercial back in the day. I always felt like rap and Hip Hop and basketball was one- I always seen it as one thing. And I think it was known with athletes and their appreciation for the art form, and athletes and artists and their appreciation for what both men do. To be able to represent the NBA is bringing those two worlds together.

That’s one of Jada’s best songs, period. And a few weeks ago there was an article titled “Why the NBA Has Surpassed the NFL as America’s Sport.” With that announcement and then, this campaign coming, how does it feel to be in the art of a sport that’s, I guess, considered the most powerful sport in the country?

You know, I think that the Commissioner Adam Silver has done an amazing job of leading the men just to be able to express themselves in a way that’s productive. I think that the worlds watched this along with the fact the game is expanding. And you have some of the biggest rock stars, I believe personalities, in the game. When you look at Kevin Durant, Steph Curry, LeBron James, and guys like that and the fact that the league allows these guys to be very outspoken, but they’re speaking on what they see happening in these communities. I think the combination of those two things makes it the sport that America gravitates to. Not only America, you know, it’s grown globally. It’s a sport that guys gravitate toward and people love watching.

A lot of these brand deals and synchronicity have historically been done behind closed doors. Now, you’re putting on the forefront. You’re letting people know this is what we did. You’re letting artists know, this is where to go to get- type of look. Where your song can be featured on some type of NBA campaign. What’s the angle? What’s the idea of flipping that? Putting the advertisement right there, front and center?

Artists need services. Artists being able to get their music up on these services. And finding a way to get heard. That’s what’s happening. Artists are really gravitating towards this level of independence. So being able to guide them through services I think is important. Allow them to get an opportunity to work the bridge. Allow them the opportunity to get their music played somewhere outside of, simply just, trying to get on the playlist.

So I think that, in general, giving artists more opportunities outside of simply giving them the solution is what I envision with UnitedMasters. I’ve been doing this for a while. I’ve always been about giving artists opportunities that wasn’t available. It’s really breaking down walls and opening doors, and learning the culture inside these rooms. I think it’s another aspect of my career. But I think it’s an important one that artists have.

Obviously, you have been a champion of artists your whole career. Was there like a moment back when you were on the label side when you saw someone get jerked, and you knew UnitedMasters had to exist? Was there one instance where you saw a contract, and it made your stomach turn?

No. I think that labels are trying to get artists- I think it’s getting harder and harder to sign artists. I just think that as the economics started to shift you started to see, what the relationship is really all about. And that’s when I decided it’s time for me to go.

You have been saying the NBA is ‘the new MTV’ a lot. Are you saying it’s as exciting as MTV? Back in the day, we just kept MTV just on. It was like the home button on the remote. Is that what you mean? Elaborate on that.

With MTV, what made MTV different outside of just the music. But what the music video did was, it told you how to dress, it told you what the words were, what obviously the genres all about. It was a lot of it that was outside of just the music itself. And when I look at the NBA now, you see the players, the camera, the players walking in and people pay attention to that. Oh, shit. Look at what he’s rocking, look what he’s wearing. LeBron and Kevin and those guys put their music up- like, oh shit, he’s playing Tee Grizzley, he’s doing this. And, all of a sudden, those songs take off. That’s what MTV did. It’s the same shit.

Big facts. Now, with Hip Hop being such a global phenomenon at the movie and NBA needs those high octane tracks to fuel their social media clips or whatever and instrumentals, as well- trap instrumentals… As a vet, a Hip Hop vet, would you say it’s put a damper on the quality of Hip Hop?

Do I think that ruined the quality of Hip Hop?

Yeah, if everybody’s making tracks to get put on Instagram clips, on slam dunks, or say … NASCAR. With the need for fast exciting tracks; if everybody wants Hip Hop music, it’s basis being, part of the deals now or include merch and branding and making music to fit a commercial vehicle.

I think this is a great gift. Some of the projects that you love to see and they rival some of the great years of Hip Hop. It’s all relevant. I think there’s a lot more music we gotta go through. Some of the stuff is not necessarily for you, and before there were nowhere near so much quantity, but I think as you go through it, you definitely find great music and really good writers.

And that’s sort of what I pay attention to, I don’t get caught up- I used to get caught up in that. Like, ‘Oh my God … this is the worse … the music is dead!’ This is wack. You can overreact and do that shit all day with everything. All the guys do that now with basketball- like basketball ain’t what it used to be. They call a foul with almost every contact play. The guys are playing offense but nobody plays defense. You have to accept it for what it is.

It has been a strong year. What’s your album of the year, my man?

I can tell you the best four albums this year. Obviously, this Meek Mill [Championships] album. I would say, I’d say Side A of Drake’s [Scorpion] album. Drake would not expect that. I really liked Cardi B’s [Invasion of Privacy] project, man. I thought she delivered. Oh, Pusha T [Daytona].

I think it’s omnipresent in changing people’s lives. It’s not like so much music that we need the music- like back in the day such specifically change people’s lives. There’s songs that change people’s lives, there’s always gonna be moments. I think it’s the impact, it’s a look and see, it has already happened. I mean it’s everywhere. I mean, specifically, Hip Hop is everywhere. It’s what you live and where you look, it’s everywhere. You can’t not see it. So, at some point you have to accept the fact that the moment of coverage has already taken place, it’s already reached that point of mass consumption. And now, you just have to really appreciate the songs and the projects that come out that make a significant impact. It reminds you of how you felt when you were a teenager first listening to it, or your twenties when you were going through college. You know- for us guys who have been in it for a while.

I got my break around all of it, to be honest. Right when we finished UnitedMasters, there’s always been, I’m gonna always try to put artists on. And make sure that these guys can do what they wanna do. See it like, they’re not getting jerked. If you do that, as well as book a team to do, then I think we’re gonna see an erratic change. A radical change, rather, in the way artists go to market now. And what artists expect from progress.