Review: 21 Savage Shows Tremendous Growth On "I Am > I Was" 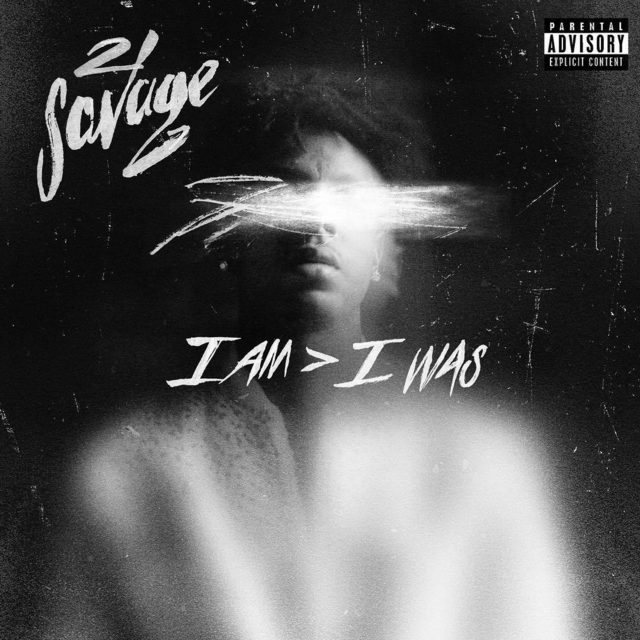 21 Savage’s maxim of “I Am Greater Than I Was” is growth, understanding that as an artist and a public figure, you must push yourself to make some changes within.

To be “game changing > clout chasing” is to actively do good in your community with your fame and success. This year, 21 Savage has lessened his creative output to focus on his philanthropy, hosting his third annual Issa Back to School Drive and announcing the 21 Savage Bank Account Campaign to teach kids about financial literacy. With multi-platinum singles (“rockstar,” “Bartier Cardi”) and a high-profile breakup with Amber Rose in his rearview, 21 Savage continued to stay true to himself and East Atlanta, resulting in his new fans to join him on his leap from street talker to motivational speaker and hitmaker.

The road to I Am > I Was was the Saint Laurent Don strategically teasing his album through ambiguous release dates and “forgetting” to drop his album on Dec. 7, but finally coming through on Dec. 21, the weekend before Christmas. I Am > I Was is a late contender for Best Rap Album of 2018 simply off 21 Savage’s evolution as an MC who sets a high bar for real street rap in the mainstream.

I Am > I Was stands as a much tighter project than Issa in terms of flow and non-skippable tracks, I Am > I Was sticks to 21 Savage’s promise of “going back gangsta.” He has refined the idea by balancing the dark and chilling aura found in his previous projects with mellower backdrops. He chooses to not list his guest features for unexpected surprises, and the A1 players are all here: J. Cole, Yung Miami of City Girls, Offset, Post Malone, Lil Baby, Gunna, ScHoolboy Q, Project Pat, Childish Gambino, and Young Nudy. 21 Savage covers familiar themes – like running in the streets, why he’s always rapping about guns, and dealing with his celebrity – and his collaborations strengthen those messages through their loose and organic chemistry.

One of those much-talked about collaborations is 21 Savage and J. Cole’s “a lot,” which is powered by DJ Dahi production and a sample of East of Underground’s “I Love You.” Cole, 33, and Savage, 26, may have an age difference, but his thoughts on the very real blessings and curses of his career is universal. Plus, Cole, who has been on a run of guest verses lately, delivers some headline-making lines on fake streams and rappers making memes, as well as empathizing for 6ix9ine’s legal situation: “Pray for Tekashi, they want him to rot/I picture him inside a cell on a cot/’Flectin’ on how he made it to the top/Wondering if it was worth it or not.”

In another major collaboration, 21 Savage and Childish Gambino reflect on the toxicity of the music industry on “monster.” Gambino has hinted retiring the moniker altogether, and his verse supports that decision with him rapping, “might pull out, the game so weak.” As for 21 Savage, it’s one of many moments of introspection, especially since he practices what he preaches. Wealth and notoriety aren’t necessarily part of 21 Savage’s agenda anymore; he recently took a vow to not wear jewelry and wants to influence the youth to invest in real estate.

I Am > I Was is 21 Savage becoming more of a man. As a teenager, he lived through poverty and violence by becoming numb to the pain. When he raps on “break the law,” “My brother lost his life and it turned me to a beast/My brother got life and it turned me to the streets/I been through the storm and it turned me to a G/But the other side was sunny, I get paid to rap on beats,” you can’t help but salute the changes he’s made in his life. On “ball w/o you,” a heartfelt track about relationships, he talks about rather having loyalty than love, and on “letter 2 my momma,” he showers his mother with praises for raising him as a single parent. It’s a constant reminder of his maturity throughout the album, leading by example through his personal experiences.

He also doesn’t take himself too seriously. Many of the tracks feature emotive lines that range from his 12-car garage obsession (“Why you got a 12-car garage? /’Cause I bought six new cars”) to threats (“The chopper can hit all of y’all/Your brother, your goldfish, and dog) to recognizing his G (“Y’all was in the house playin’ Mario/I was sellin’ weed and went hollow”). It’s what makes 21 Savage such a skilled rapper: he’s ruthless, humorous, and deceptively clever when conveying his feelings. The lyrics become instant Instagram captions and tweets, continuing to feed the 21 Savage meme craze.

What also makes I Am > I Was such a cohesive listen are the producers. Metro Boomin’ only appears twice (“break da law,” “asmr”) while Kid Hazel, DJ Dahi, Cardo, Wheezy, TM88, Louis Bell, and others give the album more depth. It’s equal parts nostalgic and on trend with hip-hop today, where Three 6 Mafia homages (“break da law,” “a&t,” “good day”), the flute fad (“can’t leave without it”), and drawn sword sound effects are all present. Each track attempts at going the distance of showing new sides of 21 Savage. Everyone plays off each other’s strength, letting 21 Savage’s deadpan delivery and singing be the stars.

I Am > I Was deserves all the recognition for 21 Savage becoming a better version of himself, and it’s a much-needed proclamation that he’s willing to work on his craft. At 15 songs and 51 minutes long, it’s an enjoyable listen with good pacing, filled with the right amount of vulnerability, heartache, menace, and savagery. A year of anticipation and mystery, 21 Savage’s sophomore album proves he’s a versatile and gifted rapper who has a lot to say.

He’ll only make a stronger impact from here.