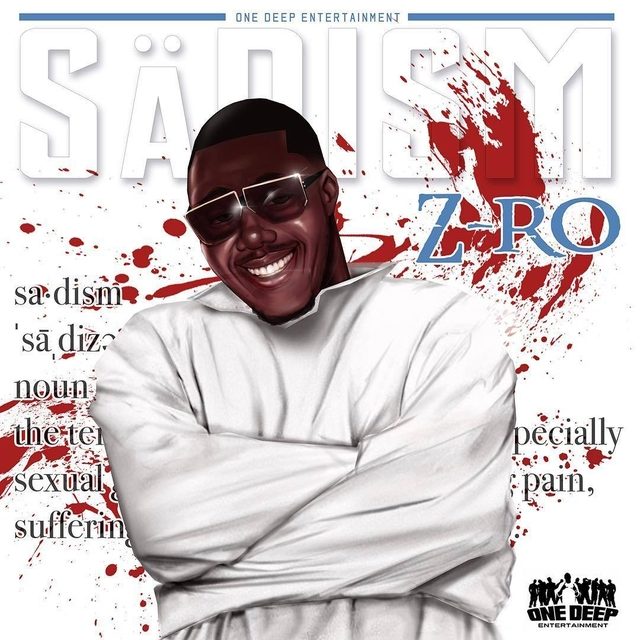 This album wasn’t even supposed to happen. Z-RO was all set to retire in 2017 before “surprising” fans with last year’s Codeine. A year later, he’s back with another album. Sadism is not without its flaws, but finds ‘Ro comfortably cruising in his own lane in a way that will delight his core fanbase.

Much of Sadism’s content is nothing new. Z-Ro armors himself against haters and fake friends, all the while bragging about his riches. These topics, while familiar, are forgivable for their redundancy for the crisp, airy way in which Z-Ro delivers them. “Hi Haters is a bouncy, breezy joint that features Z-Ro’s adept melodic chops. It’s followed by “Haters Say,” which falls into Riley Freemanesque overkill on the hater talk, but is quickly redeemed by “Not a Rapper.” The track’s haunting piano keys back threats like “So I’m a bitch on Instagram, in person though you must forgot/Make me turn into the old ‘Ro and call you bustas out.” Lines like these remind folks that Z-Ro is far from finished and add formidable muscle to Sadism.

Z-Ro keeps it all the way Houston, and the production is doper than a Barksdale Red Top. The ear-grabbing music saves cuts from eye-rolling lyricism. The bars on “Hurt You” are nothing special, as ‘Ro raps, “Homie, who the hell you talkin’ to/Slap yo ass so hard is what I’m ‘bout to do.” However, the elongated organs and the coolly distorted vibe carry the song and even make the basic-yet-catchy hook all the more memorable. Elsewhere, Z-Ro makes the most of the upbeat keys, buzzing bassline and thick drums by toasting to good vibes on “Good Guy.” The production usually saves the day amidst even Z-Ro’s most shrug-inducing sentiments.

At times, the content is so redundant even the sonics can’t save it. ‘Ro’s friends really have him pissed off, and he spends a sizable chunk of the album decrying their disloyal deeds. “Do For These” finds Z-Ro lamenting leeches posing as friends, and raps about the same thing near the album’s end on “Succa Shit.” The latter betrays honesty and conviction, but is hampered because it’s basically a repeat of the former. Even when Z-Ro flips the script and shows love to homies on “Gang Gang,” his music is marred by an anticlimactic, repetitive hook: “Gang, gang, gang, gang.” The redundancy is a moderate hindrance and is made worse by the album’s length.

“We the People” at Track No. 15 of 18 keeps the album from doing a nosedive. A purposeful beat backs Z-Ro’s focus on society’s ills: “Bitch, I go to Yale and can’t even fall asleep in the common room/Without having to show my ID, why me?” Once again, Z-Ro’s conviction is heavy, and makes this track more than an obligatory conscious cut on an album that plays in the gutter. The track shows Z-Ro still has some gas left in his chrome-plated woman, and leaves an itchy feeling for him to get a little more conscious on his next go-round.

Whether or not that happens, Houston rap heads have this album to fall back on. The rest of Hip Hop nation may be slightly put off by the album’s duration and lack of originality, but still will find beats, rhymes and swagger to enjoy throughout. Sadism proves Z-Ro is far from finished as a rapper to be reckoned with.