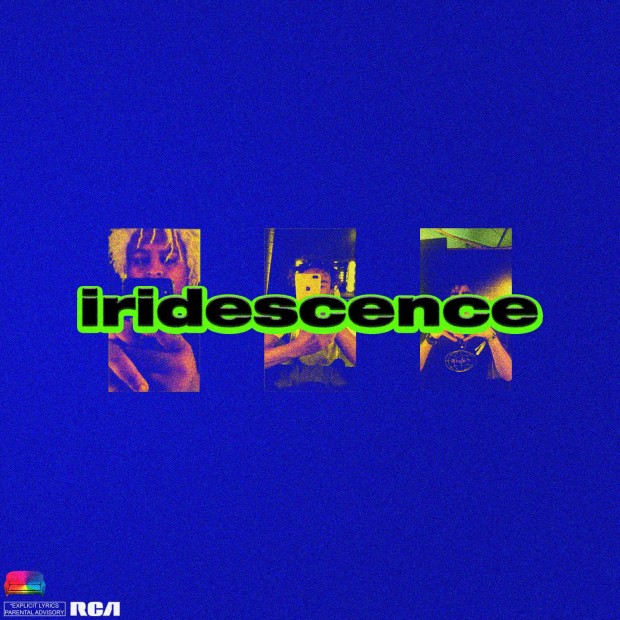 In 2017, Hip Hop boy-band Brockhampton went from obscurity to becoming the music industry’s most buzzworthy group. And when they signed a $15 million deal with RCA in March, there was a sense of infinite potential. But in May, the group fundamentally changed when dynamic bandmate Ameer Vann left following allegations of sexual misconduct and abuse. Months later, it’s still unclear whether the now fourteen member collective has fully overcome this setback.

Iridescence, the first installment of their The Best Years of Our Lives trilogy, ventures into a more experimental and abrasive sound. Though they are still figuring out this new dynamic, their fourth album is a bold and thrilling ride.

“Iridescence” means the “lustrous rainbow-like play of color caused by differential refraction of light waves.” Brockhampton sonically translates that visual experience with bashful production anchored by pop hooks. Things kick off on an energetic note with “New Orleans,” a track that’s has a rich, synthy texture and a minimal chorus from Kevin Abstract. Jaden Smith serves up his own rendition of the chorus, making him one of the few guests featured on the project.

An underlying theme of the record is how fame doesn’t absolve one’s demons. “Thug Life” juxtaposes Kevin Abstract’s sugary chorus about accumulating wealth with Dom McLennon verse discussing his struggle with “skeletons.” The perils of being a celebrity are also explored on album highlight “Tonya.” Over an assortment of spacious drums and haunting cellos, Abstract contemplates quitting his career and going back to Texas. And on the gloomy track “Tape,” Matt Champion raps a cryptic bar about Vann leaving the group: “Wondering who is me now, wondering where you been now. Lose you in crowds, I see now, 14, I see ’em all inside of me now.”

But Iridescence still has plenty of fun. Merlyn’s manic bravado shines on the hard-hitting track “Where The Cash At.” “Berlin” successfully fleshes out the band’s newfound fascination with distortion and features some of the album’s best performances. In terms of production, one of the most impressive moments is on “Honey” when groovy synths transition into an ethereal club remix of Beyonce’s 2011 hit “Dance For You.” And on the charmingly cheesy “Something About Him,” Abstract takes a break from rapping about his insecurities to open up about being in love with his boyfriend.

Despite the dynamic lyricism and production, there are clear signs that the group is still in transition. “J’Ouvert” is a muddled mess that has an off-putting verse from Joba. Similarly, the indie-rock track “San Marcos” aims to be an anthem but falls flat.

As a highly experimental album, the occasional misfire is a guarantee. Ultimately, Iridescence is an exciting way to start a new trilogy and is a testament to Brockhampton’s perseverance.