Review: Sauce Walka’s “Drip God” Is All Sauce & No Substance 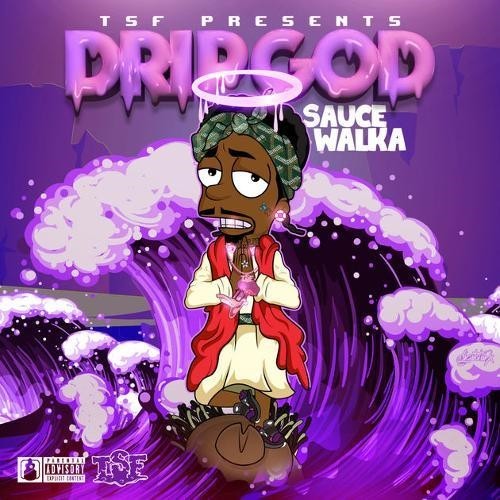 Sauce Walka, one half of the Sauce Twinz, has been bubbling on the scene for a few years now. After first gaining heaps of regional recognition with the Sauce Twinz single “2 Legited 2 Quited,” he garnered more widespread recognition calling out Drake for appropriating Houston culture.

Since dropping his 6 God diss “Wack 2 Wack,” he’s released three solo projects, two of which dropped last year. Staying busy in 2018 with a stream of videos, he has finally unleashed his much-hyped Sorry 4 The Sauce 3 follow-up, Drip God.

Sauce Walka has an infectious energy that surrounds his music, which — at its best — walks the line between old and new school aesthetics, bar wise. The album intro “Drip God” with its rapid-fire delivery not only gets you hyped to see where this project is headed but illustrates (for those in the dark) how he managed to earn the respect of some of his region’s most revered OGs.

“Mask On” hasn’t seemed to catch on in the mainstream as much as it probably should have. No stranger to calling out superstar rappers, he systematically pokes a multitude of holes in Future’s character. “Only plug you ever used was to charge your phone,” he raps — noting that the “Mask Off” rapper had a good job (pre-rap) and adding that he vividly remembers seeing his name tag.

There are very few places where you’ll find guests like the late XXXtentacion, Chief Keef, and “Trill OG” Bun B on one tracklist, which again illustrates that middle ground he enjoys. “The Recipe” with Bun B stands as one of the project’s better offerings, while the other two songs do little to differentiate themselves. X’s chorus about his diamonds being “water like Voss,” and Keef’s chorus about having “so much water” on his wrist and necklace, are painfully similar.

Other collaborations, “Cash On Me” with his partner in rhyme Sancho Saucy and “Money Gang” with Hoodrich Pablo Juan, are there but do little to grab any attention or push the needle past “meh” on the enjoyable scale.

Themes of dripping, water, sauce, and saucing — while his schtick — are (almost) everywhere. At 18 tracks, fatigue begins to set in about halfway. Though he attempts to break up the tracklist with songs that have a more muted style, the lazy foot-dragging flow of “Incredible” and the slightly offbeat shouting on “Shits” (among others songs), could have been chopped in favor of a more concise playlist.

Drip God has glimmers of why Sauce Walka has been able to organically and authentically earn the support of his hometown, and some the same humor, delivery, and rhyme schemes that made “Wack 2 Wack” so effective. While he picks up steam when pointing out the fakeness in the game and weaving in details of his come up — like on the surprisingly dope “They Hurt” — things here rarely dive below the surface.

There are plenty of reasons to root for this guy. Just listen to “Ghetto Gospel,” which he dropped two weeks ago. Unfortunately, this project has a lot of reasons to bang on the skip button.