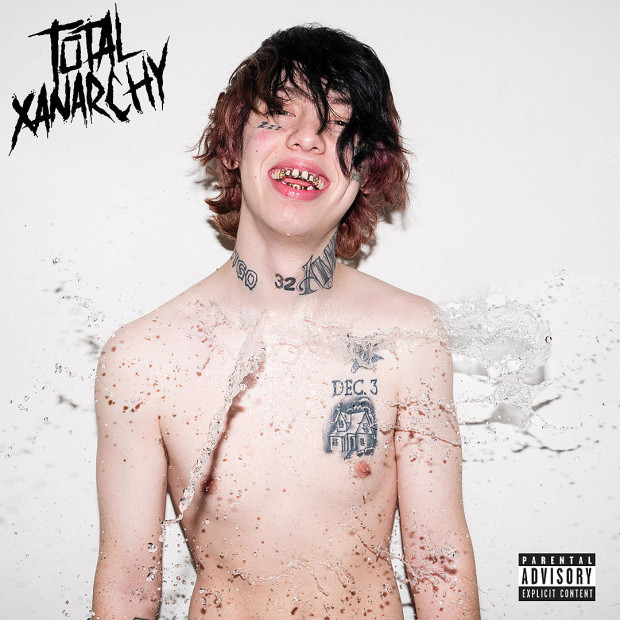 We’re currently full steam ahead inside rap music’s (and its fans’) unwavering infatuation with vibes over verses and Lil Xan has gracefully maneuvered himself to the forefront of the movement.

His persona is akin to most of his peers: unassuming, carefree, nonblack and druggy. The assumptions surrounding his name are accurate — it is indeed derived from the abused prescription-turned-party pill Xanax (a guise he has been working to shed in the months leading up to his album release).

After rising big with his SoundCloud single “Betrayed,” an intoxicating shotgun rush of a next-gen rap song, the 21-year-old Californian born Diego Leanos has neatly added on to his discography with TOTAL XANARCHY. The tirelessly lit debut album will go the distance in separating his talent from his nameless peers but won’t propel him to the same ranks of a Travis Scott or Rae Sremmurd just yet.

With his soon-to-be-former-name borrowed from a prescription drug and his rise to fame seemingly coming outta nowhere, it doesn’t take an enthusiast following the young and reckless up-and-comer to predict the depth of Xan’s music. Every song on TOTAL XANARCHY delves heavily in post-modern trap synths supplied by Bobby Johnson Beats, Ronny J and DJ Fu, among others, and boasts superficial subject matter that hones in on states of euphoria.

The kicker? Most records accomplish their goal within the 2-3-minute mark, making for an extremely fluid auditory experience.

The project kicks off with a barrage of turn-up tracks and digestible speaker busters that aptly set up visions of a rowdy Xan show. 2 Chainz pops in for a golden co-sign on “Tick Tock,” which is powered by increasing bass explosions that peak with mechanical clashes ripe for cooking dances. In all its repetitive glory (the hook of “I wake up/ I throw up/ I feel like I’m dead” virtually dominates the song), “Wake Up” is an undeniably catchy mix of crunked-up mumble rap that personifies Xan down to the bottom of the medicine vial.

Equipped with drowsy articulation tinged with a melodic pinch of raspiness, Xan is far from an astute lyricist but isn’t actually a slouch on the mic in terms of flow and rhyme schemes. Sporting a blissful cameo from Charli XCX, “Moonlight” serves as the album’s most sturdy composition as Xan makes seemingly simplistic lyrics such as “White Mercedes, whip it/ Do 150, hope I do not crash/ Fuck that bitch and hit the dash (dash)/ Fuck that bitch and hit the dash” sound like poetry in three-wheel motion. From the expansive refrain to DJ Fu and G Koop’s sonic capturing of a nighttime oceanside view, the record puts down pavestones on the path to longevity, whereas an utterly generic number in the noisy “Diamonds” does not.

Like most rappers built for this generation, Xan is more an entertainer than an MC — a partier more than a poet. Even with a runtime that’s just under three-quarters of an hour, TOTAL XANARCHY can get exhausting due to the content’s 1.5-dimensional wavelengths.

In spite of fighting his inner addiction on breakout hit “Betrayed” or album opener “Who I Am” (“Xans don’t make me what I am/Xans gon’ mess up all my friends,” he groans on the bubbly beat), at this pace, our one-manchild high runs the risk of a complete burnout — smack dab in the public eye.

It’s this underlying sense of fearlessness that makes the concept of Lil Xan exciting and scary at the same time. It’s madness. Matter fact, it’s XANARCHY.