Review: Tech N9ne Is Back In Orbit With "Planet" 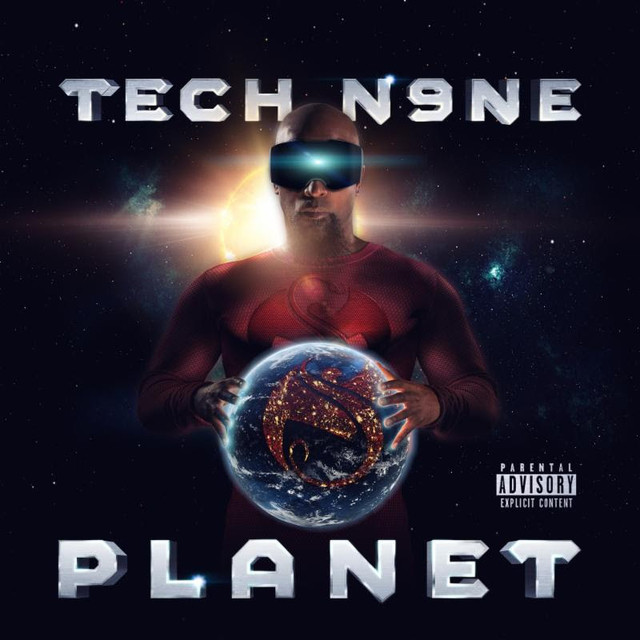 Hip Hop is a young man’s game and the odds of aging gracefully in the genre are Kevin Durant thin. But the genre’s equivalent to Vince Carter is Kansas City rap ‘gawd’ Tech N9ne – the most successful independent rapper of all-time and in the wake Planet, his 20th (!!!!) full-length album, he remains skilled, gainfully employed and relevant as ever.

See: Exhibit A, B and C: “Habanero” with Mackenzie Nicole, “No Reason (The Mosh Pit Song)” with Machine Gun Kelly and Y2 and “Red Byers (Say Som’n Do Som’n)” with Big Scoob and Krizz Kaliko. His rhymes rage with a lyrical edge so sharp, it dismembers. The effortless lyricism and hyperkinetic flows over moody, dark and apocalyptic soundscapes is impressive and speaking of “No Reason,” MGK deserves an honorable mention for his semi-automatic contribution.

However, Red Byers is where N9ne’s weapon gleams the most. He shifts between tough talk and social commentary, but turns aspirational in the final verse: “Anybody fakin’, we say hold up, we got our street and city sewed up/That’s from all the fightin’ and bumpin’, we found the light in the sunken/Hole, down is plight and dysfunction, plowed us right into something…”

Another highlight is the eerie “Comfortable;” a darkly beautiful number where our protagonist checks off his likes and dislikes because – at this stage of the game – he can name names and tell you what he won’t do. And when Tech isn’t channeling disdain toward rivals, the powers that be or unprepared journalists, he touches on his unique odyssey. And in the case of “Tappin In,” he displays regret over a dalliance with a best friend’s lady.

Longtime producer Michael “Seven” Summers supplies the bulk of Planet’s production. The Kansas City studio wiz has been on a bit of a roll lately, given his work on Murs’s new album. While Summers blesses N9ne with tracks that evoke a range of moods, producer Mr. Porter deserves mention for supplying acid with the scalding track “Fresh Out!”

While it’s been constantly said, “old dogs and new tricks” aren’t best friends, Tech still hasn’t found a suitable album runtime. It’s a robust offering to be sure, and a few tracks — “My Fault,” while not an abomination, isn’t especially noteworthy; same for “Won’t Go Quietly,” which is an earnest call for equality but comes off as contrived – could have been left off.

Fans that worried about Tech N9ne falling off should heed Aaron Rodgers’ advice: “R-E-L-A-X.” Tech N9ne makes a triumphant return with an album that, while remaining “on brand” as left field, is as accessible and relevant as ever. This old head ain’t going nowhere.

Don’t nobody want none.