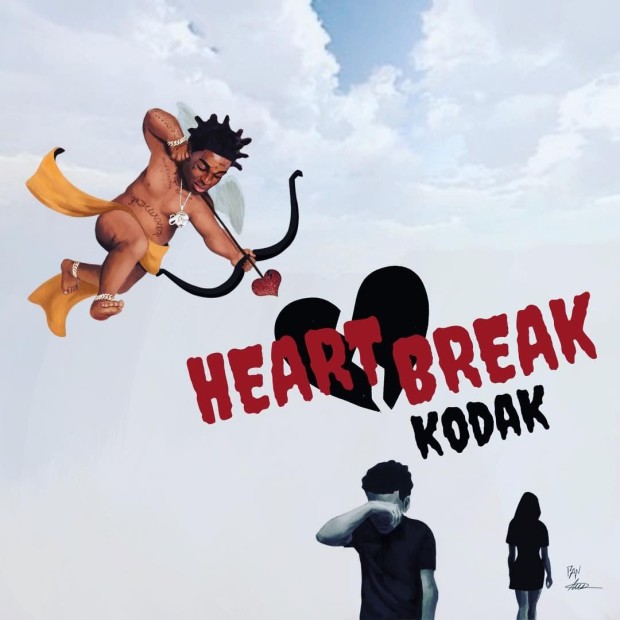 The corporate atrocity that is Valentine’s Day has rightfully become one of the most hated days of the year. Couples often feel the pressure of unreasonable expectations, while many singles beat themselves up for not having a significant other. Kodak Black’s latest dropped on short-notice this Valentine’s Day, and embodies the stress and heartache of relationships in a profoundly melancholy manner.

Even the staunchest purists can’t deny Kodak’s ability to take dark snapshots of human turmoil. The opening “Running Outta Love” belies a man running on “E” in a relationship, and Kodak’s long-faced crooning on the hook hits home: “I ain’t got no hope in us baby (Ain’t got no H-O-P-E)/ It don’t make no sense tryna hold on.”

Kodak‘s tear-stained melodies abound, turning the project into as much an R&B tape as a rap record. While Kodak doesn’t offer much in the lyrics department, his simplicity actually benefits Heart Break Kodak. His hum-worthy lamentations make his statements of sadness more impactful, where tongue-twisting bars would have distracted from the tape’s gloomy vibe.

This is a rapper who dropped this joint from behind bars. Even as he puts his heart on his sleeve, he makes sure to let listeners know it doesn’t pump Kool-Aid. Plucky piano keys set the stage as he tearfully pleads with his girl to understand his thug ways: “I shoulda just listened to what you said but I don’t really like instructions/ I don’t be wantin’ to hear nothing/ ’Cause I was lookin’ up to my cousin/ They was in and out of jail, that was all I seen.”

Considering the man born Dieuson Octave is incarcerated on weapons and drug charges — and was indicted in October on sexual battery charges — these lyrics give Heart Break Kodak a personal touch. The sexual assault charges — which could result in 30 years in prison — make it odd that he’s being so vulnerable on this record. Whether he is trying to portray himself in a new light or his circumstances have forced him to be more self-reflective, the result is compelling art.

The project’s production is 808s & Heartbreak meets the trap (minus any of the game-changing elements from Kanye’s classic). The drums are never overdone, but set slow-to-mid tempos for Kodak to rap over. Profound keys and thick basslines further add to Kodak’s regret, such as on the soul-bearing “Hate Being Alone.”

Most of the beats work well with the tape’s themes, but “When Vultures Cry” features bouncy music that sounds straight out of an ‘80s buddy cop flick. A change of pace from the gloom and doom is welcome, but not in such a cheesy style.

About the only other drawback to this tape is its redundancy. There are really only so many ways to express sadness, and at an hour long, Mr. Octave runs the gamut and then some. “Call You” is a drowsy slog that is only good for counting the seconds to the next track, while “Kicking In” repeats earlier-album sentiments of fear and love, only to a lesser degree.

Still, he threw in a few refreshers, including (the previously released) “Codeine Dreaming” featuring a spastic Lil Wayne. The two throw sizzurp in the face of the anti-lean movement, resulting in head-nodding to Weezy’s dope bars but head-shaking at the cut’s troubling sentiment.

For better or for worse, the troubled rapper seems unapologetic in his nature, whether he’s promoting codeine, pouring his heart out to a woman or making her cry on Valentine’s Day. While this project surely suffers from melodramatic overkill, it remains strong due to its author’s uncompromising honesty.