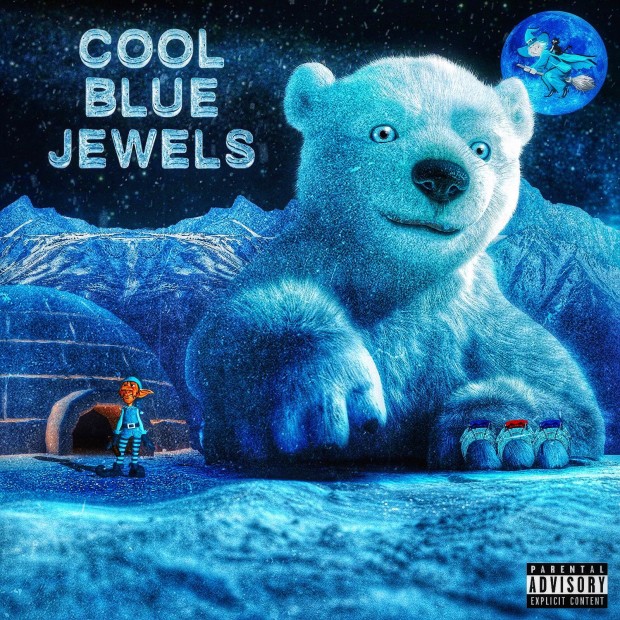 Since 2010, RiFF RAFF has blurred the lines of viral fame and music industry success. Despite cultivating a loyal fan base with his charisma and wacky outfits, his music has lacked any craftsmanship or artistry.

On his latest jawn, Cool Blue Jewels, RiFF RAFF makes it album official with his frequent collaborator Pittsburgh producer DJ Afterthought for a 12-track posse album. The LP stands as a testament to RiFF RAFF’s inexplicable ability to surround himself with talent, as established types like Wiz Khalifa and Project Pat to newcomers in Lil Windex (Yo?!) and Lil HBK all combined for a consistently dull and flavorless package.

The album starts off with a snoozy “Long Night” featuring Wiz Khalifa, Gary Clark, and Mozzy. Over a stuttering beat, each rapper takes turns describing a night of debauchery. Though the verses vary in quality, Wiz Khalifa’s boring hook cancels out any slight chance of it becoming the turn-up anthem it so desperately wants to be.

From there, dreary trap beats and half-assed performances muddle to the experience, save for Memphis legend Project Pat’s genuine groove felt on “Stacking” and the now-buzzing Mozzy once again leaving a lasting impression with his gusto-filled verse heard on the booming “Don’t Owe You.”

Still, the nosedives begin heavily on “Take It There,” featuring fellow Houston rapper Dice Soho, which sports a blaring hook that’s neither catchy or pleasant, while “Long Time,” with Hi-Rez and Pk Delay, simply sounds unfinished. On “Tear It Down,” DJ Afterthought at least takes a risk by offering up a peculiar beat with anxious string instrumentals and dramatic choir vocals. But battler John Sisco fails to match the energy of the momentous production. Hilariously enough, anchor track “Hit The Gas,” finds the album running on empty with the song’s only redeeming quality being Chicagoan Adamn Killa’s raspy, understated verse.

RiFF RAFF’s viral hits in “Tip Toe Wing In My Jawwdinz” and “Dolce & Gabbana” have definitely succeeded in cementing his cult status but for whatever reason on Cool Blue Jewels, he decided to sacrifice his polarizing qualities to simply be conventional.

It’s a bit late in the game for JODY HiGHROLLER to be taken seriously, musically. Time to get back to the carefree antics.