Review: TiRon & Ayomari's "WET: The Wonderful Ego Trip" Is A Headrush Of Greatness 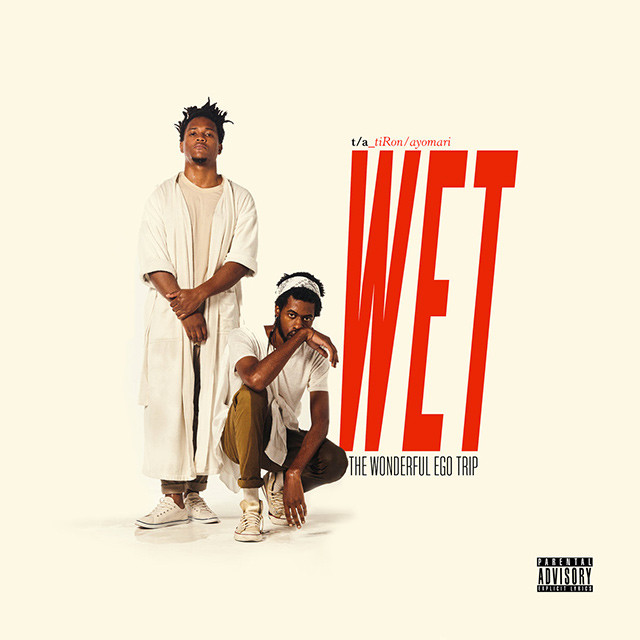 Shortly after Drake released So Far Gone in 2009, a tsunami of up-and-coming artists’ free projects flooded the internet, in hopes to duplicate the same success.

West Coast outcasts TiRon & Ayomari traced a similar blueprint with their food-fixated The Cafeteria Line imprint through well-received solo projects like Ketchup, MSTRD and The PB&J Solution. But it was their 2011 female-analyzing joint project, A Sucker For Pumps, that garnered them universal acclaim from those who checked the project, which fell well underneath the rap radar. In fact, this very publication caught overwhelming flak for not reviewing the project. [Editor’s note: This EIC awarded it 4.5/5 at another publication at the time; humble brag].

Two years removed from quietly dropping their last project, the creative minds have once again convened for another outstanding body of work with WET: The Wonderful Ego Trip, a deep dive into the realm of anthropomorphism spoken from the cool kids’ perspective. Loads of lyrical phenology, lush acoustic backdrops and witty idioms all go the distance in masking the fact that these two Cali boys are always on the hunt for chill girls who are DTF.

If W.E.T. has any surface flaws, it’s that the album sonically feels like it has run its course midway. The aforementioned acoustic vibes do tend to stick together like a book that’s lost a battle to a spilled glass of water. That said, too much of a good thing can still be valued for the experience it’s created. A breezy number such as “Airplane Mode” emotes two-step grooves while the banging “Chivalry is Dead” works together in harmonious unity to make the fairer sex feel desired.

There’s also organic Hip Hop to be consumed through the drum-laden “Wzup!” (featuring an energetic cameo from the elusive Jack Davey), and subtle hilarity on “Holocene (Is The List Closed?)” — a modern-day club ode that hones in on reality. And then there’s “Everybody’s Doing It,” a haunting call-and-response record that really highlights the duo’s talent in every facet of the studio.

TiRon serves as the apparent brainchild of the pair, possessing the ability to spew rapid-fire provocativeness at a moment’s notice while Ayomari is the unassuming melody-controller who anchors the track past the finish line. This chemical brilliance is best exemplified on “Greener Grass/Cleaner Water,” where they pull off a one-track Speakerboxxx/The Love Below of unfiltered O2 that reigns as the album’s highlight.

After soaking up WET: The Wonderful Ego Trip, the classic question is posed: if a tree falls in the forest and no one is around to hear it, does it make a sound? TiRon & Ayomari have once again proved that by meticulously constructing their craft in the studio, undisputedly dope music is the end product. But without that cultural indentation to coincide with it, they won’t be able to lay claim to their stake on history.

It still doesn’t make their journey any less worthy, though.