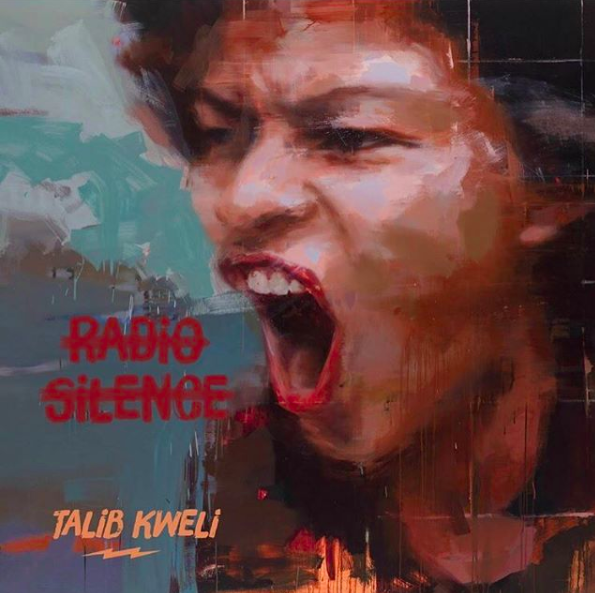 Nearly 20 years after delivering 1998’s Mos Def and Talib Kweli Are Black Star album, Talib Kweli has become synonymous with political activism and his polarizing Twitter account almost as much as the words “classic Hip Hop.” Following the April release of his collaborative EP with Styles P, The Seven, Kweli boomerangs with Radio Silence, his first solo album since 2015’s Fuck The Money.

Clocking in at 11-tracks, Radio Silence begins loud and clear with “The Magic Hour,” which ushers in a nearly 45-minute, jazz-infused journey through the mind of an educated and seasoned MC.

As Kweli explained to HipHopDX in June, his lightning fast ability to compose tweets has sharpened his pen game, which shows on the new album.

For example, “She’s My Hero” is like a lyrical punch to the gut. The song revolves around the case of Bresha Meadows, a girl who, at 14, gunned down her father after years of alleged physical abuse.

Produced by Oh No, the brooding track allows Kweli, a father of two, to meticulously detail the tragic events that led to Meadows’ incarceration as he spits, “Bresha Meadows resembles my baby girl/ 14 years old taking her place in this crazy world/ Her and her brothers lived in fear of her father’s rage/ He beat her mother so often she prayed for the day she could be far away … Bresha Meadows took matters into her own hands/ 14 years old with more courage than a grown man.”

As the emotional song comes to a quiet close and the deep rolling bass for “Chips” kicks off, the vibe quickly changes course as Waka Flocka flexes over the explosive production with brutal lines like, “Y’all really thought I could hardly rap/ Better watch your front/ Better guard your back/ Every muthafuckin’ bar is a heart attack.” Initially, a collaboration between Kweli and Waka Flocka doesn’t seem to make sense, but the two manage to pull it off with their electric energy and the track’s relentless, head-nodding bass.

Whether it’s Waka Flocka on the aforementioned “Chips” or Rick Ross on “Heads Up Eyes Open,” the guests he recruited  — with the exception of Anderson .Paak and BJ The Chicago Kid — aren’t exactly expected for a Talib Kweli album, but they primarily work. The title track and its hook, provided by former Dirty Projectors member Amber Coffman, is well intended but almost immediately goes stale, while Freestyle Fellowship’s Myka 9 is barely recognizable with his baritone delivery. Coupled with the song’s snail pace, it’s easily forgettable.

Not surprisingly, Kweli truly shines on the politically motivated tracks when he’s able to rap about things he’s passionate about. “All Of Us” featuring Jay Electronica and singer Yummy Bingham, another album highlight, starts with audio of a political rally in Ferguson, Missouri that repeats Assata Shakur’s words, “It is our duty to fight for our freedom. It is our duty to win. We must love and support each other. We have nothing to lose but our chains.” Kweli takes the reigns first but allows enough room for Electronica to explore the topic of systemic oppression as if they’re a united force. The two seamlessly ping-pong off each other as they make a plea for unity. While the socio-political commentary may be typical of Kweli’s catalog, with this album, it seems more urgent considering the current political climate of America.

Going out with a bang, album anchor “Write At Home” featuring Bilal, Datcha and Robert Glasper easily ranks as the most musically sophisticated song on the project. With its delicate piano, minimal beat and full, sultry chorus, it’s like a gentle landing after a turbulent flight, ending Radio Silence on a strong note.