Review: KRS-One's "The World Is Mind" Does His Catalog Little Justice 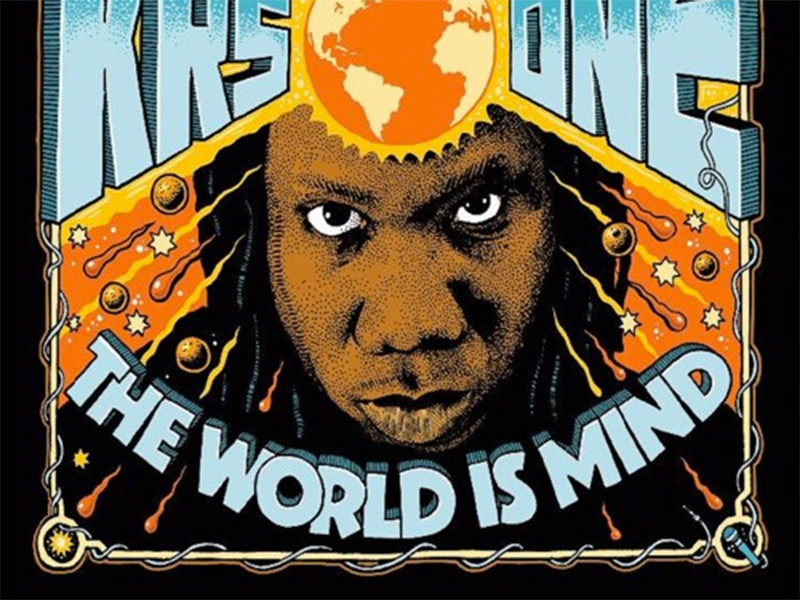 KRS-One has remained one of the most polarizing artists in rap since his emergence with Boogie Down Productions 31 years ago. He’s kept media and rap fans on their toes with his brand of edutainment, hot takes on history and government oppression, eschewing mainstream credibility, and his disdain for radio airplay.

Now on the thirteenth solo album The World Is Mind, The Teacha reworks his pedagogy professing the importance of accountability and thought power using Hip Hop to decipher metaphysics, create your own reality amid chaos, corruption, fake news and enemies as our leaders. But it’s more of the same that he built his brand upon — lambasting the current state of Hip Hop while pointing to the old school Hip Hop traditionalism to mark the culture’s growth and stagnation; resistance in today’s divided political landscape; Pan-Africanism; and battle rap braggadocio lyricism.

The album employs its share of less than favorable moments “RAW B.E.A.T.,” which misses the bullseye for a club joint according to the chorus with KRS’ attempt at what sounds like quasi-opera tenor crooning. A record like “Keep Flowin” features a dull hook that doesn’t foster the energy it shoots for. KRS has made some of the most memorable choruses in rap history. Certified classics such as “The Bridge Is Over,” and “Outta Here,” are par for the course that he set in the early and middle stages of his career. Additionally, several lyrics don’t reflect his proclaimed yearly practice to destroy the career of rappers in the Billboard’s top 10 chart with a battle rapper written for each of them “Take it back to the Castor bunch/I’m having these rapper for lunch/I’ll give their captain a crunch,” on the acapella “Put Your Ones Up”; “I want to see you coming off/I’m more of a partner than a boss/hitting the top like the North” from the wormy synth keyboard-driven “No Problems”; “They in the past, I’m in the right now/Thirty-city tours, these critics be like, ‘How? Wow!’” from “Don’t Ever Stop”) are cringe-worthy from The Blastmaster.

The album is not without its highlights, however, as relative opener “Keep Clicking” takes it far back in time to ancient African civilization in the South African Khoisan tribal language clicking consonants with his cadence. The beat changes in between verses with a South African choir to transcend time between his Bronx park jam origins and the indigenous villages of the Motherland. Other standout cuts include the inspirational, ambient piano keystroke-laden “My Dreams”; “You Ain’t Got Time,” which boasts of Malcolm X speech excerpts about the perils of criminality; his ode to New York City graffiti artists “Out For Fame,” a quasi-reprise and dope update of the song of the same name from his 1995 self-titled sophomore solo album.

With stellar boom-bap production aside from DJ Desue, British rapper/producer K.O.D., Steez and KRS himself keep the generational torch lit. There are several instances on the record where KRS shoots his figurative 9MM that still has “bang” in his authoritative vocal style, but less kickback in multi-layered wordplay from his days as a standard bearer for the art of MCing during rap’s Golden Era of the late eighties and nineties. See the middling “Same Shit” which sports lyrics, “I’m the same as a plane that lifts off — fly/They they same as a rip off, a lie” and “Y’all need to wake up and join with the woke folk/ignorance is only gonna keep you with them broke folk.” The message simply feels less engaging with simple rhyme couplets.

Knowing the legacy of Kris Parker, he “can’t stop and won’t stop” putting out his message by all means necessary. But as for him mentioning he “wrote and recorded this album in the same week” on “Same Shit,” he may have needed more focus to show that he still has mad izm for fans to revel in his rhyme arsenal.