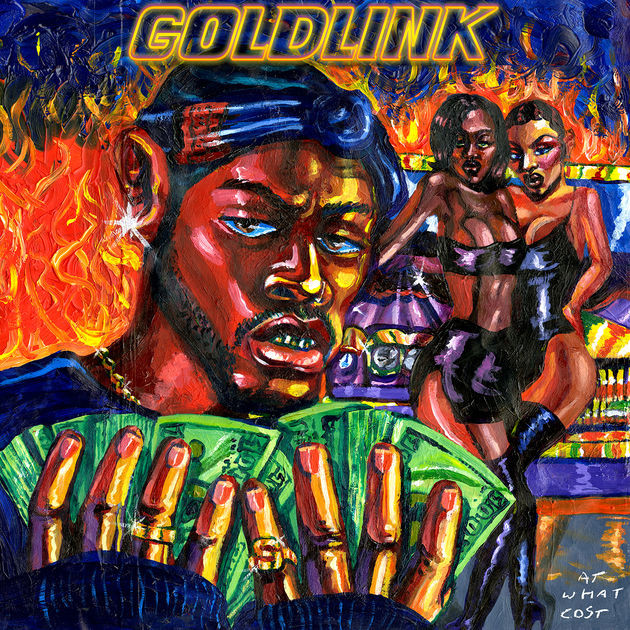 As it stands, modern day casual Hip Hop listeners have become increasingly slow to embrace newer acts that aren’t loose extensions (if not blatant carbon copies) of already viral sensations. This explains why Washington, D.C. native GoldLink has remained relatively undiscovered by the masses despite having a stellar 2015 where he built a devoted grassroots following. A hybrid emcee/singer, he defies classification having gone from an enigmatic acquired taste with his 2014 debut The God Complex (which oddly sampled everything from Will Smith’s “Men in Black” theme to The Pharcyde and Britney Spears) to an ambitious yet forgettable arrival a year later with the Soulection release, And After That We Didn’t Talk.

At What Cost picks up where GoldLink last left off, as he makes slight modifications without departing from the surefire formula of proudly repping his troubled city while simultaneously exploring the thrills of woman chasing. The lead single “Crew” was a catchy show of unity that established common ground with the District’s own gun-toting hooligan Shy Glizzy; this preceded “Meditation” a dance tune where GoldLink submits to love in his own unique vulgar fashion. The latter was produced by Kaytranada who continues shifting the culture with upbeat futuristic dance grooves, a part of his routine being an extension of The Neptunes’ lineage that manifests on the keyboard-driven “Have You Seen That Girl?” With this playful ode to the single life, our protagonist takes you through the heart of his sketchy stomping grounds, jumping in and out of short stanzas shouting out various neighborhoods and dropping slang that outsiders would need help translating.

Intent on carrying the DMV’s eclectic spirit around the globe, GoldLink skillfully uses At What Cost as a platform for celebrating its metropolitan musical diversity. His hometown pride is authenticated by songstress Mya on “Roll Call”, a pop-friendly nod to hood dwellers who claim the 202 area code as a badge of honor alongside Maryland’s PG County residents on the outskirts of our nation’s capital. Local veteran and underground legend Kokayi plays the role of a club DJ on the rap-free interlude “Hands On Your Knees”, while the region’s greatest breakout sensation Wale pops up on the commercially accessible slapper “Summatime”. Sequentially, this all too familiar tale of flings with women magnetically attracted to entertainers in Los Angeles follows the heartfelt “Herside Story”, a prime candidate for the R&B format’s daily rotation where GoldLink walks the thin line between loving tenderness and being blinded by his success.

Where GoldLink hardly breaks new ground thematically waving the flag for tortured souls aiming to survive ghetto violence, he has continually achieved sonic innovation having coined his own sub-genre “future bounce.” A big creative risk that strays from countless lazy derivatives, in-house producer Louie Lastic deserves credit for helping to shape this movement from the ground up; his high-spirited melody on “Same Clothes As Yesterday” serving as the perfect backdrop for GoldLink and Maryland’s Ciscero, both using supreme levels of confidence to thwart the harsh realities of their environment. Comparisons to Chance The Rapper are readily available as the album ends with “Pray Everyday” where jubilant gospel is fused with trap, but “We Will Never Die” depicts the now moderately successful artist as deathly close to a tragedy at a shiftless earlier point in life. These opposing facets and snapshots of spiritual warfare indicate that GoldLink’s choice to go full steam ahead pursuing his musical gift not only gave him refuge from the streets, he uses his work to inspire and speak for those still stuck in desperate pursuit of a way out.

Daring to explore uncharted territory once more, GoldLink should be received with open arms by his free-thinking fan base, yet At What Cost could still present challenges for hesitant newcomers. Though he’s far advanced compared to many of the more successful acts in his peer group, his distinct delivery, dialect and accent are nearly indecipherable at points, making it easy to miss the messages contained within his flows. Still growing into adulthood at the ripe age of 23, his musical maturity is compromised by a penchant for using Too $hort’s favorite descriptor for the opposite sex; a likely reflection of numerous factors raising his generation to view long-term relationships as necessarily dysfunctional and strife driven. Ahead of the times for three years and counting, as GoldLink works towards perfecting his own vibe he stands a chance at becoming a more prominent cult icon, if not a major star once the world is fortunate enough to catch on at large.