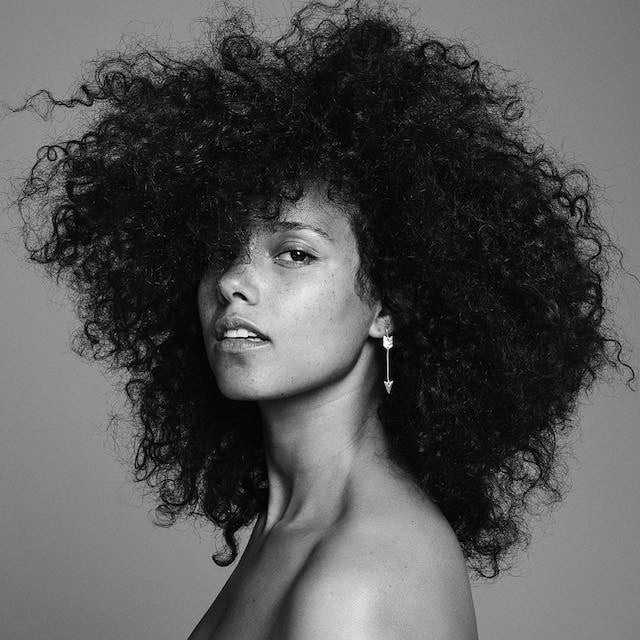 One of the most the remarkable things about Alicia Keys is her inherent ability to inject an infinite amount of emotion into every note she sings. On the Hell’s Kitchen survivor’s sixth studio album, HERE, the distinguished songstress seems to purge her soul, which is really nothing too out of the ordinary. Since emerging with her 2001 Grammy Award-winning debut, songs in A minor, she’s built her career around piano-laden ballads and intimate content. However, at times, the flipside of the mirror revealed that to be a weakness as well. It’s always risky to become too formulaic and predictable, but HERE at least reflects the growth of a strong, 35-year-old woman.

Throughout the 16-track effort, she touches on everything from addiction and insecurity to her war against cosmetics and complex family issues in a way that is nothing but genuine. Empowerment also makes its way to the surface on songs like “Cocoa Butter,” which addresses insecurities and “Girl Can’t Be Herself,” a Caribbean-flavored joint focused on her make-up free campaign. “What if I don’t want to put on all that makeup/who says I must conceal what I’m made of/maybe all this Maybelline is covering my self-esteem,” she sings, a jab at the false image of perfection personified in the media.

The album is intended to speak from several different personas that Keys has created for herself. Most notably, on “Illusion of Bliss” she takes on the form of a 29-year-old addict with a blues-heavy background as she sings, “Easy way out is this high, I confess.” The record does an impeccable job of capturing the toll a life of addiction takes on a person.

On “Blended Family (What You Do For Love),” a defining moment of the album and the only track to have a feature (courtesy of fellow Harlemite A$AP Rocky), she seems to be speaking from Alicia Cook’s perspective. It touches on her marriage to Swizz Beatz (who mans the instrumentation alongside the incomparable Mark Batson) and role as stepmother alongside her own two biological children with the famed producer.

The family theme is an underlying current flowing through the majority of the material, but the Pharrell Williams-produced “Work on It” is probably the most telling. As many women get into their 30s, things that once seemed so important (i.e. gossip, vanity) take a backseat and values ride shotgun, something Keys easily exemplifies in the lyrics. The struggle in her voice to keep the family together is palatable as if it’s something she’s lived through and continues to fight for on a daily basis. And forever the Hip Hop head, Keys delivers “The Gospel” on an explosive power ballad about striving to make ends meet while utilizing the Wu-Tang Clan “St. Ides Commercial” trouvaille whereas the latter portion of “She Don’t Really Care/1 Luv” embodies the Illmatic nucleus of the same name.

True, there are a couple of confusing moments. Backed by an acoustic guitar, the bluesy rap of “Kill Your Mama” doesn’t execute the concept clearly. She’s meant to be singing from the outlook of Mother Earth, but it’s not exactly evident initially. The album closer, “Holy War,” also offers an oddly placed hooked, which is more Sheryl Crow than Alicia Keys. But that’s where the criticisms stop. Peppered with anecdotal interludes she does with her friends (one being Nas, who drops jewels on “Elevate”), HERE is sewn up together nicely and a testament to what Keys always gets right – speaking from the heart as she strokes those 88-keys.