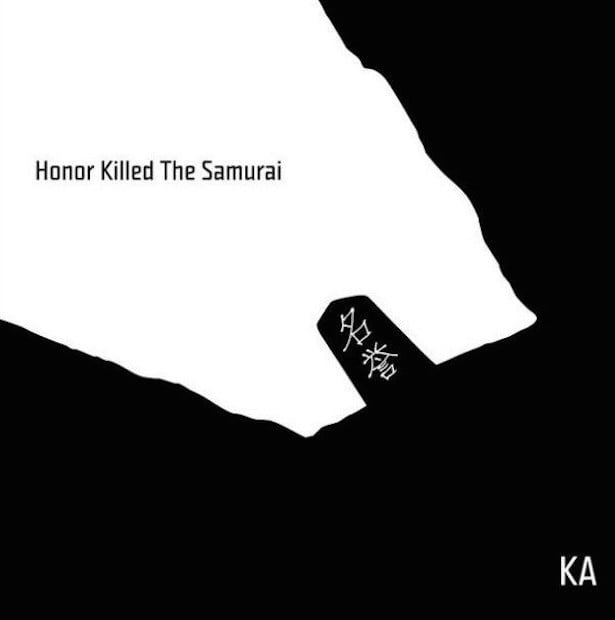 Initially emerging as an affiliate of underground group Natural Elements during the independent Hip Hop boom of the mid-1990s, it’s only in the past few years that Ka – the Brownsville-based rapper who also holds down a day job as a fireman with the FDNY – has garnered critical acclaim with his trademark brand of dark, atmospheric New York crime noir rap.

Just as The Night’s Gambit was built loosely around a chess motif, and Days With Dr. Yen Lo drew inspiration from the Cold War spy novel The Manchurian Candidate, Honor Killed The Samurai sees Ka borrow themes and ideas from Japan’s ancient warrior culture. Though little more than a handful of spoken word interludes that touch on the samurai’s military strategy, ethics and philosophy, they ultimately decorate the album’s subject matter with added color and depth.

For instance, on the powerful “$”, which features some of Ka’s most overtly sociopolitical content to date, a woman’s voice declares that “worldly goods are shackles to [a samurai’s] character” as Ka reveals that “my civil aim’s to get a little change, and still be me.” Elsewhere, he zeroes in on those MCs who have gotten wealthy off Hip Hop but still fail to give back to their communities: “I need money, not for trivial material/It’s to fix our floors, the whole cause is ethereal…. With bars of greed/How many cars you need?/The fathers bleed to fill ribs of kids that hardly read/Fuck your little rhymes/And them new fines you purchase/If you ain’t buying no soup for them soup lines in churches.”

At other points, the rhymes flicker like a series of vivid, monochromatic flashbacks. Just as Ka’s remarkable Instagram page pays tribute to the smouldering chaos of pre-gentrification New York in the 1970s and 1980s, many of the songs here feel like a deep dive into a box of faded old Polaroid pictures of his past life. Opening track “Conflicted,” for example, plunges the listener straight into Ka’s formative years. Over a cavernous instrumental, he raps about seeing guns in school, describing a “tough upbringing/Swore I was the hardest/A lotta years starvin’ before I was an artist…” And while rapping ultimately provides a way out of the slums in the second verse, he continues to ponder the conflicting advice from his parents: “Mommy told me ‘Be a good boy/Need you alive/Please survive/You my hood joy’/Pops told me ‘Stay strapped, son’/Need ya shotty/Be a body/And catch one…’.”

Similarly, Ka explores life as a stick-up kid on the awesome “Destined” as a filtered, frazzled synth line sets the tone for his tales of “dodging police bracelets.” While less capable rappers would be content to simply scream a bunch of over-the-top trife life boasts all over the track, Ka seems more guarded when revisiting his past, and the song overall carries a regretful, mournful vibe: “Had the trigger right by the abs and liver/Young’uns could find some of my guns, they dragged the river….Wasn’t made for fronting/To bring the gauge was nothing/Static start, I had the heart to squeeze/Took less than nothing to pull it/My first lesson was never bluff with a bullet/If you show it, gotta blow it….”

Ka tends to handle his own production, and the rumbling basslines and trademark drum-free instrumentals are all once again to the fore on the album. On “That Cold and Lonely,” he gets firmly in the zone, flipping the haunting bass, piano and ghostly scream from Yusef Lateef’s “Fourth Movement: Passacaglia” (also sampled in Cormega’s 2001 banger “Unforgiven”) into an imposing beat. “Just,” however, represents something of an expansion of his musical palette, with weird, siren-like ‘70s prog-rock keyboards forming an acid-trip like canvas for Ka to reminisce about “moving rocks like Easter Sunday.”

Such menacing musical backdrops, coupled with Ka’s hushed, raspy tone, ultimately imbue Honor Killed The Samurai with a quietly fearsome vibe which never lets up over the course of the album’s 10 tracks. As on previous Ka releases, his lyrics are dense and often cryptic, with the wider point of his grimy street narratives often only becoming clear with repeated listening. In the end, it proves to be an assured, forceful performance from the Brownsville native, and one of the most compelling rap albums you’ll hear this year.