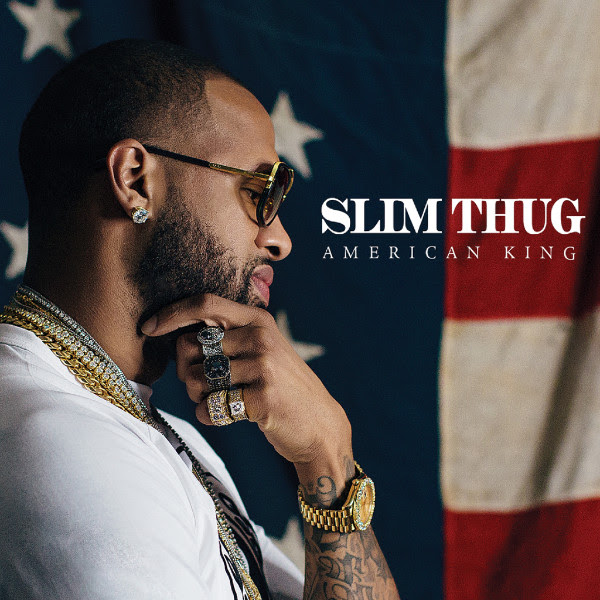 America is amidst turbulent times with unarmed black men dying at the hands of police and Donald Trump running for president. Slim Thug is feeling the heat and uses personal growth to inspire himself and others on Hogg Life, Vol. 4: American King. The result is a collection of impactful tunes that uplift and motivate, even if his lyrical approach is too simplistic.

Thugga declares right from the start that this isn’t the guy who sipped Barre on “Still Tippin’.” “No drama no stress only way you around me/I feel like I’m too cool to end up back in that County,” he proclaims on the opening “King.” He also details his growth as a dad on a touching “Love Letter” to his children: “Never thought I’d be a single father/But it’s made me love my kids harder.” And, of course, the business-minded Boss Hogg stays focused on his paper, but in a more responsible way. “Went from sellin’ bricks to sellin’ brick houses,” he spits on “Family.”

His introspection and positivity is refreshing and imbues each song with a spark that engages the listener. As Slim has matured, he has a worldview that has widened. This leads to a few sadder tracks, including “IDKY” and “They Just Wanna Be Heard.” The former speaks out against police violence, with Thugga rhyming, “We see cops killin’ blacks on the news every day/And they do it like it’s OK.” The latter finds Boosie Badazz shining over melancholy piano keys while showing empathy to youngsters running the streets. Thugga doesn’t just illuminate problems, though. He helps his listeners through the hard times. He reminds us that things will “Get Better,” over classic, slow-rolling Houston organs. “Enemy” is a standout, on which he tells his black brothers, “I’m your friend not your enemy, at least this how it’s supposed to be/Same color should be same team/We both from the bottom tryna chase the same dream.”

The themes and sentiments may have evolved, but Slim Thug’s music and rhyme schemes remain familiar. That’s both a strength and a detriment to the album. Simplistic but effective piano keys, drawn-out organs that would make Pimp C proud, and soulful cries back his rhymes. The result is music that is pleasantly familiar but never tired. The same can’t be said for Thugga’s lyricism. He seldom strays from his syrupy flow and elementary rhyming, such as on the first verse of “1000”: “I feel like I’m the realest nigga walkin’/I live this rap shit y’all talkin’.” One would have hoped that within the content would have come creativity in Slim’s rhymes. However, basic rhyme schemes are abundant and, at times, underwhelming.

This album’s other major drawback is that the themes grow somewhat redundant. Songs like “Get Rich” and “Hold Your Head Up” are strong on their own but are unnecessary because they repeat the themes of hustling and keeping your chin up, respectively, to a worn-out effect. Fortunately, a three-track run ends the album on a strong note. The album’s closer, “Chuuch” finds Slim Thug leaving bad influences behind as he aspires to be the best man he can be.

In turbulent times, Slim Thug’s triumph is in creating positive music that doesn’t sound like an after-school special. Though somewhat lacking lyrically, Hogg Life Vol. 4: American King is aspirational without sounding forced and wise without being preachy.