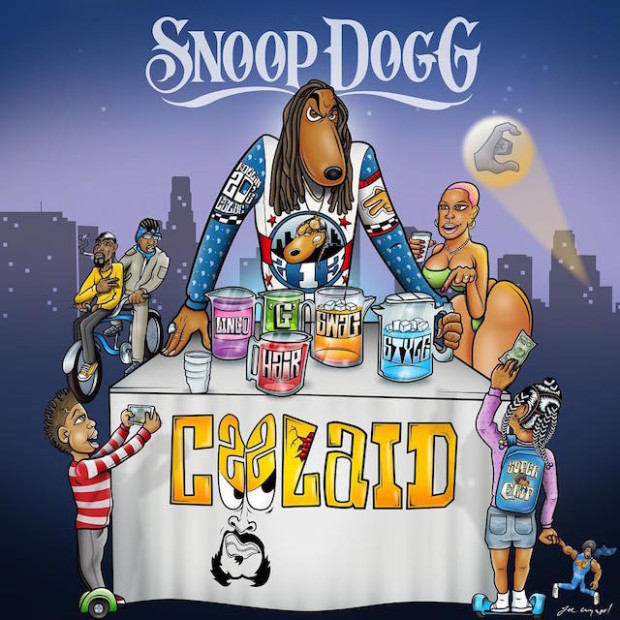 Maintaining relevance by remaining open to new ideas is a key to longevity and respect, a concept Snoop Dogg has a keen knack for at this point. Last year’s snoozed over LP BUSH was the overdue culmination of collaborations with long-time benefactor Pharrell Williams but the world’s most recognizable rapper returns to form having outlasted practically all of his peers with Coolaid, his fourteenth solo album. The cover shows his well-known animated likeness pouring cups for youth from jugs labeled Swag, Style and Lingo, as he puts on a 77-minute crash course in self-celebration while setting out to prove he deserves consideration amongst today’s elite.

“Legend” sets things off, an intro showing the willingness to adapt to updated formulas, as he yells his delivery while breaking down his extensive history. Snoop’s 180° energized switch from his usually cool demeanor caters to the dabbing generation that likely views him as a relic, but in turn, he also makes certain to please day one followers. “Ten Toes Down” is steeped in the rhythms of traditional West Coast easy riding music, while Just Blaze bridges the gap between the sinister ‘90s and DJ Mustard’s modern day simplicity on “Super Crip”.

While Snoop resumes working with a diverse range of producers and an array of guests, Coolaid establishes for the umpteenth time that he’s more than capable of holding his own. To his credit, close associates and other elder statesmen show up in lieu of predictable sure shot chart toppers that could come off as nonsensical. Early single “Kush Ups” featured affable stoner in arms Wiz Khalifa once again helping the Dogg reach the youth with humorous references to smoking as a form of exercise. Where this is an organic means of staying hip, Jazze Pha singing about Instagram culture on the otherwise catchy “Double Tap That” could be taken as an overreach for radio play. The biggest fault lies with Swizz Beatz’ contributions that add little to the equation. “Light it Up” is pretty pointless without drums, and Snoop struggles to find his place on both “Side Piece” and “Let the Beat Drop”.

A seasoned veteran who always manages to keep in touch with his roots, Snoop Dogg has an impressive sense of urgency regarding his status as a symbol for LA street culture while no longer living in the thick of it. (“I don’t hang in my hood but I bang in my hood, I’m affiliated” he laments on the appropriately included “Affiliated”.) Coolaid essentially functions best when it delves into old school influences, from the ‘80s R&B sound of “Oh Na Na” to the post-disco homage “Two or More” and the electro-funk of “What If”. Though this project shows he can continually develop his style without losing a shred of authenticity, the trouble is an utter lack of cohesiveness. Casting such a wide net over the span of 20 songs ends up being a gift and a curse as the brighter moments risk getting dimmed out by extremely ambitious attempts that fall short. Running so long ensures filler and repetitive topic material, but overall Snoop makes a strong case against ageism as he fuses the adult contemporary and Gangsta Rap genres.