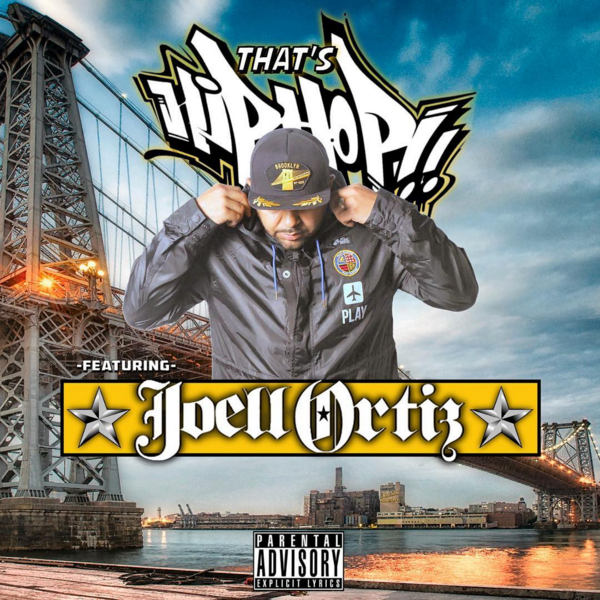 The first thing you hear Joell Ortiz say on his new album, That’s Hip-Hop, is that “the 15-year-old kid that cyphered on the block wants to battle, that guy in me wants to battle, but the recording artist wants to stay out of that ring.” Said quote is delivered over the album’s intro track, “The Word”, which sheds a fair amount of light on where the Slaughterhouse 25 percenter finds himself in today’s industry. As a tremendously skilled technical rapper, Joell is caught between that rap and a hard place. He is caught somewhere in between wanting to do nothing but flex his lyrical abilities bar after bar (as he would in a battle) while also trying to create well-structured rap songs with all the bells and whistles. For a true MC like Ortiz, it’s hard balance to find; especially when your “15-year-old self” just wants to air out battle bars. On That’s Hip-Hop, Joell aims to capture the best of both worlds but clearly leans more towards what you’d expect-razor sharp bars met with battle orientated delivery. Although he does manage to bring a decent amount of singable hooks and non traditional instrumentation to a handful of tracks, it isn’t hard to tell that Joell focused most of his efforts into crafting the slickest metaphors and similes humanly possible.

After the album’s quick audio bite intro, Joell gets busy on “Last Man Standing”–a track that has lines worthy of a BET cypher with a screeching guitar chord backdrop. “I’m used to looking down with a smile/I’m the Patriots offense, I haven’t been on the ground in a while” is just a little example of how crafty Ortiz can get. His set up-punch style exposes poignant punchlines at every turn.

The album only runs 30 minutes long and is jam-packed with other voices other than Joell’s. Seven out of the 10 songs have featured artists; some of which help, others that hinder. Kool G Rap and Lil Fame bring out the album’s best on “Reppin N.Y.” whereas Billy Danze sounds completely lost on “Fall Back.” Ortiz even employs YouTube rap sensation Token on the double time bar fest “Kill At Will.” Lines like “Wait a fucking minute/I don’t think you know who in it to win it/I spit it, definitive/Ripping every lyric they spittin’, ridiculous/Listen, the kid is very gifted/Like St. Nicholas on the 25th” are hard but hit even harder over Domingo’s evocative beat.

The album doesn’t have a clear cut direction or anything close to a hit record but what That’s Hip-Hop lacks most is a glimpse into Joell’s deeper side. We get a lot of wordplay and punchlines revolving around out-rapping other MCs and stealing their girls but we never hear about anything overly specific. “Trouble,” a song illustrating his hard knock come up, is as close as we get to seeing into his real psyche. For being a rapper as gifted at articulating thoughts and feelings as Joell, he keeps the subject matter disappointingly surface.

Whether you download a couple tracks or listen to all 10 tracks on repeat, it isn’t hard to tell Joell Ortiz’s pen cannot be questioned. That’s Hip-Hop won’t necessarily revolutionize his solo career but it does remind us that the art of rapping at a high level isn’t dead. Yaowa.