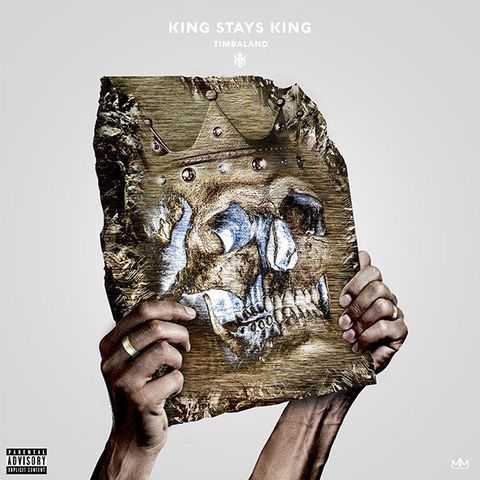 It’s been 20 years since Timbaland dropped acid on the soul and rap-as-pop musical scene. 20 years later — a vast array of sumptuously diverse melodies, scattershot drum hits, punctuating basslines and star-turns for a plethora of modern legends via song — we’re treated to King Stays King, a mixtape that showcases the latest releases from the iconic producer. Eighteen unique and well-executed productions still fall short, as this emperor’s old tricks — even in the age where they’re showcased and lauded on Fox’s Empire — have become tiresome. As well we learn just how gifted the likes of Missy Elliott, Ginuwine, Jodeci, and Aaliyah in her prime were, as Aaliyah B-sides and a new crew of stars that includes Timbo protege Tink, Young Thug, Rich Homie Quan, Migos, and 2 Chainz, also fall short in reaching the former quartet’s iconic status. Timbaland may have once been the “king” of left-leaning pop tunes, but in sounding tired in a pool of productions and producers he’s directly inspired, it’s readily apparent that the 43-year old Norfolk, VA native has begun to hand over his crown.

There are three layers of tracks on this release. There’s the classic Timbaland material, soulful trap ballads likely meant for One Republic and Timbaland trying his hand at modern pop radio fare. In understanding just how all three variations of the “king” fall short of him keeping his crown, we best understand where this mixtape comes close, but never quite causes moments of absolute elation.

Foremost, many of these tracks feel as if they were bittersweetly stowed away by Timbaland for a decade. Aaliyah’s “Shakin” features a lovely acapella, and maybe a smidge too much emceeing from Timbaland, but it’s in the production itself lacking the histrionic excellence of Billboard pop chart number one “Try Again” — the track with which it shares the greatest sonic comparison — that it falls short.  As well, there’s a more-lucid-than-usual Young Thug feature for dark-toned woodwind led “Didn’t Do It,” ambient whistling and 808-driven Blaze and Tweezie-featuring “Servin’,” whirring melody helmed and Young Crazy and Breeze Barker vocalised “Callin’ and Callin’,” and Tink’s “Ugly”-reimagining “Drama Queen” that deliver old-style Timbaland vibes, too.

Unfortunately, there’s a school of Southern rap that hasn’t advanced too far past Magoo’s 1996 “Luv 2 LuvU” remix proclamations that “Girl my persono, I Cher like Sonny Bono / Black and white keys, lay girls on my piano,” so current era emcees Young Thug, Blaze and Tweezie underwhelm in a Magoo-like manner and don’t pop off the track in the same manner as say, Bubba Sparxxx. Maybe more so than anything, it’s Tink that stands out here the most as a vocalist on these productions. However, Tink’s flow feels more like she’s MC Lyte with a hint of Mary J. Blige than an Aaliyah with Missy Elliott tendencies, so we’re left feeling a bit less than fulfilled.

Of the syrupy sweet soul ballad productions NOT bearing one-time One Republic lead vocalist and pop songwriter extraordinaire Ryan Tedder on vocals, it’s “Frenemies,” “Tables Turn” and “Shawty” that on a production level excel. Reverberating basslines and a swirling orchestral vibe anchor Tink and Obsessed’s vocal performances on “Tables Turn,” in which a heartbroken Tink asks if an ex “[if they’re] hurtin’” yet. “Frenemies” is one of the mixtape’s best overall productions, Tink and Syari discovering, especially when Tink says “boy you’ve got some fuckin’ nerve,” and having it fit directly between drum hits and within the “backward playing record” swing, it definitely creates a connection with a listener. “Shawty” features Rich Homie Quan, who, when not reduced to a squawking trap artist on a track actually has a unique color to his vocal that gives the overall song a heavier than top-40 feel. While not a radio single, it’s definitely a noteworthy banger.

For the mixed bag of successes King Stays King delivers, it’s in the epic disappointment of Timbaland making Metro Boomin’ and Zaytoven soundalike trap heaters on songs like the oversexed “Go Ahead (Boo Boo Kitty),” 2 Chainz featuring “This Me, Fuck It” and more that completely underwhelm. Outside of having an interlude about “skeetin’ in a bitch,” and Timbaland proclaiming that he’s “on some ghetto shit,” the track is a quiet riot and features some piano chords in the mix. “This Me, Fuck It,” features an underwhelming 2 Chainz performance in which he sounds deeply influenced by promethazine. The Indian pungi-led melody is unquestionably dope, and feels akin to “Come Around,” a track that M.I.A. shined on in 2007. Migos’ Quavo could’ve delivered here with the energized performance that a track of this caliber deserves.

Without A-list performances, Timbaland’s A-list beats certainly feel like they slip a few notches. For artists like 2 Chainz, Tink, Migos, Young Thug and Rich Homie Quan, the opportunity to shine on a track from a legend didn’t so much showcase any of these artists’ greatness, as much as it highlighted their shortcomings. 2 Chainz seems exhausted, Tink feels out of place, and the trio of Thugger, Migos, and Quan all sound possibly too shined up and ready for pop consumption than ever before. 20 years ago, Timbaland excelled because he was hungry for success, and the artists who recorded on his tracks were, too. Now, as the times have changed, this feels like just another walk-in-the-park for one group of artists and a not-quite-ready for prime time spotlight for others. In total, a producer and artists who have lost a bit of the passion that brought them to stardom reside here, which ultimately causes this mixtape to be less than  successful. Can a king still be considered a king without a crown?