The Game - The Documentary 2 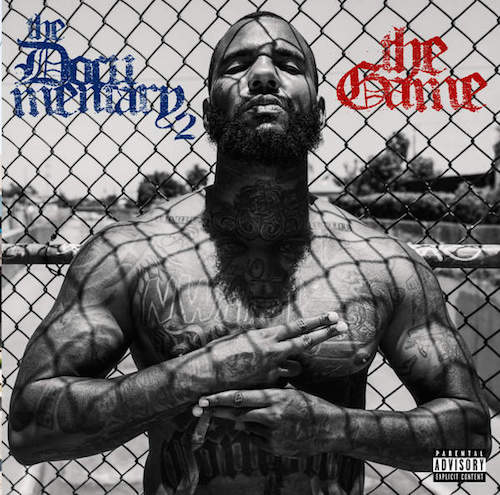 It’s here. After months of song releases, updates, and teasers, Game dropped the first of the two installments of The Documentary 2.

The Documentary sold five million copies and is considered by many to be a new-age West Coast classic. Ten years later, is the sequel more like The Godfather, Part II, or Rocky V?

The title is appropriate; The Documentary 2 finds Game returning to his stomping grounds of Compton, California, in a more consistent and dedicated way than he’s done since his debut. While Compton’s gang life has been Game’s muse for a decade now, the music stays fresh because of how he approaches it.

Game is not simply hollering “Compton!” He’s still providing new, detailed descriptions of his upbringing: “I hopped every backyard on my block/Till I got to Elm Street, took the rag out my sock/And I could have been a Crip, but I ain’t like blue that much/All Crip school, I ain’t really go to school that much,” he rhymes on “Don’t Trip.”

As it was on Dr. Dre’s Compton: A Soundtrack, Kendrick Lamar’s influence is apparent on The Documentary 2. The Game flows more freely, and on multiple tracks, including the Kendrick-featured “On Me,” the production switches up midway through to adjust to the feel of the lyrical content.

Songs bleed into one another, especially those of the same content. “Dollar and a Dream” and “Made in America” are Game’s back-to-back victory laps after a decade of success in Hip Hop, while “Circles,” “Uncle (Skit),” and “Dedicated,” are all part of the same narrative, which deals with his breakup with ex-fiancee Tiffany Cambridge.

It’s these real-life experiences that Game draws from to make music from the heart, and it keeps The Documentary 2 from simply being an ode to his hood.

It helps that Game has, at least in part, shed some of the tired crutches that once defined his music. He still name drops, but not nearly as much, and with his flow and delivery crisper, it’s not as noticeable.

Speaking of flows, he’s more versatile with his cadences and flavor but doesn’t attempt to overtly imitate any one of his featured guests like on album’s past. And while there are many, many features – 18 different guests, to be exact – Game never loses the driver’s seat, even while Kendrick and Ab-Soul shine on “On Me,” and “Dollar and a Dream,” respectively.

The production varies widely, from Johnny Juliano’s and Cardo’s soulful “100,” to Mike WiLL Made-It’s remarkably elegant, piano-driven “Summertime,” to the bouncy “Don’t Trip.” And, because of Game’s West Coast assertions and energy, they all sound like they belong on the same album.

The Documentary 2’s first installment isn’t perfect. It runs a little long and is not without some duds. “Hashtag” is an unnecessary earsore, while “Mula” suffers from subpar production and uninspired braggadocio. “Bitch, You Ain’t Shit,” disappoints following the complex, emotional depth of both “Dedicated” and “Circles,” which immediately preceded it.

Yet, these missteps are few and far between. The vast majority of the album features strong production and some of the best lyricism Game has ever spit: “Now I’m a veteran, spit a 16 sixteen ways/Sixteen in a clip, spit it 16 ways/I know six teens, pull up to a sweet sixteen and spray/I’m like sixteen Jays but the beat I can manage/So every Sweet 16 is like Duke and Kansas,” he cleverly rhymes on the title track.

That’s just one of many bright lyrical moments. Game’s first installment The Documentary 2 is a fine achievement in making the familiar sound fresh. It will be exciting to see what he has in store for the second go-round.