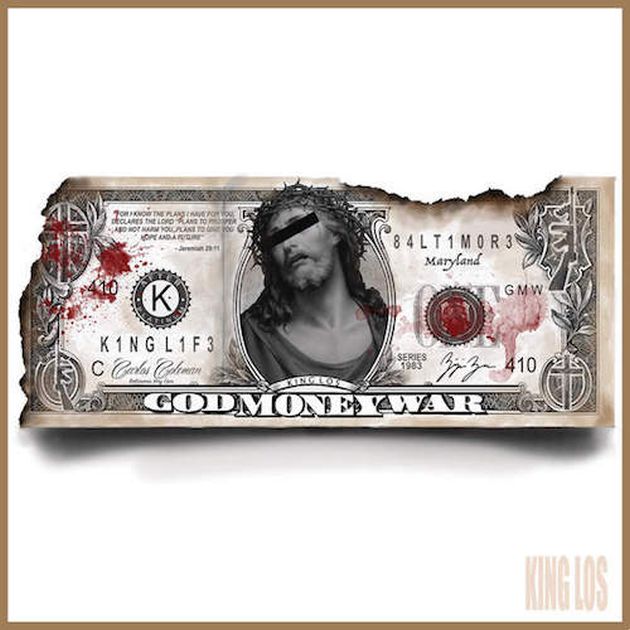 King Los has been running the underground for some time now. Signing with Bad Boy twice (in 2005 and then again in 2012), Los finally settled with RCA and 88 Classic in 2014. His mixtape presence has been vast, releasing fifteen projects over the past seven years through a combination of both major label and independent momentum. Los has been praised for his complex and vivid lyricism. His talents, demonstrated through notable mixtapes have allowed him to gain a core following, but he’s had some trouble puncturing the mainstream. His studio debut God, Money, War, executive produced by Diddy, attempts to stretch that conversation. King Los deviates slightly from his typical lyrical prowess and chooses to embrace a more vital message, but does the politics overpower the music?

Though the title and topics of “God, Money, War” are somewhat generic, Los renovates them through his sophisticated wordplay. On the stirring opener “War,” King Los details a conversation between himself and a friend. “And may these lines live forever like a line should / It’s a war going on and your soul fighting/ So frightening within you I see thunder and both lightening.” The hypocrisy of God, Money, War is also represented in the cover art. A bill is blood-splattered with its edges ripped and burned as a blinded Jesus Christ is centered. The title track “God, Money, War” further illuminates the multiplicity of these themes. “God, Money, War/ If heaven free what we kill for money for/ They say when it rains it pours, but it rain on the poor/ So you ain’t really rich if what’s rich ain’t in your core.” Los’ social consciousness is unswerving from start to finish.

Like in J. Cole’s latest effort, 2014 Forest Hills Drive, King Los embodies his adolescence in both timbre and content on “Ghetto Boy.” Even the production exemplifies a childish and towering sound, but lyrically and musically, he sacrifices artistry for characterization. In general, Los tries to utilize explosive and synth-charged production to electrify his simpler lyrical moments and while they don’t provoke a hard “wow” their simplicity proves Los knows there’s value in beind understood. Even with transparent bars, King Los is a writer, and when the music overpowers his words, the message gets mishandled.

Throughout the album, Los draws more emphasis on pushing a powerful and enlightened agenda over his normal lyrically sharp tongue. Radio attempts like “Can’t Fade Us,” “Blame It On The Money” and “Slave” don’t require the same type of listening and rewind-the-track-to-untangle-his-wordplay as he often delivers. But not all of the more commercially sounding tracks feel surrendered for mass appeal. “Glory To The Lord” is accelerated by gospel vocals, an energetic bassline and taps R. Kelly for a phenomenal guest appearance. Los examines praise through two lenses: being thankful for the come-up and for the mundane: Sporting a rollie, popping bottles and for your baby mama taking you off child support. With the potential to go viral, “Glory To The Lord” rocks as much as it is poignant.

Tackling such broad and universal topics as “God, Money, War,” the inclusion of his son and conveying a more personal form of storytelling on “Lil Black Boy” and “Black Blood” offers refreshing intimacy to the track listing. These back-to-back tracks probe the relationship between father and son. Using his own child as inspiration for the first, Brixton Royal adorably recites a child like alphabet before King Los delves into the beauty of his own son and the tragedy of absent fathers that so many children experience. “Black Blood” takes the topic a step further, as both Los and Isaiah Rashad discuss the losses of their own fathers at a young age, to either murder or abandonment.

God, Money, War feels like the tip of the iceberg for King Los. The fourteen-track debut offers a captivating blend of potential radio records infused with sentimental and political songs. Although the involvement of such lofty production and simpler writing will disappoint some of his day ones, God, Money, War may be the rope that pulls in a much wider audience for King Los, and allows him to push his lyrical and now conscious agenda nationally.