Wale - The Album About Nothing 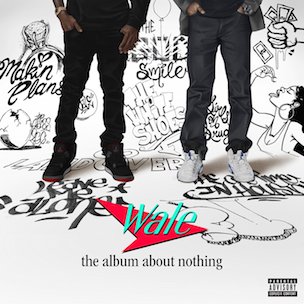 Long before Wale Folarin was a rapper, he was a lead chanter in a go-go band in Washington, DC. The lead chanter’s role is to be a half-singer/half-rapper and constant entertainer, the man responsible for providing a vocal guide into the percussion-driven band’s soulful groove. On latest album The Album About Nothing, in providing the guide to understanding the worlds of superstar comedian Jerry Seinfeld and that of his own superstar rap career, he’s using those well-honed go-go learned skills, but falls short of providing content that allows him to uniquely (and best) use them connect with a now much larger audience.

Similar to the 2010-released mixtape More About Nothing upon which this album is based, this is a thematically powerful release. However, unlike the aforementioned mixtape, this album is oftentimes underwhelming in its songwriting and production, lessening the potentially truly next level impact of the cross-racial and cross-cultural conversation-as-concept.

On last release The Gifted, Folarin coined the term “new black soul” for his sound on Marvin Gaye-style ballad “LoveHateThing.” This album is best when Wale remembers that classic R & B-style musical comfort zone that he created for himself. When he abandons it for trap or gets too close to a similar space in palatably soul-filled rap occupied by Drake, his message loses some of it’s unique effectiveness, much to the detriment of the album.

Given that Drake has released If You’re Reading This It’s Too Late, Pro Reese’s production sampling New Edition’s 1987 hit single “If It Isn’t Love” on trap break-driven and “chopped, not slopped,” “The One Time In Houston” sounds eerily similar in theory to both PartyNextDoor and Noah “40” Shebib’s work with Ginuwine’s 1999 hit “So Anxious” on Drake’s “Legend” and “Madonna,” respectively.

Wale’s laid back vibe over tracks like “EDM”-flavored trap anthem “The Girls on Drugs” doesn’t necessarily impress either. An energetic pop track that samples Janet Jackson’s 1998 dance-flavored single “Go Deep,” the laid back verses don’t impart a similar energy, neither do they work in balance with the production to create a unique vibe. Instead of a Juicy J-style turnup, we’re left with the aural equivalent of a boy and girl separated by air and opportunity doing a two-step slow groove at a middle school dance.

As a rapper, Wale’s approaching the point of being a dependably great lyricist who enjoys using his adeptness at wordplay to uniquely make a point. Combining that stellar skill of Wale’s with the ability of Jerry Seinfeld to relate a joke allows for truly inspired moments like the well-sequenced trio of tracks “The Helium Balloon,” “The White Shoes” and J. Cole-featuring track, “The Pessimist.”

Taking Seinfeld’s comparison of Folarin-as-emcee to a helium balloon and his fans as followers being uplifted via Wale’s talents by holding onto a metaphorical string, “The Helium Balloon” extrapolates into a well-delivered performance. As well, “The White Shoes” is a great conversation about the notion of pride in one’s self in urban communities, while “The Pessimist” is Wale’s response-as-collaboration to many of the issues regarding race and culture discussed on J.Cole’s stellar 2014 Forest Hills Drive.

The best showcase of Wale’s best talents as a soulful chanter who occasionally raps occurs not on milquetoast radio singles “The Body” (featuring Jeremih) and “The Matrimony” (featuring Usher), which feel tacked on haphazardly to the end of the release. Rather, in a style mirroring “Bad,” The Gifted’s underrated radio hit duet with Tiara Thomas (or Rihanna, depending on the version you enjoy), it’s the Musiq Soulchild’s “Just Friends” hook-aping ballad “The Need To Know” that shines. Wale’s “new black soul” is a lovelorn intellectual, much the same as the “old black soul” that his talents best mirror, that of fellow DC-area native Marvin Gaye. SZA appears here and performs admirably as a Tammi Terrell-type collaborator much to this song’s benefit.

On The Album About Nothing, Wale audaciously attempted to once again create poignant social commentary via combining his takes on his existence with those of Jerry Seinfeld doing the same. When Wale showcases his growth in being able to link his classic skillset with modern content, the album unequivocally succeeds. However, in attempting to placate current mainstream tastes, he falls short of the album being the unique and iconic success of the mixtape that truly launched his career to another level five years ago.