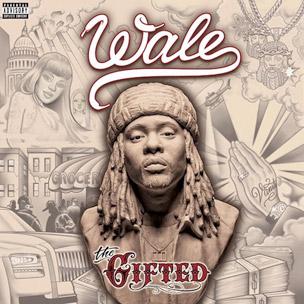 Originally, June 25th was scheduled to be the major release date in June. With Wale, J. Cole, Mac Miller and Fabolous all scheduled to drop products in retail on that day, Hip Hop fans felt they had a lot to look forward to. However, when a popular Chicago rapper/producer decided to drop his project on June 18, lots of things changed. Fab pushed his album back, and J. Cole pushed his album forward, meaning the huge multi-release date in June would arrive one week earlier. Wale stuck to his date, insisting his fans knew the date, and would show up to their favorite physical or online retailer for The Gifted. Those who were patient enough to wait for the release will be rewarded, as The Gifted—while not perfect—is a solid overall project.

“New Black Soul” has been Wale’s mantra in the lead up to the release of The Gifted, and overall, the project definitely has a soulful sound. Wale says that each of the tracks off The Gifted are inspired by his own inspirations, and the leadoff single, “LoveHate Thing” featuring Roc Nation crooner Sam Dew, features a Marvin Gaye sample to fit the “New Black Soul” vibe of the album. While the album definitely leans towards a Soul sound, long-time Wale fans will be happy to hear the DC emcee’s Go-Go influence also presents itself. “Clappers” featuring Juicy J, and what seems to be an extremely short and underwhelming Nicki Minaj feature, samples EU’s “Da Butt.” The track has a high energy club vibe to it, and serves as a decent intermission to the seriousness found on the majority of the album.

Those looking for substance in Hip Hop need look no further than tracks like “Gullible” or “Golden Salvation (Jesus Piece).” While the subject of Jesus pieces has definitely been covered excessively in Hip Hop as of late, Wale’s lyrics separate his effort from the other recently released, similar tracks. Wale raps, “Don’t bow your head for grace, though I’m keeping you graceful / Brothers was born to cheat, though I question who faithful /  Fast for me, nope, Blasphemy though / Rap to it, so racks up, to match up with me froze / How can a diamond supersede my wisdom? /  I seen a reverend with five of me as he read his scripture…” He comes back in the second verse with “Sierra Leone Diamonds, LA to New York got ‘em / If nobody’s stores got me, some probably wouldn’t know about me / All over paparazzi, shout out to Murakami / See they commercialize me, I’m sure there’ll be more robberies…”

The highlight of The Gifted would have to either be the tracks Wale chooses to officially close the album out with, “Black Heroes”, or “88.” But herein lies a problem with Wale that he hasn’t seem to fix throughout his career. “Black Heroes” has a powerful vibe to it, with lines that will definitely persuade you to run the track back a couple times. The same can be said for “88”, however, those who aren’t as up on sports, or sneaker culture for that matter, may find themselves lost on “88” or simply pretending to understand.  Essentially, “88” could be one of the best offerings off the album to some, and to others, a decent song with a strong Just Blaze instrumental.

Overall, The Gifted is a good album. Wale presents substance without being overly preachy, and still takes it back to the Go-Go for those who have been following him since Paint A Picture. While not without its flaws (the “Bad” remix was unnecessary, and probably done simply for the big name feature), those questioning the direction Wale was going post MMG affiliation will more than likely be pleased with The Gifted.